The St. Louis Blues will open up their season on Saturday, Oct. 15 versus the Columbus Blue Jackets at the Enterprise Center. Similar to last season, there are multiple days between the Blues’ season opener and the league’s season opener, but that shouldn’t affect the Blues’ performance.

The Blues are looking to build off of their performance last season, tallying 109 regular season points and reaching the second round of the playoffs. In this roundtable article, our Blues team at The Hockey Writers will make predictions for the 2022-23 season. This article covers answers from myself, Stephen Ground, Mike Meyer, and Marcus Ashpaugh.

Who Will Score the Most Points?

I’m going to go with Jordan Kyrou here, his upside and skill are unmatched on this roster. He broke out last season with 75 points in 74 games even after a slow second half. He’s likely to expand his role with David Perron leaving in free agency, meaning that Kyrou will be playing top-six minutes as opposed to bouncing around the lineup. Kyrou has the potential to score 100 points, but even if he fails to reach that, anywhere above 80 points will suffice.

I think Kyrou will be the team’s leading scorer. The Blues lost Perron in the offseason, and they need to replace his scoring on the wing. Jake Neighbours isn’t going to do that. And Vladimir Tarasenko is likely to take a step back, even if that’s to the 65-70 point region. But Kyrou will continue to progress. I expect him to chase 100 points.

The most points this season, should he remain healthy, will be Tarasenko. His explosive level of play and goal-scoring ability is second to none on this squad. With the departure of Perron, Tarasenko should remain a top option at even-strength and the man advantage.

Right now, the chemistry on the Buchnevich – Thomas – Tarasenko line leads me to believe that it’s going to be one of those three. For the sake of not having a repeat of last season, I’m going to say that Pavel Buchnevich will lead the Blues in points in 2022-23. If not him, then it’ll be either Tarasenko or Kyrou.

Who Will be the Blues’ Most Valuable Player (MVP)?

When it comes to a player’s overall impact on the ice, it doesn’t get much more impactful than Buchnevich. He can literally do everything while scoring 30-plus goals and 70-plus points. Buchnevich’s versatility and chemistry with the best forwards on the team is only growing, he is set up for a major second season in St. Louis. I’ll go with him as the team’s MVP for his overall impact and ability.

The Blues took a huge gamble this summer. They couldn’t afford to keep Ville Husso, obviously, but not finding any better solution than Thomas Greiss is a massive risk. Binnington will have to shoulder the load after struggling consistently all last season. But I think he is going to do it. Binnington seems to thrive when he’s the clear #1, and he’ll have to start 55-60 games this season. If he can play as he did in his brief playoff stint last year, he’ll look a lot like the goalie the Blues fell in love with during his first season. And he’ll compete for a Vezina Trophy.

The team’s MVP this season will be Schenn. He was injured off and on and played through injuries for a majority of last season. This season he has come back looking healthy and engaging in all areas of the ice, with and without the puck. Despite the injury, he still managed to produce 24 goals and 58 points over 62 games last season and should look to continue his physical style of play this season.

I think the Blues’ MVP is going to come from the center position. O’Reilly and Thomas are both so involved in everything this team does, whether in 5-on-5, the power play, or the penalty kill. With his outstanding skill and penchant for passing the puck and facilitating plays, I think Thomas is going to be the Blues’ team MVP next season. I could also see O’Reilly being the MVP as well, but that would be based more on being a complete player on both ends and less on overall point totals.

The Most Surprising Player

I think Torey Krug is about to have a major season for the Blues. As long as he’s healthy, he is the driving offensive force from the blue line. I would go as far as to say that he will have a career season with over 60 points and lead the Blues to another elite season with one of the league’s top power plays. Both he and Justin Faulk will be essential for the success of the Blues, if they can’t stay healthy, the team is in trouble.

He will have to make a major step forward with Perron leaving, but he’ll do it well. I expect a career-high in points, pushing towards 60.

The 29-year-old Josh Leivo has not looked out of place over preseason play and has done everything possible to earn a spot in the lineup. He played only seven games in the NHL last season scoring one goal and three points.

However, he claimed the title of MVP of the 2022 Calder Cup playoffs after recording 15 points and 14 assists in 18 postseason games with the Chicago Wolves, leading them to a championship title. I expect him to make the club and be an under-the-radar player for them this season.

This is a tough one. There were so many surprises and breakouts for the Blues in 2021-22, and with them returning most of that same roster for 2022-23, picking someone to surprise is tricky. With all that said, there are still a few players who could truly surprise for this upcoming season. I’m going with forward Logan Brown. He’s been on fire this preseason and appears to be well on his way to earning a spot in the lineup. I could see him scoring around 20 goals and 45-50 points when the season is said and done.

The Most Disappointing Player

I’m not saying that Barbashev will have a bad season, but he won’t do what he did last season. His role is likely to remain the same as a third-line versatility forward. However, I believe that his production will be down to near where it was before a breakout season in 2021-22. Barbashev won’t be viewed as a bad player, but it would be disappointing to see his production fall off that much.

Fans who are looking for Parayko to become something he’s not, and suddenly be the second coming of Alex Pietrangelo, will be sorely disappointed. He might be fine this year, but he isn’t suddenly going to make the eight-year contract extensions seem like a good idea.

After securing a one-year extension, Klim Kostin has not looked like he deserves a role in the NHL. The former first-round draft choice by the Blues in 2017 has yet to prove he belongs in the NHL and that it may be a while before he ever earns one.

I don’t want to answer this question, this isn’t fun. But for the sake of this piece, I’ll go with defenseman Nick Leddy. I don’t think he will be disappointing in terms of his overall statistics, but more so because he won’t be the true piece the Blues were looking for to solidify their blue line. He’s sorely needed now with the injuries of Marco Scandella and Scott Perunovich, but I don’t think he’s going to be the stalwart the team needs.

This team still has explosive offensive forwards and a motivated Binnington looking to get back to All-Star status. If they can stay healthy, they should finish second or third in the Central Division. The losses of Husso and Perron will be on display in certain parts of the season, which is why they’ll have fewer points than 2021-22.

The Blues are going to take a big step back overall and be on the playoff bubble this year. Losing Perron really hurts. Losing Husso really hurts. They haven’t added anything of any significance. On top of that, they had absurdly high shooting percentages across the board last season.

Over the last three full seasons, the Blues have averaged 100.6 points per season, disregarding the 2020-21 shortened season. With the depth and talent level that the Blues possess, a season eclipsing 100 points should be well within reach.

I think they’ll be between 96 – 110 points, so I’ll split the difference and say 103 total points. I think the offense as a whole will be slightly less potent than it was last season – partly due to Perron now missing from the power play. But they’re still good enough to be one of the better teams in the Central Division.

The Colorado Avalanche are still the kings of the division, but all signs point to the Minnesota Wild taking a step back, it’s hard to know what exactly you’ll get from Nashville Predators and Winnipeg Jets, and Dallas Stars may no longer have their best player in Jason Robertson by the time this article comes out. I absolutely think this team could do better than 103 points (109 in 2021-22), but I don’t think they’ll do much worse than that. To me, they’re clearly the second-best team in this division and shouldn’t have an issue making the playoffs.

I predict that it will be the same result as last season in the playoffs with a second-round loss to the Avalanche. The Blues can certainly push and shove the Avalanche around to a seven-game series, but winning that game is a difficult task. The Blues will match up well with any first-round opponent, but it gets far more difficult with a team like the Avalanche waiting in the second round.

The Blues are a Wild Card Bubble/First-Round Exit team. As I said, they’ll still be a good team and they’ll probably make the playoffs, but they won’t be a Stanley Cup Contender by any means.

I believe the Blues make the playoffs and have enough talent to win a round or two. The squad is proving their depth is a valuable asset and will ultimately be their downfall if they are to push for another Stanley Cup.

The Blues are going to make the 2023 Stanley Cup playoffs. Unfortunately, I fear that the end result will be similar to that of the 2022 playoffs.

It likely won’t be at the hands of the Avalanche again, but I think it’s possible they advance through the first round before being bounced in the conference semifinals. If they can maintain strong defense and goaltending, the offense is enough to carry this team past this point. However, ultimately I think they’ll fall short of the Stanley Cup.

The overall consensus from all four of us is that the Blues be good and competitive in 2022-23. Obviously, the goal is to win a Cup, but that’s going to be difficult to accomplish with the current roster. There is still a lot to look forward to this season and be sure to check out all of our work here at The Hockey Writers as another season is almost upon us.

Ethan Carter has been writing at The Hockey Writers for over three years now. He also co-hosts The Blue Note Podcast for the Bleav Network, which covers the Blues and the NHL multiple times per week. 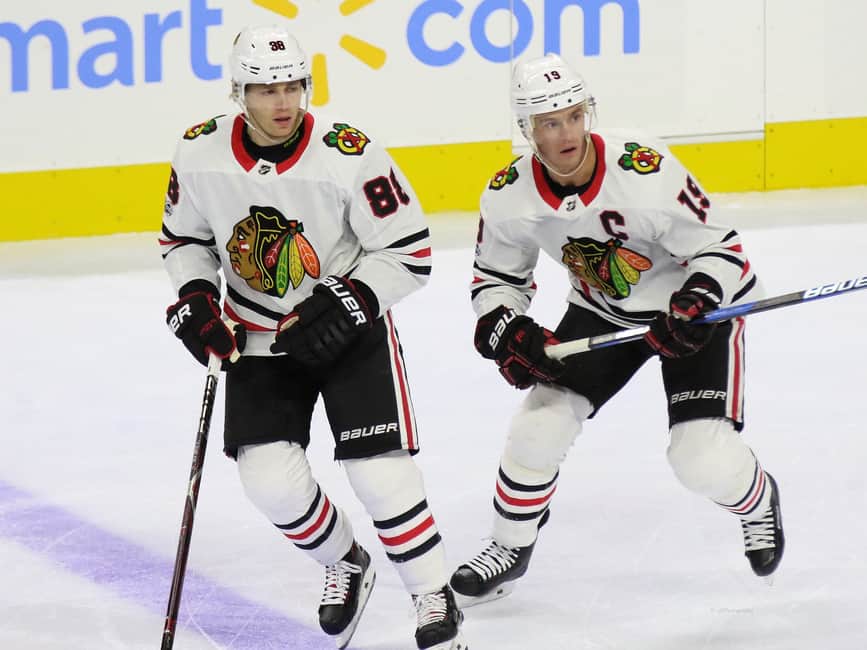 Blackhawks Are Smart to Reunite Kane & Toews on a Line