David Hardisty @clutchfans
Woj says one NBA executive told him that drafting Victor Wembanyama may add as much as $500 million to the value of that NBA franchise. – 7:22 PM

Alex Kennedy @AlexKennedyNBA
If the NBA reset all 30 rosters and did a start-up draft tomorrow, how high would Victor Wembanyama be selected? Top-5? Top-3? 🤔
The hype is crazy, but it seems 100% warranted. – 7:07 PM

Oleh Kosel @OlehKosel
Imagine if the Lakers suffer though another miserable season & wind up winning the 2023 lottery. It would be game over for the rest of the league, with the Pelicans owning swap rights for LA’s first-rounder.
CJ McCollum
Herb Jones
Brandon Ingram
Zion Williamson
Victor Wembanyama – 6:11 PM

Ben Golliver @BenGolliver
Victor Wembanyama on LeBron James calling him “generational”: “It’s obviously an honor to see such great people talk like this about me, but it doesn’t change anything. … I didn’t do anything yet. I didn’t play a game in the NBA yet. I wasn’t drafted. I’ve got to stay focused.” pic.twitter.com/7jfMiTWkVU – 6:10 PM

Christos Tsaltas @Tsaltas46
Ιn February 2021, I asked @Evan Fournier about French rising star, Victor Wembanyama. “He’s taller than Rudy Gobert. His skill set at that age. His length is just incredible. He can do everything on the floor”
Prophetic words: “You’re going to hear about him very soon. Trust me!” pic.twitter.com/2US0aHpnaV – 6:09 PM

Tim Reynolds @ByTimReynolds
Asked Rudy when’s the last time he stood next to someone taller than he is: “Boban,” he said.
Other than that, Victor Wembanyama might be the only one. – 6:01 PM

David Locke @DLocke09
If the NBA hadn’t flattened the lottery odds we would have seen a team go 5-77 this year after watching Victor Wembanyama this week – 5:46 PM 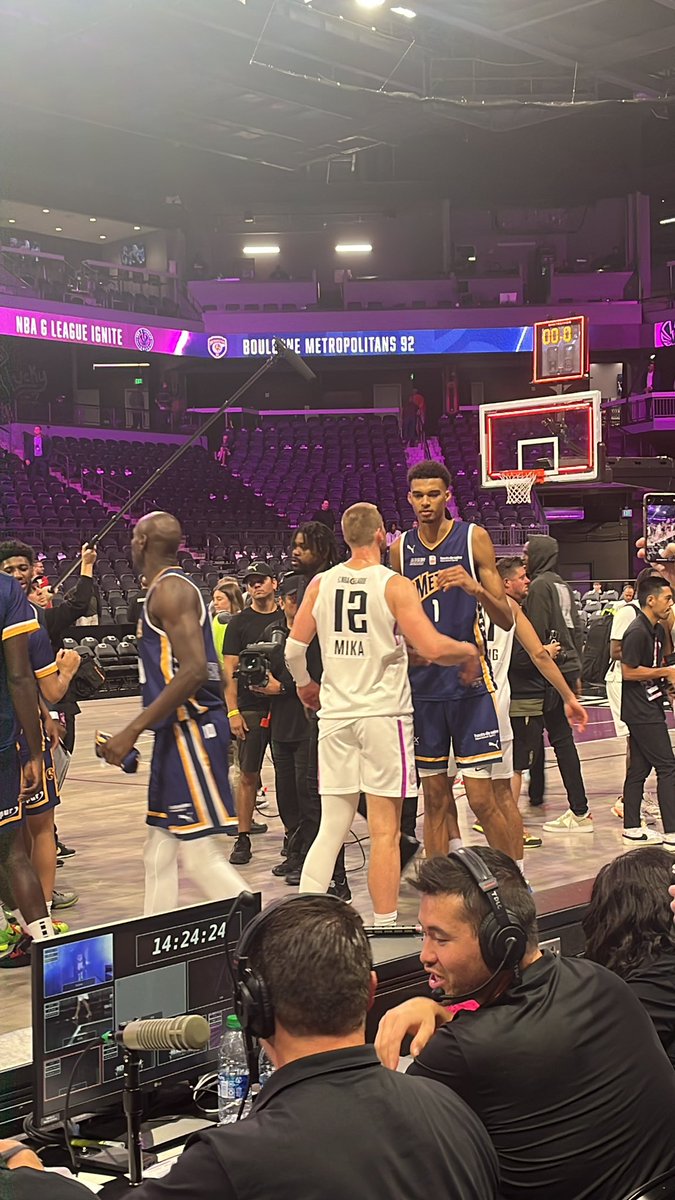 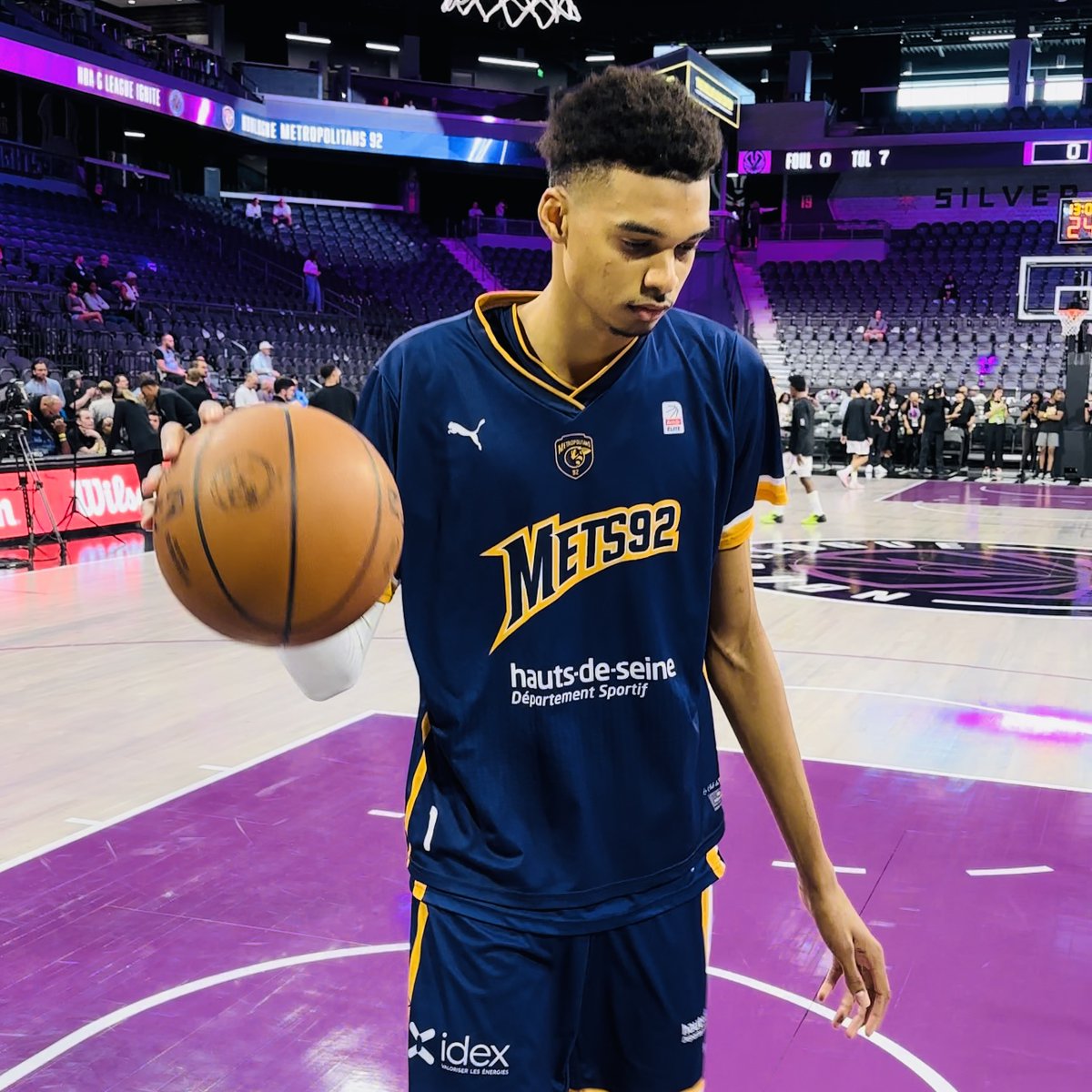 Sam Quinn @SamQuinnCBS
I truly don’t ever remember a single player at any level producing as many highlights in one game as Victor Wembanyama has today. There have been like eight separate holy shit plays – 5:02 PM

Mike Finger @mikefinger
We are less than 90 game-minutes into the Victor Wembanyama-in-America experience and the stupidly, preposterously, hilariously absurd already is becoming kind of old hat. – 5:00 PM

Brandon Rahbar @BrandonRahbar
If the NBA didn’t flatten the draft lottery odds, we would’ve seen teams scoring on their own basket and signing dudes from local YMCAs to try to land Victor Wembanyama.
OKC was the single visionary team to vote against the flattened odds. – 4:41 PM

Kevin Pelton @kpelton
I can’t tell if that was a bad lob by Hugo Besson or he just knew Victor Wembanyama would dunk more spectacularly the farther away from the rim he threw it. – 4:01 PM

Kevin Pelton @kpelton
I’d like to see Victor Wembanyama add the one-hand pass off the dribble and also this is a ridiculous thing to say about someone 7-foot-4. – 3:12 PM

Tony Jones @Tjonesonthenba
Like every team in the league, the Utah Jazz would love to employ Victor Wembanyama next season. They also want to introduce winning habits to their current team. This story looks at the delicate balance, and the famous T word. Please read, here – theathletic.com/3663529/2022/1… – 1:51 PM

David Aldridge @davidaldridgedc
Adam Silver, in Abu Dhabi for the Hawks-Bucks preseason game, is asked about Victor Wembanyama: “I know that many of our NBA teams are salivating at the notion that potentially, through our Lottery, that they could get him– so they should all still compete very hard next season.” – 10:32 AM

Adrian Wojnarowski @wojespn
Reporting with @draftexpress: As NBA executives consider the transformative impact 7-foot-4 Victor Wembanyama could impose on the NBA’s tanking and trade market, his agent Bouna Ndiaye insists there’s no plan to shut down the projected No. 1 pick: espn.com/nba/story/_/id… – 9:59 AM

Marc J. Spears @MarcJSpears
Scoot Henderson focuses on himself in pursuit of No. 1 in the 2023 #NBA draft. The elite prospect discusses competing for the top spot with Victor Wembanyama and the backhanded compliment, buying a gym at 18 years old and starting for the G League Ignite. bit.ly/3e9HlSB – 8:44 AM

Alex Kennedy @AlexKennedyNBA
LeBron on Victor Wembanyama: “Everybody has been a ‘unicorn’ over the last couple years, but he’s more like an alien. I’ve never seen — no one’s ever seen — anyone as tall as he is but as fluid and graceful as he is… He’s for sure a generational talent.” basketballnews.com/stories/lebron… – 6:25 AM

Michael Scotto @MikeAScotto
LeBron James on Victor Wembanyama: “Everybody’s been a unicorn over the last few years, but he’s more like an alien. No one has ever seen anyone as tall as he is but as fluid and as graceful as he is out on the floor… He’s for sure a generational talent.” – 1:18 AM

Kevin Pelton @kpelton
New YouTube video breaking down what I saw from Scoot Henderson and Victor Wembanyama in their anticipated first matchup Tuesday that more than lived up to the hype: bit.ly/3MdN06Q – 9:34 PM

Mike Finger @mikefinger
Victor Wembanyama, on if he feels more famous today than he did yesterday:
“A little bit.”
On what he wants to do in Vegas before he leaves:
“I don’t plan on gambling at all.”
On if he’s sick of us yet:
“Yes. I’m joking. Please don’t write bad about me.” – 8:19 PM

“I had the chance to watch him in play in 2021, a year ago, for the first time because my little brother, Kostas, played for ASVEL and they were teammates. And he’s incredible, man,” Antetokounmpo said while shaking his head. “I believe in 2045, everybody [in the NBA] is going to look like Victor! But his skills, the way he can shoot the ball, the way he can move, he’s extremely fast for his size, he can block shots, he can be a threat on the defensive end — he’s unbelievable. I believe it’s only a matter of time until he’s in the league. For him, the key is just to keep getting better, keep staying humble and stay healthy. With a body like that and a skill set like that, as long as he stays healthy, he’s going to keep improving. And keep enjoying the game as much as he can. -via basketballnews.com / October 6, 2022
To leave a comment, you will need to

if you already have an account. Typed comments will be lost if you are not signed in.