There are no plans to trade Damian Lillard, a source familiar with the situation told SI, and teams have stopped asking. But Portland knows it needs to show Lillard something. Buzz among NBA execs is that the Blazers will turn their attention to Pistons swingman Jerami Grant. Grant’s salary ($20 million) fits into the trade exception, he’s under contract for next season and a Lillard/Grant/Anfernee Simons trio on the perimeter is a decent foundation to build on.
Source: Chris Mannix @ Sports Illustrated

Kurt Helin @basketballtalk
Lillard says goodbye to McCollum on Instagram, “Grateful for our brotherhood” nba.nbcsports.com/2022/02/09/lil… – 10:27 AM

Tom Haberstroh @tomhaberstroh
🏀 HABERSHOW w/ @Amin Elhassan 🏀
The sneaky signal of the CJ McCollum trade — What it means for Damian Lillard and the rest of the NBA. Big changes are happening 👁
🍎: https://t.co/YxFfFtasYw

Duvalier Johnson @DuvalierJohnson
Knew Portland would lose tonight with a big trade and not having Lillard, but not like this. pic.twitter.com/0RiYF1zrLY – 1:28 AM 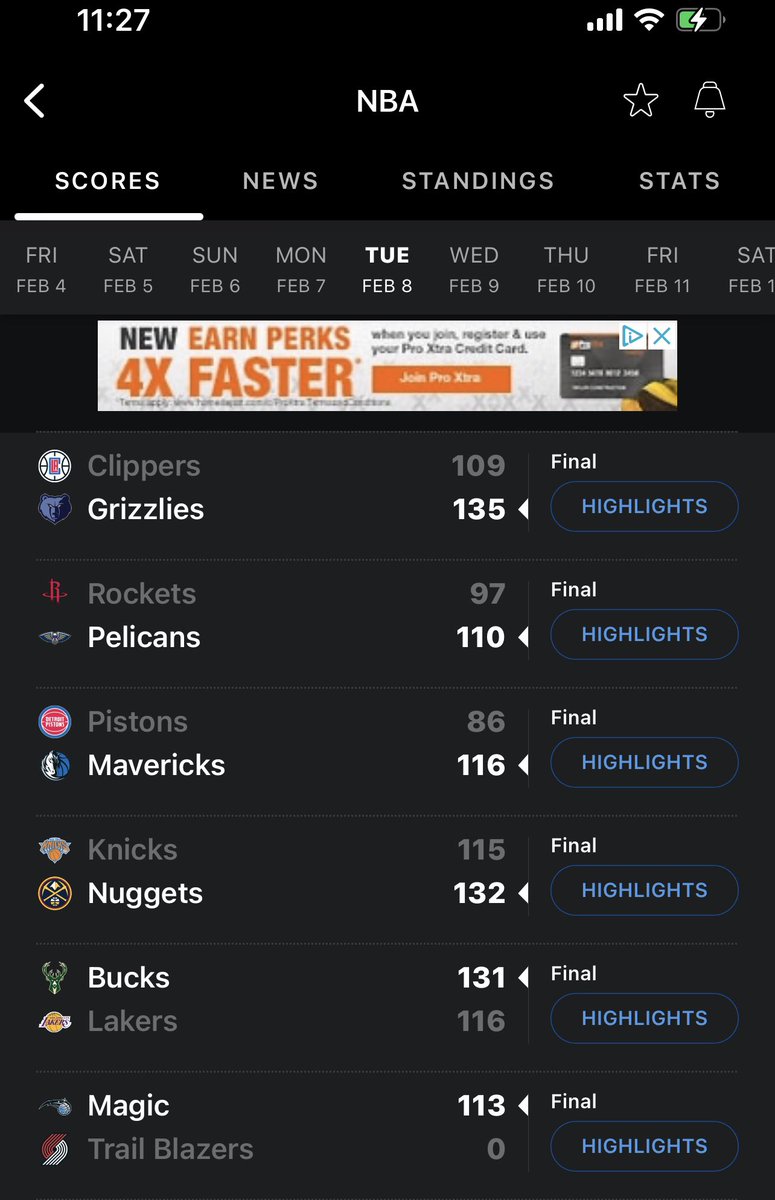 David Locke @DLocke09
TRADE INSTANT REACTION – CJ McCollum to the Pelicans
Some interesting comments from the Local Experts @Jake Madison of @lockedonpels and @Mike Richman of @LockedOnBlazers
“Damian was involved in this. This happened with Dame’s approval”
youtu.be/SwWHrWNDmqw via @YouTube – 11:37 PM

David Hardisty @clutchfans
The Lakers just gave up 78 in the first half at home, Russ is struggling again and “Dame to the Lakers” is trending. Let me guess… THT, Nunn and a first? pic.twitter.com/fP9qpqcvcF – 11:08 PM

David MacKay @DavidMacKayNBA
It’s kind of humorous how many of Olshey’s final moves that were supposed to be the support Lillard needed have now been undone.
Snell? Gone. Zeller? Gone. Nance? Gone. Even Powell and Covington? Gone.
Almost like Olshey’s vision for contention was a complete load. – 9:13 PM 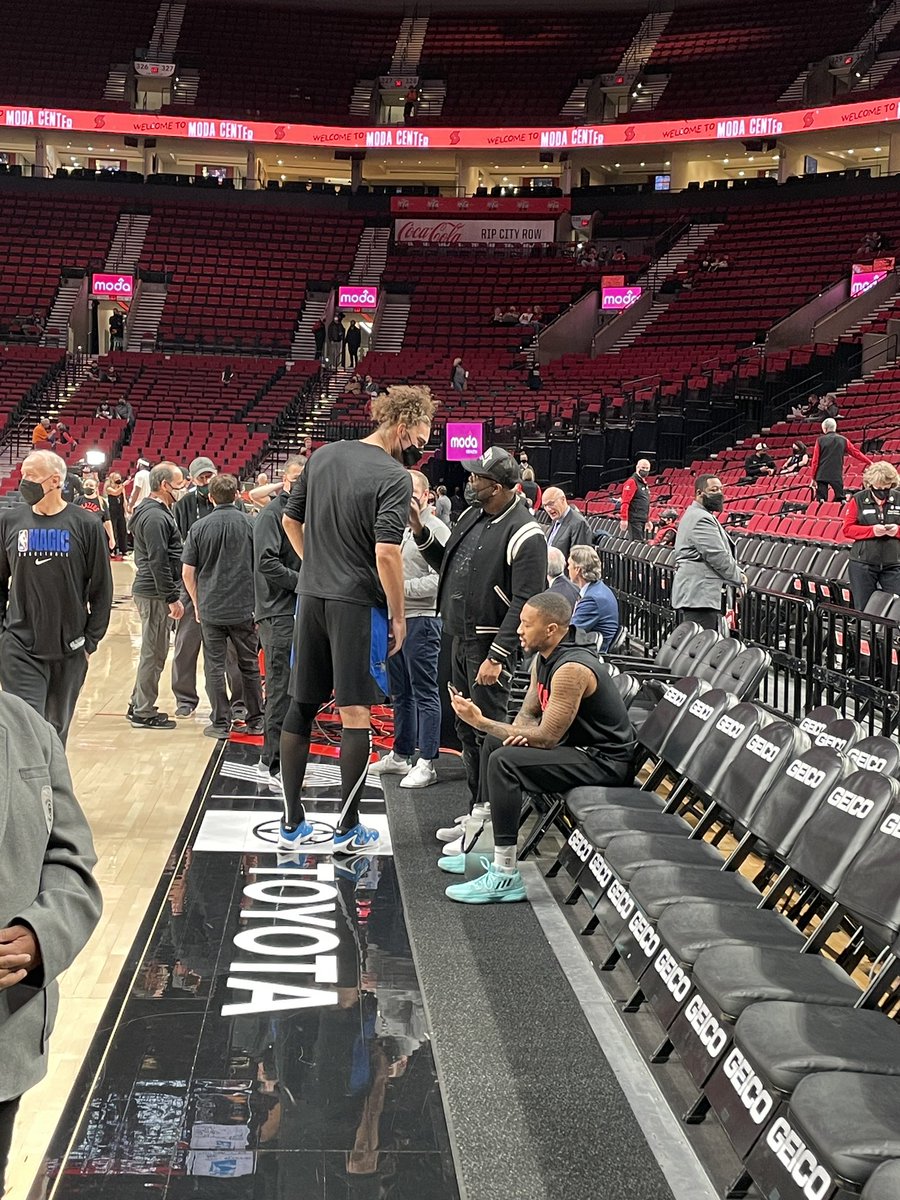 Sean Highkin @highkin
Damian Lillard two months ago when I asked him about fan/media expressing of “concern” that he should ask out: “They don’t know my life. I go out here and I answer these questions over and over again, and somehow still it’s people skeptical of what I say.” bleacherreport.com/articles/10020… – 3:16 PM

Brad Botkin @bradbotkincbs
Blazers just went draft day trading a bunch of stuff to get right back to where they started, if they’re lucky. Problem is, this isn’t a movie. I would bet good money Lillard is gone within a year – 3:04 PM

Aaron J. Fentress @AaronJFentress
1) Be clear on this: Even if the Blazers fail to rebuild this thing, the bottom line is that they had to take advantage of this opportunity to blow it up.
They were NEVER going to win a title with Lillard/CJ as their best 2 players. I’ve been saying that since Talkin’ Ball 2016 pic.twitter.com/KW94Ld9UMB – 2:50 PM 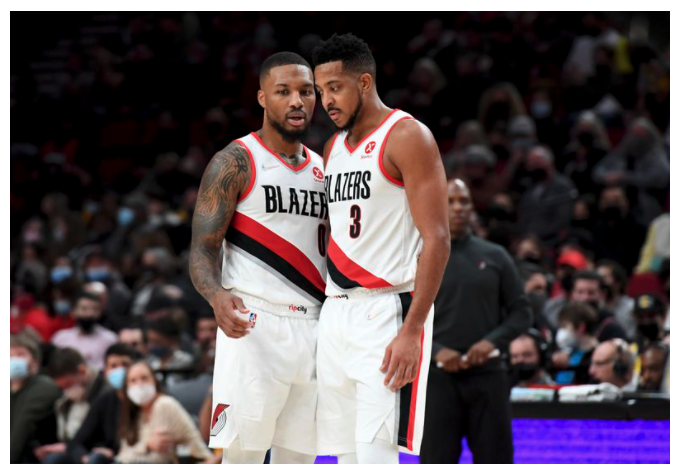 Brad Botkin @bradbotkincbs
I can’t see a way not to trade Lillard. – 2:40 PM

Tas Melas @TasMelas
The Pelicans trade for CJ McCollum! Instant grades and reaction podcast! And what does this mean for Lillard? The boys are torn.
ａｎｏｔｈｅｒ
ｃｌａｓｓｉｃ
📼: https://t.co/hIq5TpS8ch
🍎: https://t.co/XjSclyKw9q 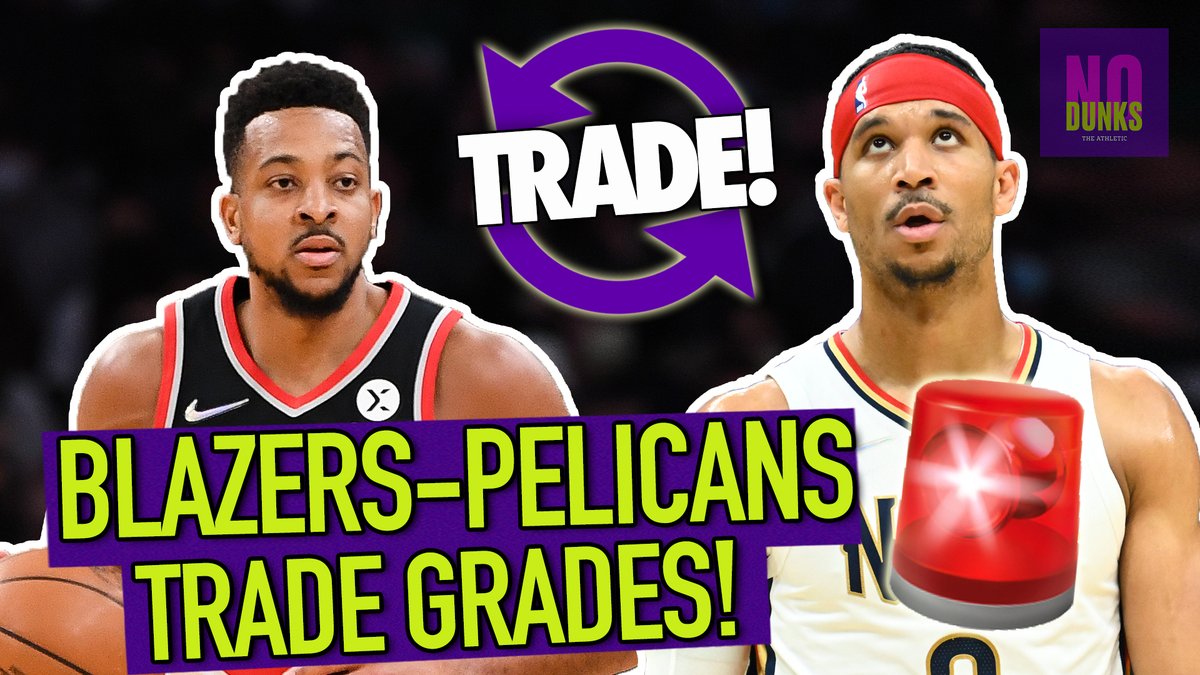 Aaron J. Fentress @AaronJFentress
I’ve been told numerous times that Damian Lillard is absolutely onboard with the retooling of the Blazers roster given that this season is a bust.
I suggest that panicking fans all up in their feelings simply relax and let it all play out. That’s what Lillard is doing. – 1:15 PM

Andy Larsen @andyblarsen
At the Tribune, we’re doing a trade deadline live blog to discuss all of the Jazz-impacting news and rumors over the next couple of days.
First update: 1,000 words on the Blazers/Pellies deal. Does this set up a Dame trade?
sltrib.com/sports/jazz/20… – 12:51 PM

Justin Kubatko @jkubatko
CJ McCollum and Damian Lillard had six seasons in which they each averaged at least 20 PPG while playing 60% of their team’s games.
That’s the second-most such seasons in NBA history by a duo:
8 – Baylor & West
6 – Lillard & McCollum
5 – Bryant & O’Neal
5 – Curry & Thompson pic.twitter.com/AYDwIAkrYm – 12:11 PM 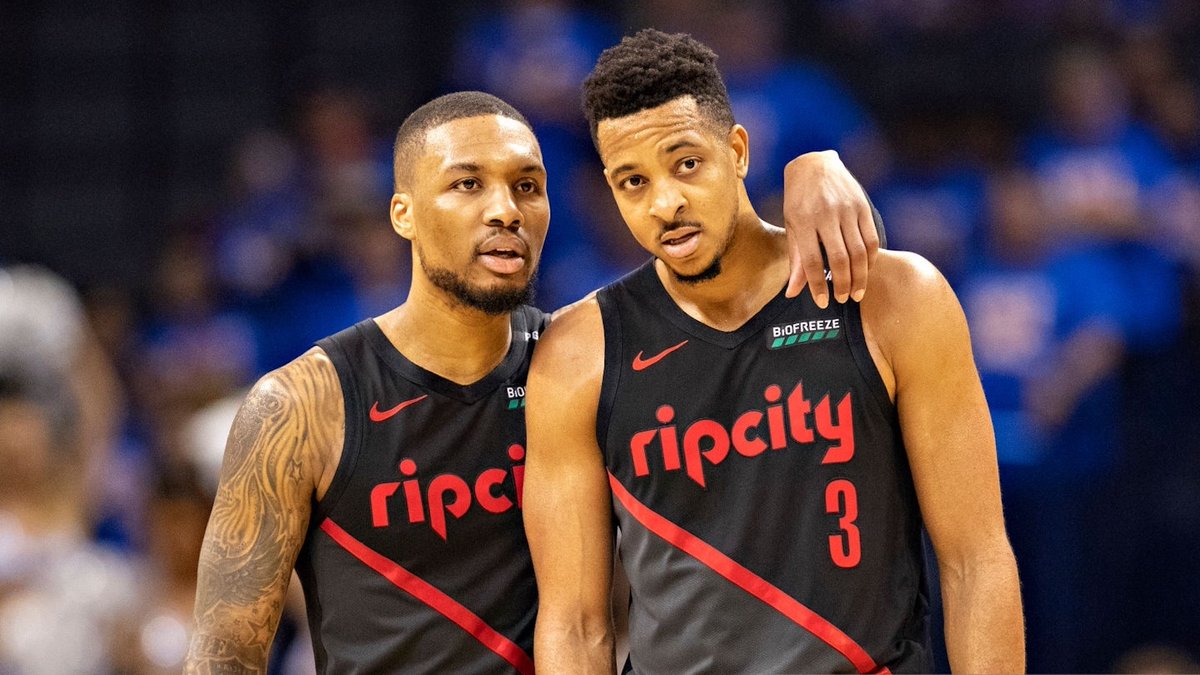 David Hardisty @clutchfans
All James Harden has to do this offseason is put out word that he’s willing to pair up with Damian Lillard in Portland and Brooklyn will trade him anywhere he wants to go. – 11:45 AM

JD Shaw @JShawNBA
Poll: Has Damian Lillard played his final game in a Blazers uniform? – 11:43 AM

Kyle Neubeck @KyleNeubeck
I get why everyone is focused on the Dame angle in Portland. But if the Sixers wanted to open a max slot in the summer to sign a certain someone, the Blazers are now potentially a lot more useful to them on that front (and from the looks of things, not exactly being managed well) – 11:41 AM

Aaron J. Fentress @AaronJFentress
The Blazers have now moved two contracts belonging to small guards that were worth a combined $140 mill and now have just 2 small guards from the regular rotation remaining on the roster, Lillard and Simons.
All of that money, in a variety of ways, will go elsewhere. – 11:30 AM

Sean Highkin @highkin
Wherever anyone wants to land on this trade being good or bad, Dame has known what the plan was since he decided to have surgery. What they got back in this trade isn’t going to move the needle one way or the other on him doing the thing he’s repeatedly said he’s not going to do. – 11:21 AM

Michael Singer @msinger
I’ve always thought part of the reason Dame never “asked” out of Portland was out of loyalty. With regard to the optics, it’s a helluva lot easier to leave now — and save face given that you were last one there — considering what’s around him. – 11:17 AM

Kellan Olson @KellanOlson
I wonder if the Blazers making that move now makes any other teams hold at the deadline for the Dame sweepstakes this offseason – 11:17 AM

Keith Smith @KeithSmithNBA
29 teams should at least ask what the price is for Dame at this point. You might be really surprised at the rate this is going. – 11:07 AM

Dan Favale @danfavale
at the risk of being too soapbox-y: portland is clearly talking to dame throughout all of this. he’s either on board, or they’ve provided him more than adequate cover if/when he asks for a trade. – 11:06 AM

Kristian Winfield @Krisplashed
With CJ McCollum gone, is Damian Lillard next? – 11:06 AM

JD Shaw @JShawNBA
All eyes should be on Damian Lillard, Jusuf Nurkic and the Blazers, as Portland hasn’t exactly improved from these trades. The team could still push its chips in to acquire more talent, but they haven’t done so yet. – 11:04 AM

Marc Stein @TheSteinLine
This much is clear in Portland: Teams will be emboldened to pursue Damian Lillard in the offseason once the Blazers complete their expected trade of CJ McCollum to New Orleans. Can’t speak to Lillard’s intentions but he’ll be chased even harder now.
More: marcstein.substack.com – 10:57 AM

Keith Smith @KeithSmithNBA
Damian Lillard in the Blazers locker room after he gets back from surgery: pic.twitter.com/gteOlQ63rx – 10:45 AM

Kamenetzky Brothers @KamBrothers
Who knows how long Lillard will actually stay in Portland, but Josh Hart is a great fit alongside him, should Dame/the Blazers decide to stick it out. AK – 10:38 AM

Jabari Davis @JabariDavisNBA
Alright, so where is Dame headed? Asking for a friend. I’m the friend. – 10:30 AM 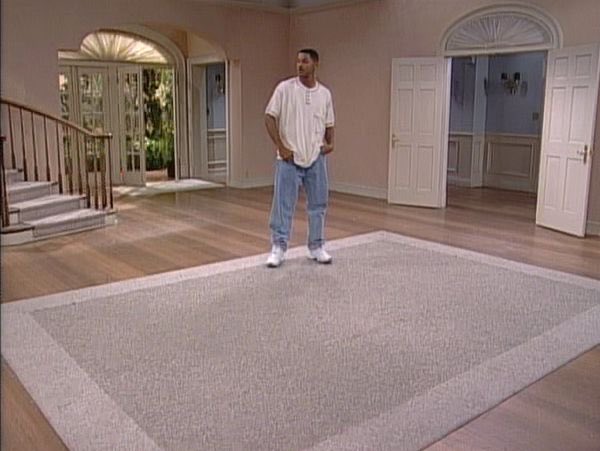 Ryan McDonald @ryanwmcdonald
New Orleans has taken care of both “the Jazz need to break up Rudy Gobert and Derrick Favors” and “the Blazers need to break up Damian Lillard and CJ McCollum” – 10:25 AM

Myles Turner is expected to remain in Indiana past the deadline, a source with knowledge of the Pacers’ thinking told SI, though several teams have inquired about the springy center. (A Turner-Jerami Grant swap has been discussed.) Indiana figured out long ago the Sabonis-Turner frontcourt combo wasn’t working, and with Sabonis gone, the Pacers will likely go into next season with Turner anchoring the frontcourt. -via Sports Illustrated / February 9, 2022
Losing out on the Sabonis sweepstakes may cause Sheppard to circle the block in desperation, but league sources tell me Pistons GM Troy Weaver is “totally fine with hanging on to Grant past the deadline and working towards some possible sign-and-trade scenarios in the offseason if needed.” -via May-Oh? Washington Wizards Newsletter / February 9, 2022
Adrian Wojnarowski: Let’s start with Jerami Grant in Detroit and remember he’s got another year on his contract. This is a Detroit team that is perfectly willing to wait at the draft, into the offseason with Jerami Grant. If the trade deadline were in an hour, I’m told they don’t really have anything right now that they’d be ready to move on. -via YouTube / February 8, 2022