Anthony Davis hadn’t played since Valentine’s Day thanks to a calf injury he suffered against the Denver Nuggets, but on Thursday, the star center made his long-awaited return to the floor. The results, in a vacuum, weren’t exactly what the Los Angeles Lakers were looking for. In 17 minutes of action, Davis scored only four points on 2-of-10 shooting. The Lakers were outscored by 11 points with Davis on the floor and were ultimately defeated 115-111 by the Dallas Mavericks. With Dallas now only two games behind the Lakers in the loss column and a tiebreaker-determining rematch coming on Sunday, the Lakers will need Davis back at full strength as quickly as possible.

Fortunately, there were encouraging signs on Thursday. Davis wasn’t his usual, game-wrecking self, but there were glimpses of his supreme athleticism and the impact it has on opponents in the loss. So let’s look through the good, the bad and the ugly in Davis’ first appearance in over two months.

Davis is a bit too eager to settle for jumpers even in the best of times. It was only natural that he would lean on it while his body is still recovering. Six of his 10 field goal attempts were jumpers, and they had to be. Davis still isn’t quite conditioned well enough to show off his typical array of scoring moves. His shots largely came off of spot-ups and simple post-ups, but in spots, he at least proved that he can still punish defenders in those situations. Dallas tried to put Dorian Finney-Smith on him at one point. It didn’t go well.

They learned from their mistake and started doubling him thereafter, but Davis has evolved enough as a passer since joining the Lakers to take advantage of that as well.

The Lakers didn’t force the issue offensively. That’s going to take time, and the stats would look far better if he’d just made an extra jumper or two. As he recovers fully, the Lakers will presumably start running more offense through him, and he’ll be athletically capable of scoring in the wider variety of ways that he typically does.

The Lakers wanted to protect Davis defensively by giving him easier assignments earlier on. He started the game on Finney-Smith, a catch-and-shoot wing, but Davis still found ways to impact the game. Watch as he manipulates Luka Doncic with his eyes on this play. Doncic thinks he’s drawn Davis far enough away from Finney-Smith to make this pass, but this is Davis we’re talking about, so naturally, Luka was wrong and the pass was stolen.

The game of cat-and-mouse between Doncic and Davis was one of the predominant strategic battles of the first half. Doncic got the better of Davis on a few occasions, but Davis had his share of victories as well. On this play, Davis slinks under the basket with Doncic already in the air. Doncic panics and that causes the turnover.

If anything Davis got a bit overeager on a few occasions, a natural reaction to missing two months. He moves a bit too far off of Dwight Powell on this drive and then compounds that mistake by getting caught in the air too early. Powell slips underneath him and gets the easy layup as Davis descends.

He closes out a bit too hard on Josh Richardson here, and that creates a clean mid-range look.

Davis typically has impeccable timing, and it’s clearly been affected by his time off. It’s nothing to worry about in the grand scheme of things, but it threw him off against Dallas. The big plays are the takeaway here. In his first game back, Davis could still get high enough to block 7-3 Kristaps Porzingis.

Davis should have answered any lingering individual questions about how his health would impact his defense with his personal performance against the Mavericks. The greater question here has less to do with Davis and more to do with his teammates.

Davis is so transcendent defensively that fitting in with him largely amounts to not making mistakes. If you’re in the right place at the right time, you don’t need to make superhuman plays or blow up every single action. Davis has that covered. The other Laker centers have figured that out by now. The Davis-Marc Gasol combination has allowed only 104.3 points per 100 possessions this season, per Cleaning the Glass. Things weren’t quite as crisp with Drummond on the floor as a number of defensive foibles led to free points.

Take this pick-and-roll. Drummond races up to the level of screen… but there’s no good reason for him to do so. Willie Cauley-Stein isn’t a threat to pop back out and shoot, and Kyle Kuzma fought over the screen to contest a possible pull-up 3-pointer by Doncic. By jumping out so far onto the perimeter, Drummond essentially took himself out of the play. Even if meeting Doncic on the perimeter made sense, he landed on the wrong side of the screen. That forced Davis to try to split the difference between contesting Doncic’s drive and covering Porzingis behind him. Even Davis can’t cover two players at once, though, and it leads to an easy dunk.

The Lakers mix up their pick-and-roll coverages frequently, and Drummond doesn’t necessarily need to be hand-cuffed to the basket, but mixups like this amount to free points, and if Drummond is going to try to play this way, the rest of the defense needs to be aware and to rotate accordingly. Defensive chemistry takes time to build.

Offensive chemistry between big men is very hard to find, and unsurprisingly, there was little interaction between Davis and Drummond on that end of the floor. Eventually, the Lakers may tinker with Davis as a ball-handler and using Drummond to screen for him in pick-and-roll, especially if they share bench minutes without LeBron James, but for now, many of the same problems that cropped up last year still persist.

The Lakers hardly ran any first-unit pick-and-roll for Davis with Drummond on the floor, and it’s not hard to see why. Just as JaVale McGee and Dwight Howard cramped the paint last season, Drummond, another non-shooter, is doing so now. The best version of the Laker offense is the one that spams the unguardable James-Davis pick-and-roll. They need three shooters out there to do it properly, which was the theory behind signing Gasol to start before the season. With Drummond on the floor, it becomes significantly harder.

The Lakers got by offensively last year largely because of their incredible transition game. The Lakers scored fast-break points in punches because they could use their center to rebound while Davis cherry-picked on the other end. He would frequently contest a shot on the perimeter and immediately sprint to the other end of the court. The mismatch that would follow him would either be unable to prevent him from scoring on a quick post-up, or they would foul him in desperation.

Drummond is the NBA‘s best rebounder, which should kickstart more of these possessions. It didn’t on Thursday, but James’ absence as a hit-ahead passer as well as Davis’ limited current athleticism are the real reasons why. Eventually, though, Drummond is going to have to generate transition opportunities if he’s going to remain a starter. The fit between the two Laker big men wasn’t ideal against the Mavericks. The Lakers have another month to sort it out before the postseason. A shortage of doctors and nurses has contributed to Japan’s slow vaccine rollout, professor says
19 seconds ago 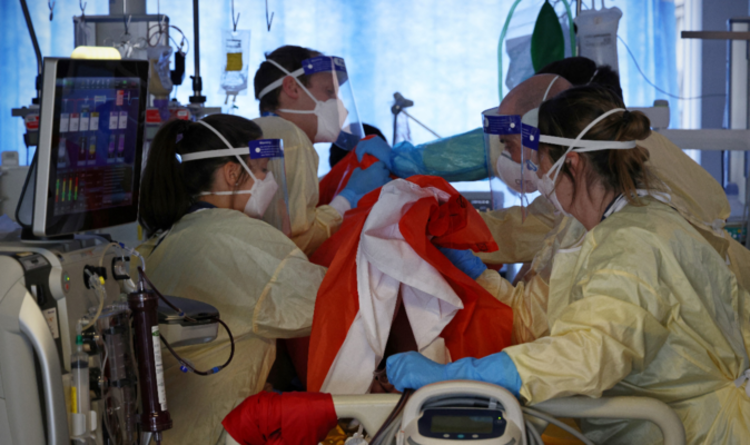 Long Covid: Data shows more than two million patients in England may have suffered
2 mins ago

Lawyers for Britney Spears’ father backed themselves into a corner, former prosecutor says
3 mins ago