Anthony Chiang @Anthony_Chiang
Bam Adebayo and Caleb Martin were nominees for the Eastern Conference Player of the Week award that just went to Giannis Antetokounmpo. – 3:34 PM

Danny Cunningham @RealDCunningham
Milwaukee’s Giannis Antetokounmpo was named the Eastern Conference Player of the Week.
#Cavs Donovan Mitchell was among the other nominees. – 3:32 PM

Scott Agness @ScottAgness
Myles Turner and rookie Bennedict Mathurin were nominees for Eastern Conference Player of the Week for last week — which was awarded to Bucks’ Giannis Antetokounmpo. – 3:32 PM 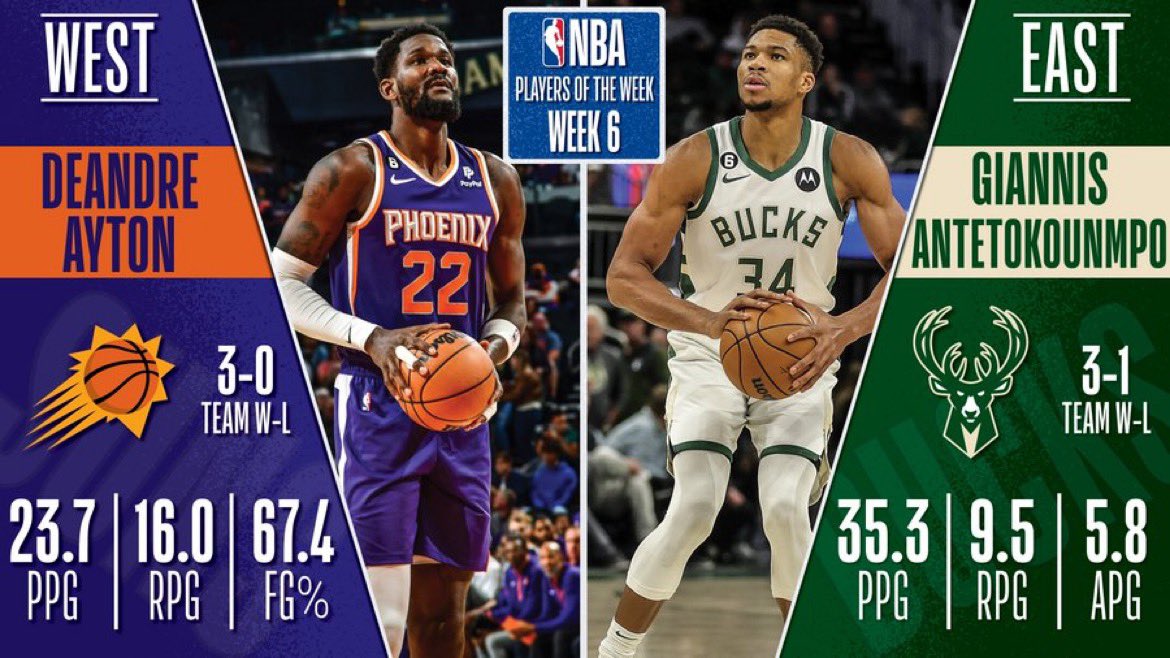 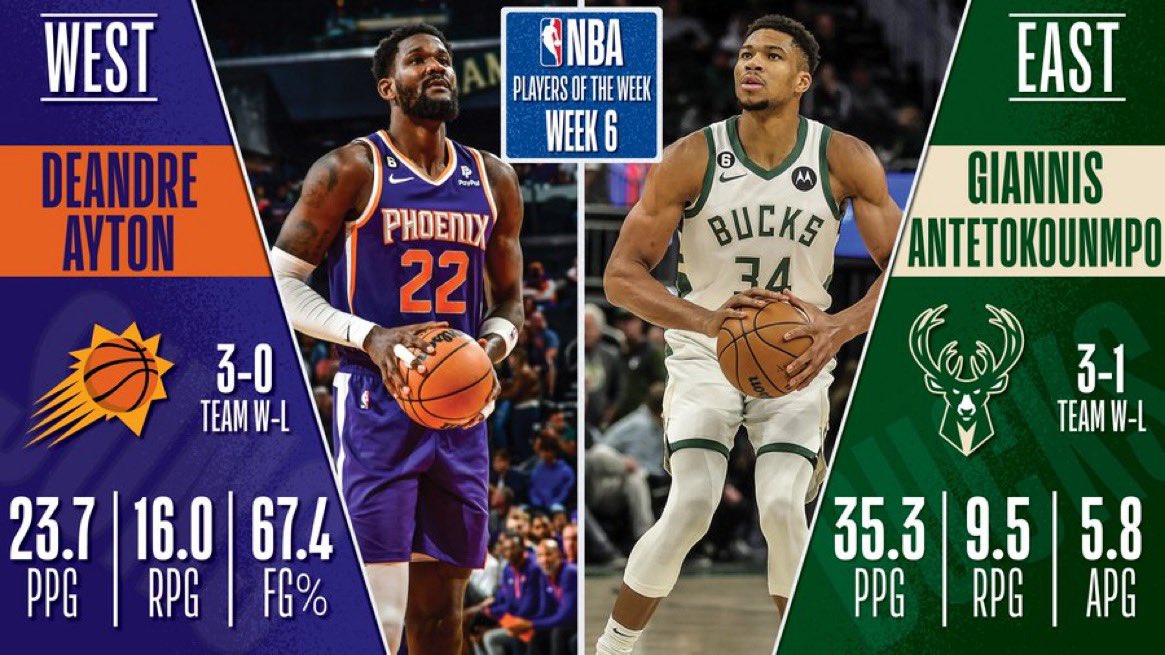 Marc Stein @TheSteinLine
Deandre Ayton and Giannis Antetokounmpo were just named West and East Player of the Week by the NBA.
More NBA from me: marcstein.Substack.com – 3:30 PM

Gerald Bourguet @GeraldBourguet
New words (and videos) on how Deandre Ayton is turning around his uneven start to the season with physicality, adjusting to new guard play, and thriving by attacking the O-boards: https://t.co/Cz8FmNvPF2 pic.twitter.com/MtTnri2BoN – 2:06 PM 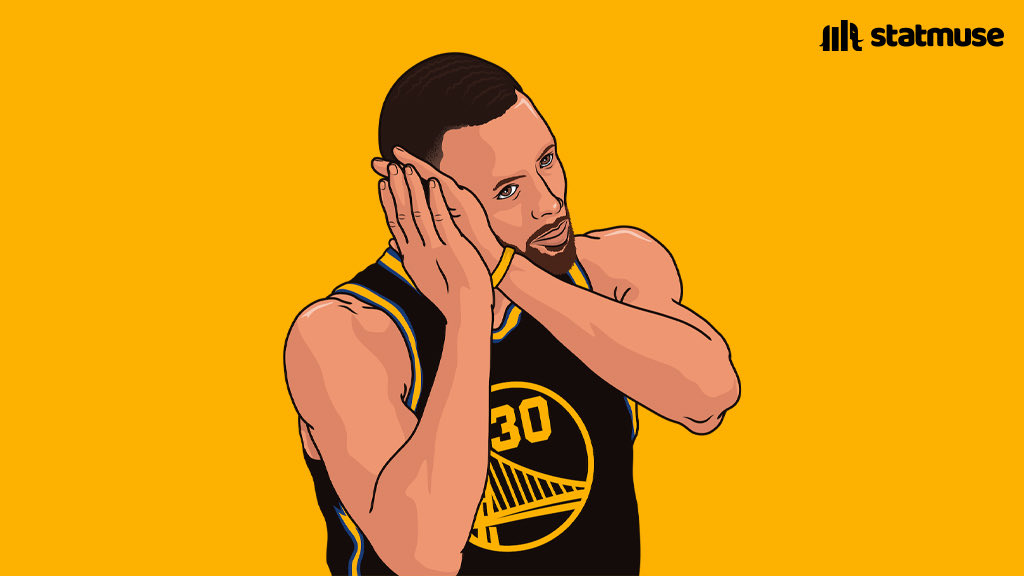 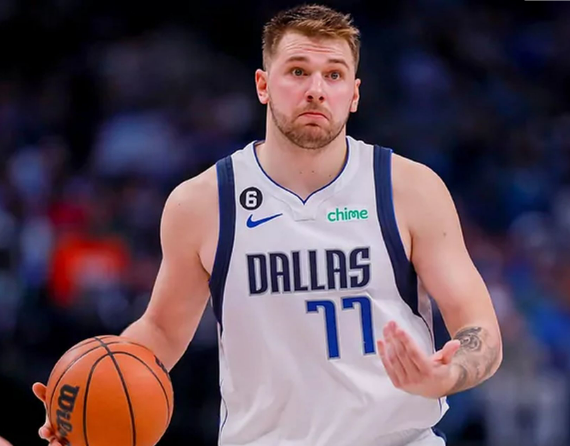 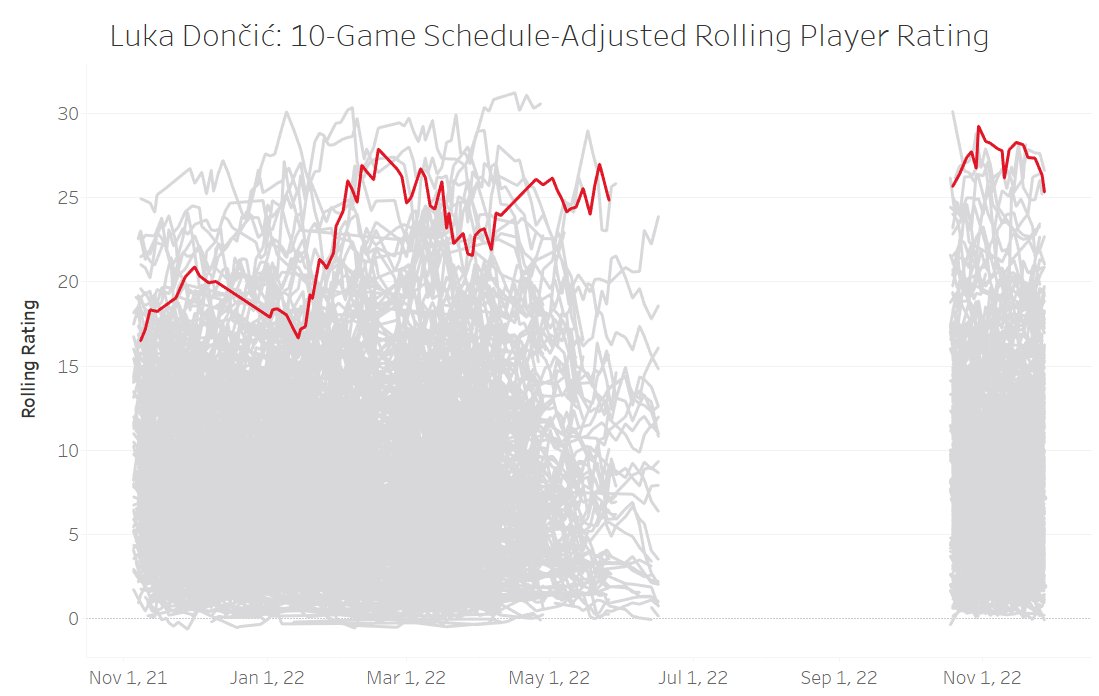 Gerald Bourguet @GeraldBourguet
Deandre Ayton didn’t get off to the hottest start this season, but something’s clicked over the last 5 games. For @PHNX_Suns, I wrote about how he’s been playing with force and whether he can sustain this new norm: https://t.co/Fq0dJoXrYh pic.twitter.com/GBSaXEEqFE – 9:02 AM 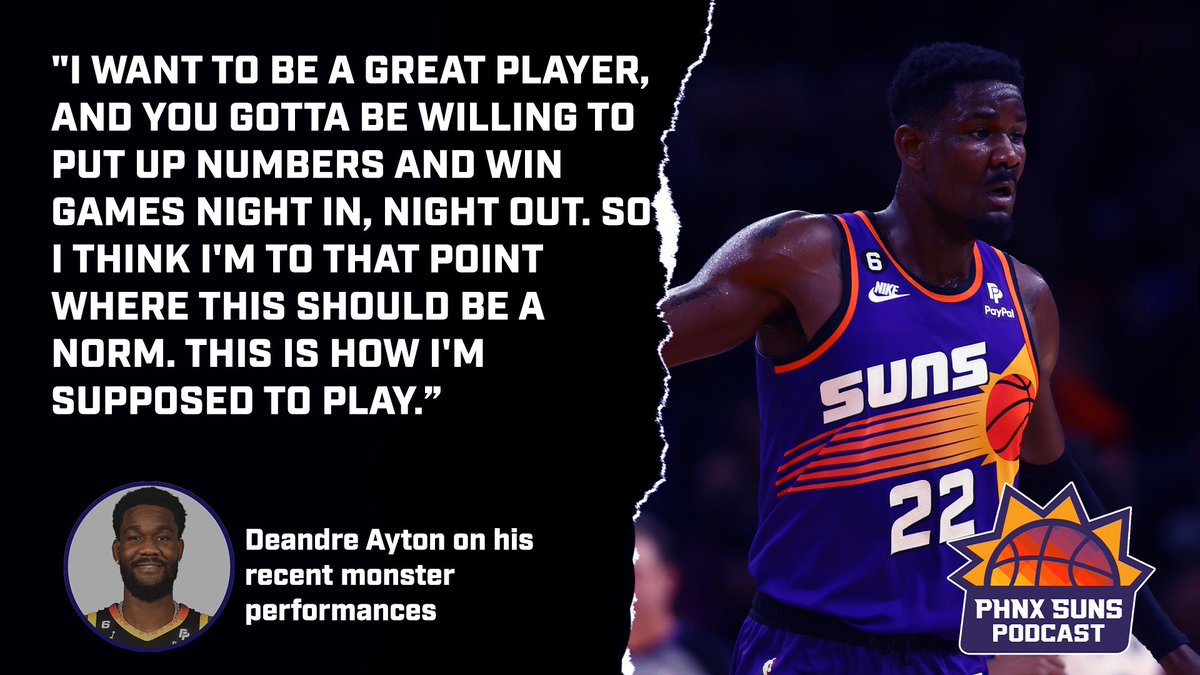 BasketNews @BasketNews_com
Everyone is a brother to Giannis Antetokounmpo in the Greece national team 🇬🇷🗣 pic.twitter.com/BduIo2A1Pk – 6:10 AM

Do you agree? pic.twitter.com/NXdnVrFFee – 4:41 AM 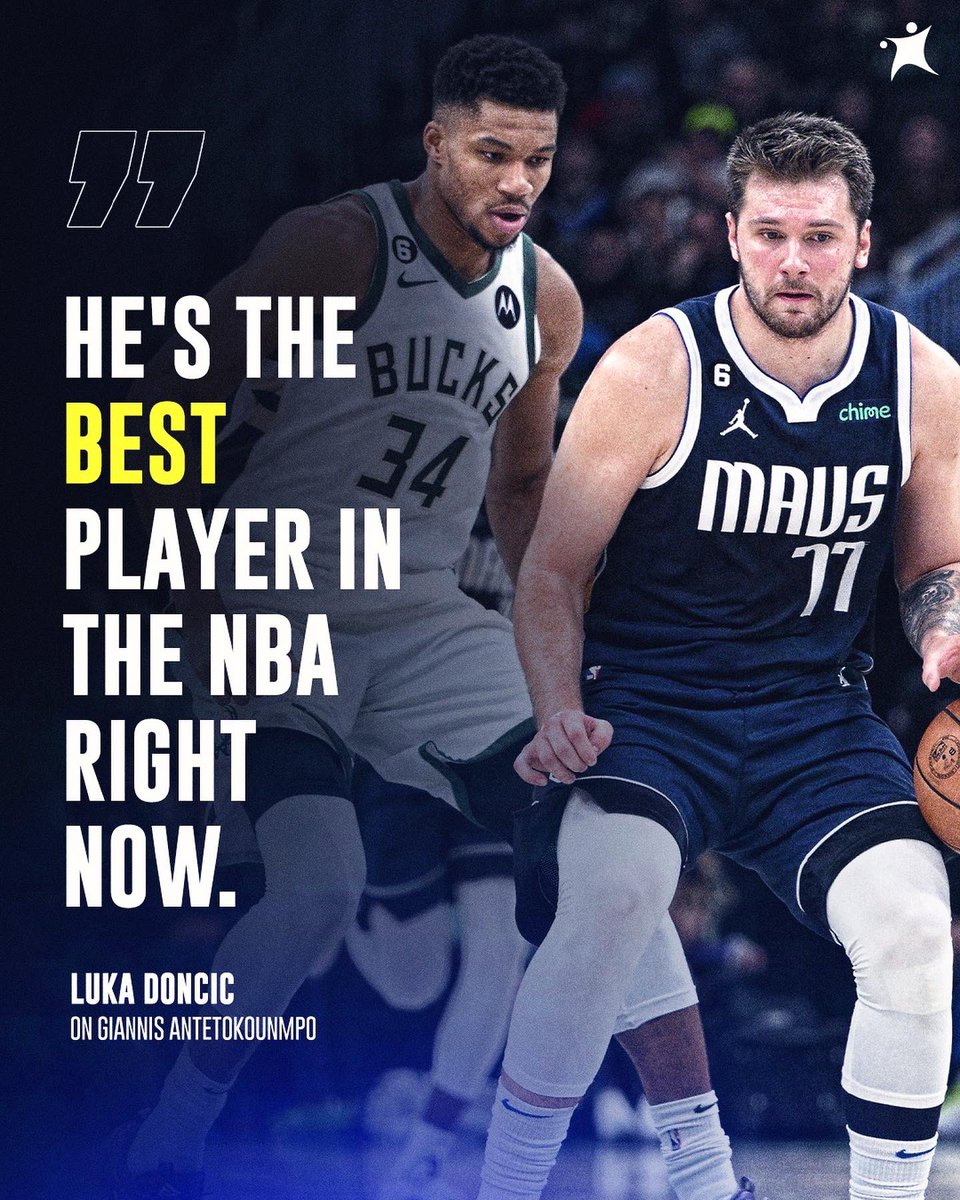 BasketNews @BasketNews_com
Not the first time Giannis Antetokounmpo was toying around with Raptors 😅🦖
🎥 @NBATV pic.twitter.com/x4E4kQXQkC – 2:23 AM

BasketNews @BasketNews_com
Not the first time Giannis was toying around with Raptors 😅🦖
🎥 @NBATV pic.twitter.com/V82PwHpnsz – 2:22 AM

Jim Owczarski @JimOwczarski
Grayson Allen: 🎰🎰+1
Jrue Holiday on Luka 🛑
Giannis Antetokounmpo 📈 at the free throw line in the #Bucks 124-115 win over #Mavericks jsonline.com/story/sports/n… via @journalsentinel – 12:49 AM

Giannis Antetokounmpo @Giannis_An34
34, Can you do something for me?! pic.twitter.com/UQf6UqtqXW – 12:49 AM 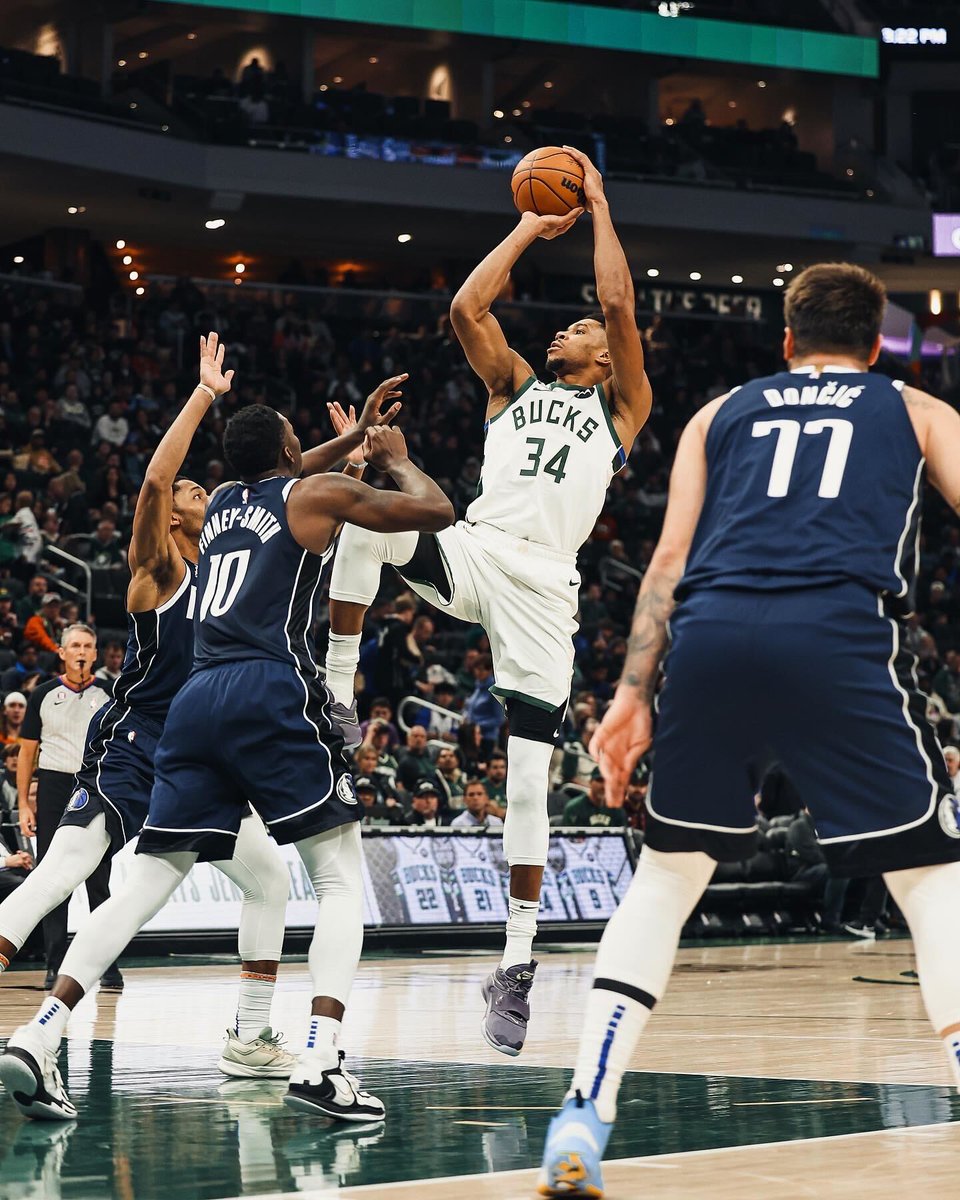 Eddie Sefko @ESefko
Giannis Antetokounmpo and Grayson Allen combined for 55 points and the Mavericks couldn’t keep pace with the Milwaukee Bucks. Here’s what the Mavs had to say about the 124-115 loss and the winless road trip.
mavs.com/bucks-beat-mav… – 11:37 PM

Jim Owczarski @JimOwczarski
Dallas still has its starters in, and Giannis Antetokounmpo picks up his fifth foul with 3:26 to go. #Bucks lead by 15. – 10:16 PM 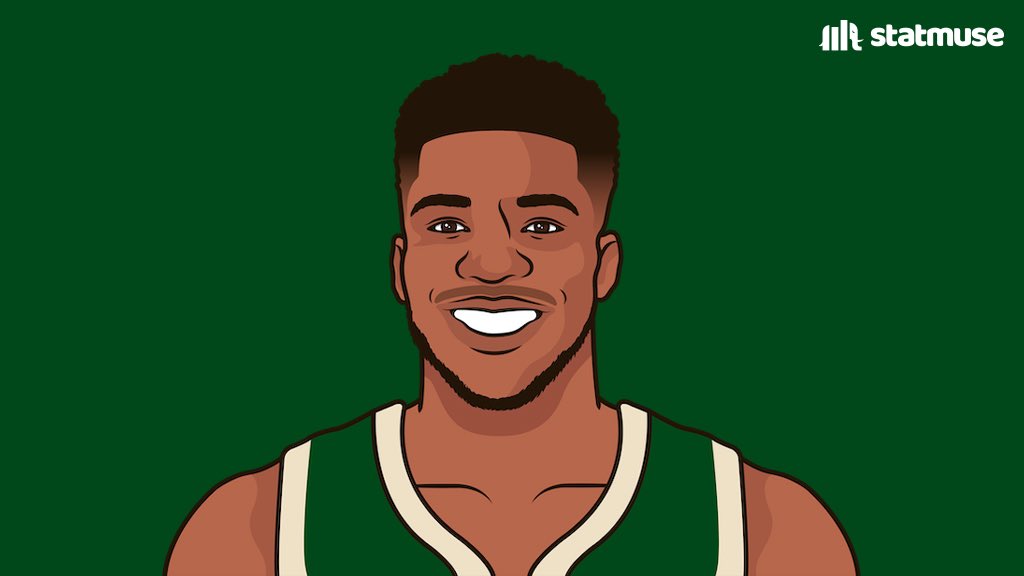 Eric Nehm @eric_nehm
I think that this has to be the smallest lineup I’ve seen the Bucks use this season.
Jrue Holiday, Jevon Carter, George Hill, Wesley Matthews and Giannis Antetokounmpo out there to close this game against Dallas.
Bucks up, 122-106, with 3:59 left. – 10:13 PM

Eric Nehm @eric_nehm
With 7:04 left, Brook Lopez just picked up his fifth foul.
Giannis Antetokounmpo was already waiting at the table though, so he just took Lopez’s spot. – 10:05 PM

Eric Nehm @eric_nehm
Quick timeout as we have some blood on Giannis Antetokounmpo after that foul.
Antetokounmpo to the line for two more. He already has 26pts/7reb/2ast and the Bucks lead, 98-92, with 2:15 left in the third quarter. – 9:42 PM

Eric Nehm @eric_nehm
The Mavericks just cut the Bucks lead down to one, 86-85, and the Bucks responded with a 7-0 run.
Jevon Carter for 3. Giannis Antetokounmpo with a massive dunk on a steal. And Bobby Portis with a tip-in. Hustle plays holding the Mavericks off for now. – 9:35 PM

Jim Owczarski @JimOwczarski
Dallas got to within 86-85, but another Jrue Holiday steal off Luka Dončić leads to a Giannis Antetokounmpo dunk and Bobby Portis sneaks in for an offensive putback and it’s 93-85 #Bucks – 9:35 PM

Eric Nehm @eric_nehm
Grayson Allen finally misses a 3 here in the third quarter on a tough one off the bounce. Airballed it.
Giannis Antetokounmpo has tallied a quick six points in the first four minutes of the third quarter, but the Mavericks won’t go away.
Bucks 81, Mavericks 77. 8:08 left in Q3. – 9:27 PM

Jim Owczarski @JimOwczarski
Giannis Antetokounmpo picks up his third foul with 10:44 to go in the third quarter — Grayson Allen missed the three. But, that didn’t count. – 9:21 PM

NBA on ESPN @ESPNNBA
Giannis right past Luka for the slam 😤 pic.twitter.com/HgFo06QJXT – 9:04 PM

Brad Townsend @townbrad
Our friend @Eddie Sefko timed how long it took Giannis to attempt those free-throws once he was given the ball.
First attempt: 16:53 seconds.
Second attempt: 15:38 seconds. – 9:03 PM

Michael Dugat @mdug
I’m sorry, but the amount of time they allow Giannis to shoot a FT is ridiculous – 9:03 PM

Eddie Sefko @ESefko
If you were wondering, it was 15.38 seconds on that second Giannis free throw from the time that he got the ball to the time he released it. – 9:02 PM

Duane Rankin @DuaneRankin
“I told him I need your energy. I knew when you get in this thing, you’re going to turn this up. I need that energy.”
Deandre Ayton’s message to Jock Landale as he sparked Phoenix #Suns win Saturday vs Utah #Jazz after not playing in three straight games. bit.ly/3OE7QNO – 8:44 PM

Eric Nehm @eric_nehm
Two tough calls in a row against Giannis Antetokounmpo. One on an offensive rebound and the second on a charge.
He now has two personal fouls with 4:40 left in the first quarter. – 8:29 PM

Eddie Sefko @ESefko
Consecutive tough calls on Giannis. A loose-ball whistle that was late and a charging call, drawn by Dorian Finney-Smith. Antetokounmpo sits with two fouls and 4:40 left in the first quarter. – 8:29 PM

Jim Owczarski @JimOwczarski
Giannis Antetokounmpo picks up two quick fouls in the last few seconds – 4:40 remain in the first quarter. Brook Lopez returns to the court, but he also has two fouls. – 8:29 PM

Frank Madden @fmaddenNBA
My only complaint about Jevon Carter since arriving is that he’s been comically bad at getting Giannis the ball in transition — that time he sees Giannis and gets it to him with a head of steam for the finish slicing past Luka. – 8:18 PM

Brad Townsend @townbrad
Early Bucks avalanche: 15-5 and Giannis only has two points. Doncic has yet to take a shot. – 8:16 PM

Eric Nehm @eric_nehm
It’s a 7:10 tip time here in Milwaukee tonight.
Giannis vs. Luka.
Bucks vs. Mavericks.
Might end up being the best game played by a professional sports team based in Wisconsin. – 7:55 PM

Sarah Todd @NBASarah
Here’s the play where Markkanen and Ayton hit knees. Markkanen was limping for a bit after this but stayed in the game. He’s listed as questionable (right knee contusion) for Monday’s Jazz game vs. Bulls pic.twitter.com/E4t14NYUU3 – 7:10 PM

Chuck Cooperstein @coopmavs
JKidd says in our pre game talk despite size of Giannis & Lopez, there was no consideration given to starting Wood vs Hardaway. On 1 hand they need his scoring off the bench. On the other, they just got outrebounded 48-34 inc 17 off rebs, & MIL +6.0 reb diff is best in @nba – 7:01 PM

Brad Townsend @townbrad
Will Mavs have. Stopwatch when Giannis is at the FT line?
“No,” Kidd says with a laugh. “They’ (refs) are not going to call 10 seconds. They don’t call traveling, so why would they call 10 seconds?” – 6:37 PM 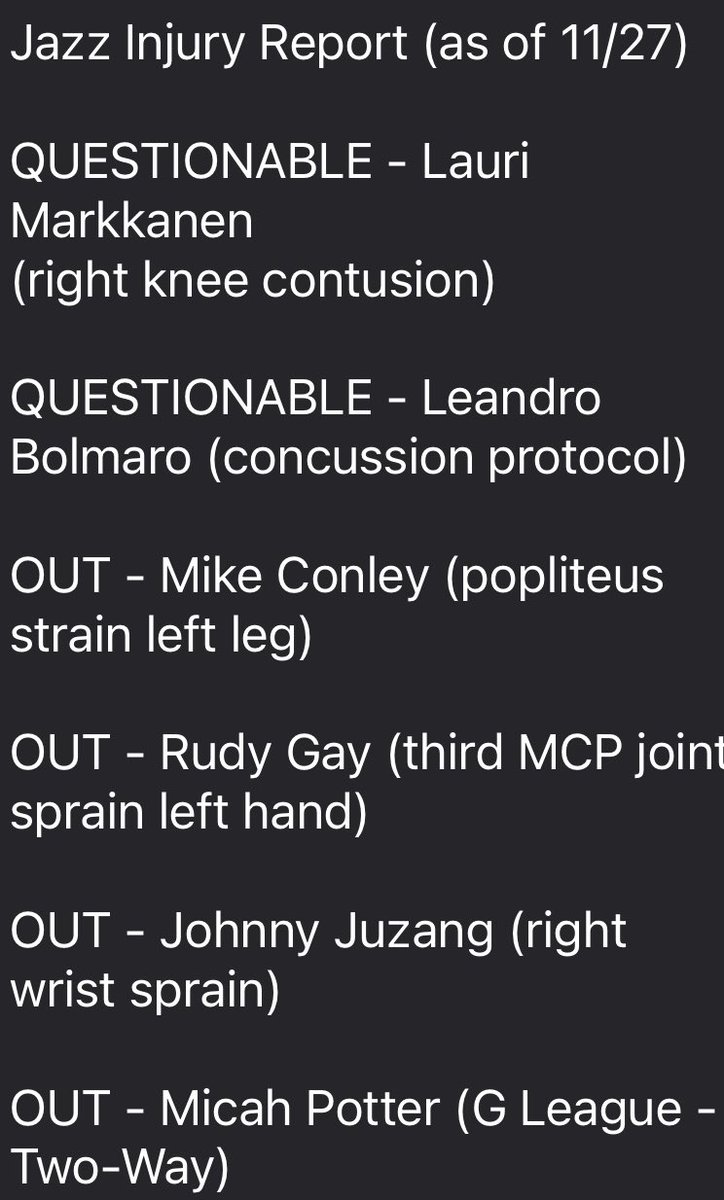 Tony Jones @Tjonesonthenba
Lauri Markkanen suffered a knee contusion last night against Phoenix when he collided with DeAndre Ayton in the second quarter. He is questionable for tomorrow night against the Chicago Bulls – 6:26 PM

Ryan Miller @millerjryan
Lauri Markkanen is questionable tomorrow with a right knee contusion.
He sustained the contusion when he hit knees with Deandre Ayton in the second quarter of last night’s game. – 6:26 PM

After the Milwaukee Bucks secured a 124-115 victory over the Dallas Mavericks on Sunday night, Mavs star Luka Doncic had some high praise for former two-time MVP Giannis Antetokounmpo, calling him the best player in the league. “It’s hard to go against a guy like that,” Doncic said. “He’s the best player in the NBA right now. He’s almost impossible to stop. It’s really fun to see him play, but it’s not that fun to go against him.” -via ESPN / November 28, 2022
Former back-to-back NBA MVP averaged 29.3 points, 8.8 rebounds, and 4.7 assists under Itoudis. But Giannis team was stopped by Germany in the quarterfinals 96-107. “You need to make certain adjustments in strategy, spacing, and how your opponents play and build the wall in Europe without a three-second violation. It’s more an adjustment for Giannis because he plays a lot from his instincts,” Itoudis explained his first coaching experience building a team around Antetokounmpo. -via BasketNews / November 27, 2022
“There’s a lot of development there to happen. He needs to evolve his game in the European scene, working with certain adjustments that other teams are doing because of the characteristics, skills, advantages, and disadvantages he might have in his game. He is open to discussing and discovering new ways to help the team and his teammates, which makes him very important to the team and chemistry,” he continued in an interview with BasketNews. “But regarding cooperation, I would say it was very smooth. Giannis wants to be coached. It starts with his humbleness. He has both his feet on the ground. He has a lot to grow as a player, and he knows that. The fact is that he likes the sport, and he’s a living example. In that term, it was easy,” the coach emphasized. -via BasketNews / November 27, 2022
Duane Rankin: Devin Booker says he doesn’t have a comment on Patrick Beverley’s three-game suspension, but did say he doesn’t like to see anyone “lose money.” Beverley was suspended three games w/o pay for shove of Deandre Ayton in #Suns win over Lakers. -via Twitter @DuaneRankin / November 25, 2022
Shams Charania: Patrick Beverley’s suspension is for shoving Suns‘ Deandre Ayton from behind, knocking him to the court, and was based in part on Beverley’s history of unsportsmanlike acts, NBA says. -via Twitter @ShamsCharania / November 24, 2022
Lakers guard Patrick Beverley was ejected for pushing Suns center Deandre Ayton to the floor late in Los Angeles’ 115-105 loss. However, the veteran guard said his actions were prompted by how Phoenix players were treating his teammate Austin Reaves. “Got a person on the ground, two people looking over mean-mugging and puffing their chest out and referees don’t get into it to kind of separate it, control the game, so I’m going to stand up for my teammate,” Beverley said. -via EuroHoops.net / November 23, 2022 All the players linked to the Knicks in trade rumors