Editor’s note: Is your power out? Click here for a lite version of this page with a quicker load time.

The “extremely dangerous” hurricane landed as a major Category 4 storm with maximum sustained winds near 150 miles per hour Wednesday afternoon. It slowed to a Category 3 hurricane with 125 mph winds around 7 p.m. ET, according to the center.

As of 7 p.m., the storm’s center was located 25 miles northeast of Punta Gorda, Florida — about 100 miles south-southwest of Orlando. The storm was moving north-northeast at 8 mph with maximum sustained winds at 125 mph, according to the hurricane center. Ian will continue to move slowly, slamming much of the state with life-threatening storm surge, catastrophic winds and flooding, the National Hurricane Center said.

“We are now forecasting a catastrophic storm surge of 12 to 16 feet from Englewood to Bonita Beach,” the hurricane center advisory warned.

When the storm made landfall with 150 mph winds, Ian was within 7 mph of Category 5, the highest status on the Saffir-Simpson Hurricane Scale of Hurricane Intensity.

• Hurricane tracker: Where is Ian headed? See the map.

1 million without power in Florida. Restoring it could take days, weeks

More than 1.1 million Floridians were without power as of 6 p.m. ET, DeSantis said in a Wednesday evening press conference. “That number is going to grow,” DeSantis said. “You’re going to get more power outages.”

The massive hurricane could force Florida Power & Light (FPL) to do a “complete rebuild” in some parts of Florida’s west coast, which could take days or weeks, the utility company told CNN.

“What we’re seeing already just from some of the early visuals, we expect that there are going to be parts of our system on the West Coast, which will need to be rebuilt and that is going to take longer — could be a number of days, could be a matter of weeks, depending on the nature of the damages,” said Dave Reuter, chief communications officer for Florida Power & Light.

More customers, he said, will be losing power as the path of the storm crosses central Florida.

Hurricane Ian is following an eerily similar path to the strongest recorded hurricane to hit Southwest Florida — and it is nearly three times its size.

Hurricane Charley ravaged Southwest Florida in August 2004, and 31 people died in relation to the hurricane, the CDC said.

But despite its damage, Charley was a relatively small hurricane: it was fairly contained to a limited area in its swath across Florida. The worst storm surge was around seven feet in a small area of the state’s west coast.

Hurricane Ian is much larger. As of Wednesday morning, its area of hurricane-force winds was nearly three times larger than Charley’s, up to 45 miles from the center, and its area of tropical-storm-force winds extended outward up to 175 miles.

“This is way, way, way bigger than Charlie,” DeSantis said during a press conference Wednesday.

An extreme wind warning was in effect was in effect for portions of southwest Florida for extremely dangerous hurricane winds as Ian came ashore. “Treat these imminent extreme winds as if a tornado was approaching and move immediately to an interior room or shelter NOW!,” the National Weather Service warned.

National Weather Service Director Ken Graham said the storm was moving at 9 mph and was slowing down. It will take 24 hours or more to cross the state, he said – “24 hours of rainfall, 24 hours of wind pushing the water.”

Some areas will see 24 inches of rain, some will see storm surge of 18 feet, he said.

“This is a devastating storm for parts of Florida, not just on the southwest coast but inland,” he said. “This is going to be a storm we will talk about for many years to come. It’s a historic event.”

Ian was expected to weaken after landfall, the hurricane center said, but the storm could remain near hurricane strength when it moves over Florida’s east coast Thursday. And could still hold its power as it approaches the northeastern Florida, Georgia and South Carolina coasts late Friday.

Heavy rainfall will spread across the Florida peninsula through Thursday.

Georgia Gov. Brian Kemp issued a state of emergency order for the entire state and said up to 500 National Guard troops were preparing to be called up if needed.

Federal Emergency Management Agency Director Deanne Criswell says her biggest concern is the expected storm surge and inland flooding from heavy rains as the storm crawls across Florida over the next two days. She urged residents across the state to heed the warnings of local officials for the “historic and catastrophic impacts that we are already beginning to see.”

“Water is dangerous, period,” Criswell said at a briefing Wednesday. “From coastal storm surge to inland flooding, the majority of the state of Florida is in Ian’s crosshairs.”

PREPARE YOUR POOL FOR A HURRICANE: Pool owners guide

Even Waffle Houses are shutting down

The Waffle House chain, known for its waffles, smothered hash browns and always-open doors, said it had closed 21 restaurants in Florida due to Ian.  The Waffle House Storm Center, a team that mobilizes during extreme weather, has been monitoring the storm’s path since Ian was a named storm, said Waffle House Vice President of Public Relations Njeri Boss. The chain was working with local governments and emergency responders around the clock to see if other outlets must close, he said.

“We do have closures in mandatory evacuation zones and areas within low-lying areas that are subject to severe flooding,” Boss told USA TODAY Wednesday.

Social media took notice. Twitter user Ted Vician posted that “everything else is foreshadowing. Closed Waffle House means stuff is about to get real.”

Too late to flee for some

DeSantis warned the highest risk was along the west coast counties of Collier, Lee,  Charlotte and Sarasota. Landfall is forecast for Charlotte County.

“If you are in any of those counties, it’s no longer possible to safely evacuate,” DeSantis said. “It’s time to hunker down and prepare for this storm.”

WHAT IS STORM SURGE?:Explaining a hurricane’s deadliest and most destructive threat

Tornadoes also were a risk. Twisters were possible through Wednesday night across central and south Florida, the hurricane center said. CBS4-TV reported that least 10 mobile homes were damaged by a possible tornado Tuesday in Davie, a Broward County city of 110,000 people 25 miles north of Miami. Another possible tornado also was reported in Broward County.

The Storm Prediction Center said Wednesday that “the risk of a few tornadoes should gradually increase across parts of central and east-central Florida this afternoon, with a potential focus from Lake Okeechobee northward to near Orlando during the next few hours.”

WHAT IS THE SAFFIR-SIMPSON HURRICANE WIND SPEED SCALE?Breaking down the hurricane category scale

Ian puts Cuba in the dark

Cuba remained in the dark early Wednesday after Hurricane Ian knocked out its power grid and devastated homes, businesses and valuable tobacco farms when it hit the island’s western tip Tuesday as a Category 3 storm. Authorities were working to gradually restore service to the country’s 11 million people, Cuba’s Electric Union said in a statement.

“The damage is great, although it has not yet been possible to account for it. Aid is already pouring in from all over the country,” Cuban President Miguel Mario Díaz-Canel Bermúdez said on Twitter. “Rest assured that we will recover.”

Airports in Tampa, St. Petersburg and Key West were closed Wednesday. Orlando International was scheduled to shut down at 10:30 a.m., and at least 700 flights in and out were canceled by early Wednesday.

Miami-Dade County suspended Metrobus, Metrorail and other transit services “until further notice.”  Disney World theme parks and Sea World in Orlando all closed ahead of the storm.

A couple from England on vacation in Tampa found themselves faced with riding out the storm at a shelter. Glyn and Christine Williams of London were told to leave their hotel near the beach when evacuations were ordered. Because the airport shut down, they could get no flight home.

“Unfortunately, all the hotels are full or closed, so it looks as though we’re going to be in one of the shelters,” Christine Williams said.

“Do not, let me repeat, do not use this as an excuse to raise gasoline prices or gouge the American people,” Biden said at the start of a conference on hunger in America.

Biden said that the hurricane “provides no excuse for price increases at the pump” and if it happens, he will ask federal officials to determine ”whether price gauging is going on.” 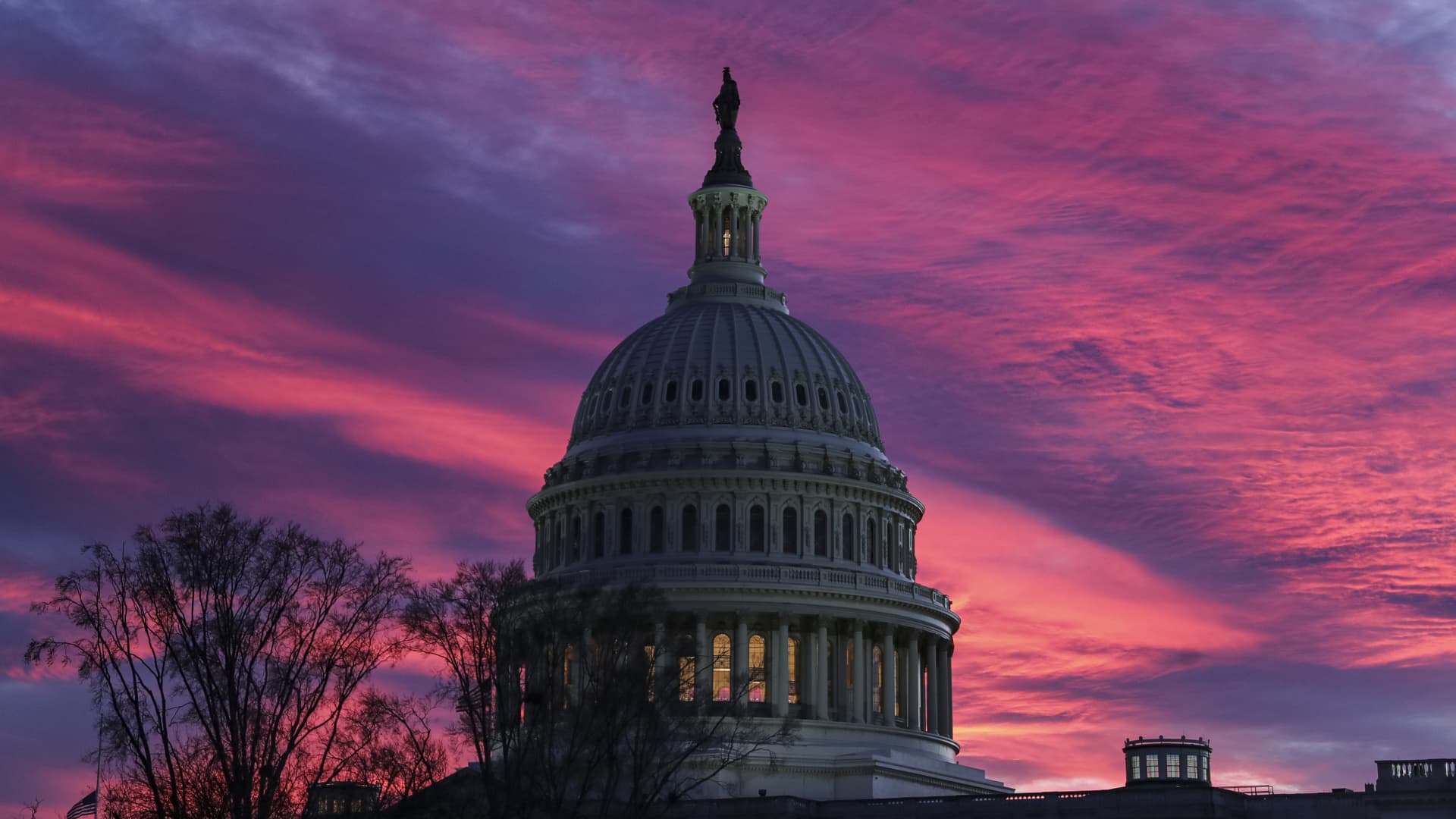