To hear more audio stories from publications like The New York Times, download Audm for iPhone or Android.

Tens of millions of Americans face an onslaught of litigation and legislative revision after a sweeping Supreme Court decision making it easier to carry a firearm in public upended gun control laws in at least a half-dozen states.

The decision by the court on Thursday — its first major ruling on the right of Americans to carry a gun in public — most narrowly involves a New York State law that allows authorities to set additional requirements before residents can get a concealed-carry gun permit.

But five other states — California, Hawaii, Maryland, Massachusetts and New Jersey — have similar laws that legislators will now have to rewrite to comply with the Supreme Court ruling, or risk facing legal challenges that their current laws are unconstitutional. Three additional states — Connecticut, Delaware and Rhode Island — may need to rewrite laws that set certain limits on how permits for carrying guns outside the home are issued, gun rights groups said.

The Supreme Court ruling does not immediately nullify or revise these state laws; it just makes clear that they are unconstitutional, effectively forcing state officials to revamp them.

“These states have to come into compliance, or we will force them to,” said Stephen D. Stamboulieh, a lawyer for Gun Owners of America.

Officials in the affected states immediately condemned the ruling, saying it would lead to more gun violence.

“This is a dangerous decision from a court hell bent on pushing a radical ideological agenda and infringing on the rights of states to protect our citizens from being gunned down in our streets, schools, and churches,” Gov. Gavin Newsom of California said in a tweet, calling the ruling “shameful.”

Brian Frosh, Maryland’s attorney general, said in a statement that the justices’ decision would mean “more deaths and more pain in a country already awash in gun violence.”

Further legal sparring is all but guaranteed, as officials in some of the affected states announced plans to try to craft new laws that attempt to honor the Supreme Court decision, while still placing limits on gun permits.

Options include mandating a significant amount of required training before a permit is granted or imposing bans on carrying guns in certain frequented places, such as public transit systems, schools, polling places or parks, constitutional and Second Amendment lawyers said on Thursday. The changes would almost certainly generate new lawsuits.

On Thursday, Mr. Newsom said California lawmakers “anticipated this moment” and would hear a bill next week to shore up the state’s “public carry” law, rewriting it to regulate gun use in ways that blunt the ruling’s impact. He added that he was preparing to sign 16 gun safety bills this session, including one to allow individuals to sue gun makers and distributors for trafficking in outlawed firearms.

“California has proven that common-sense gun laws save lives,” Mr. Newsom said, “and we will continue to stand up to those in political power who enable and coddle the gun industry.”

Other states said they would consider similar moves.

Gov. Kathy Hochul of New York said she would call a special legislative session as soon as July and outlined proposals that could let the state maintain some of the nation’s most restrictive gun laws.

Gov. Philip D. Murphy of New Jersey said his administration was reviewing the court’s language and that it had been going over options that “we believe are still available to us regarding who can carry concealed weapons and where they can carry them.”

In Maryland, Bill Ferguson, who leads the State Senate, and Adrienne Jones, who leads the House of Delegates, wrote in a joint statement that they would review the opinion and, if necessary, pass legislation that “protects Marylanders and complies with this brand-new precedent.”

Attorney General Maura Healey of Massachusetts said she and 19 other attorneys general argued to the Supreme Court last year that the Second Amendment does not bar states and localities from regulating the carrying of guns in public, “as they have done for hundreds of years.”

“The default right now is that you can bring a lawfully carried firearm into private property unless you are explicitly told not to,” said Eric Ruben, assistant professor of law at the S.M.U. Dedman School of Law. “States might consider whether this default should be flipped in a world where more Americans are carrying concealed guns.”

Exactly how much harder or easier it will become to get a concealed-carry permit in these states will be determined only by the legislative responses, said Darrell Miller, a law professor at Duke University and a co-director of the Duke Center for Firearms Law.

“What is clear is that these states will have to change their laws in a way where the licensing authority has less discretion to deny a permit,” Mr. Miller said.

The ruling will generate challenges to much more than concealed-carry permit laws because it explicitly rejects a legal standard — nicknamed the “two-step test” — that federal courts have used to evaluate Second Amendment challenges since a major Supreme Court ruling on gun rights in 2008.

Instead, the court has now ruled that a “history and tradition” standard should be used to evaluate these questions. This standard will require courts to evaluate if a contemporary gun law is in some way analogous to regulations that existed around the time when the Second Amendment was adopted in the late 18th century.

“We are going to see a lot of litigation,” said Adam Winkler, a University of California, Los Angeles, professor who specializes in gun policy. “This sets a new test for Second Amendment cases that calls into question most of the key elements of the gun safety agenda over the last decade.”

The result, according to lawyers on both sides of the gun debate, is that pending cases or even past rulings related to issues such as bans on certain assault rifles or high-capacity magazines on handguns or rifles could have different outcomes that are more friendly to gun rights.

Mr. Stamboulieh, the lawyer for Gun Owners of America, was already moving on Thursday to ensure that federal courts where he has pending cases take the Supreme Court ruling into consideration, including in a Hawaii case challenging a law that prohibits the carrying of handguns outside of the home.

“This is a lot broader than I thought the court was going to go,” he said. “There is so much work now to do. ”

The United States already had been moving in the direction of easing concealed-carry requirements. In the past decade, 22 states have passed legislation repealing permit requirements entirely, meaning a total of 25 states do not require a permit to carry a concealed weapon.

“This case reflects broad-based cultural changes already underway in most other states with regard to the lawful carrying of guns in public,” said Jennifer Carlson, an associate professor of sociology and government and public policy at the University of Arizona. “The case is codifying cultural change that has already occurred in a majority of states — and imposing that change on states that haven’t followed that trend.”

California allows gun owners to carry concealed weapons, but the authorization of permits is left to the discretion of local law enforcement, and varies widely. In rural counties or jurisdictions with Republican police chiefs or sheriffs — Sacramento, for example — permits to carry guns outside the home typically require little more than a gun safety class, a clean criminal record and a fee.

In more populated parts of the state, however, gun owners hoping to carry a concealed firearm can face steep hurdles.

​​Applicants in San Francisco must supply “convincing evidence” that they or their families currently face “significant risk of danger to life or of great bodily injury,” and that law enforcement or reasonable avoidance cannot adequately address the problem. They also must undergo 16 hours of firearms training, pass a background check and psychological examination, and have no history indicating a propensity toward violence or carelessness with firearms. Even then, the sheriff’s decision is “discretionary and final,” the local guidelines say.

California’s gun laws are among the nation’s strictest, and researchers credit them in large measure for a rate of gun deaths that is nearly 40 percent lower than in the rest of the nation. On Thursday, state lawmakers and the attorney general, Rob Bonta, said they have been tailoring legislation for some time with the New York case in mind.

Mr. Bonta acknowledged that the ruling would outlaw the state’s requirement that Californians show “good cause” for carrying a gun in public, but he said other requirements appeared to remain constitutional, including background checks and firearms safety training. “States,” he said, “still have the right to limit concealed-carry permits to those who may safely possess firearms.”

In New York City, Mayor Eric Adams said the decision could lead New Yorkers to fear that anyone around them could be carrying a gun.

“We cannot allow New York to become the wild, wild west,” said Mr. Adams, a Democrat who has emphasized reducing crime in the city. “That is unacceptable.”

But the ruling was celebrated elsewhere.

In Hawaii, George Young, a Vietnam veteran who has challenged the state’s law that requires residents to identify specific reasons they should be allowed to carry a handgun outside of their home, was “ecstatic” to learn of the Supreme Court ruling, said his lawyer, Alan Alexander Beck. 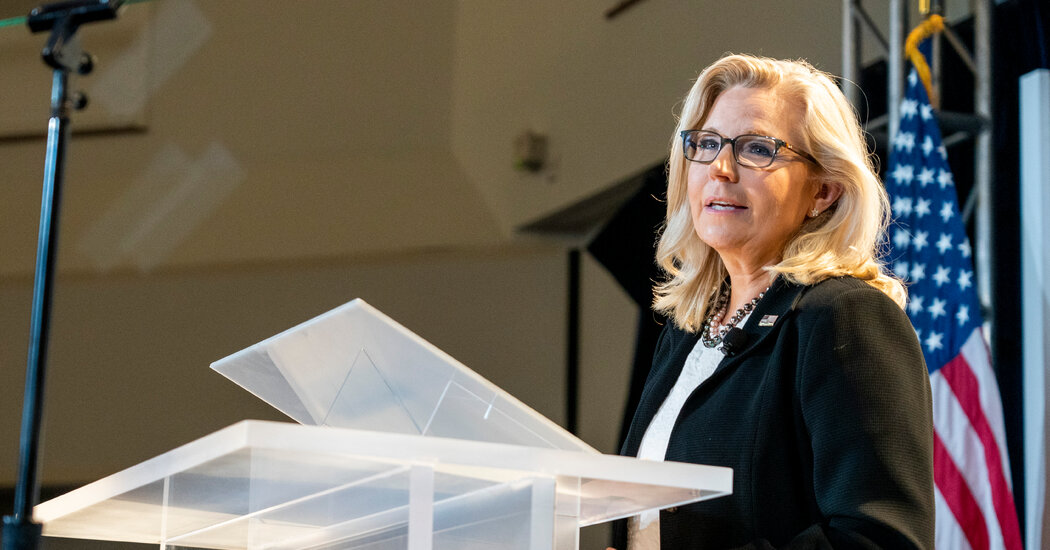 Liz Cheney Braces for Wyoming’s Verdict, but History Will Have to Wait