A contingent of Ukrainian fighters who doggedly defended a steel mill in Mariupol for weeks have “fulfilled its combat mission,” Ukrainian officials said, and efforts were underway to evacuate the last of the group.

“The Supreme Military Command ordered the commanders of the units stationed at Azovstal to save the lives of their personnel,” the General Staff of the Armed Forces of Ukraine said in a statement. “Mariupol defenders are heroes of our time.”

More than 260 Ukrainian troops were evacuated to areas controlled by Russian-backed separatists. The Kremlin called the exodus a mass surrender. Russian Defense Ministry video shows troops patting down and searching the fighters. Some were on stretchers as they were loaded onto the buses.

Ukraine Minister for the Reintegration Irina Vereshchuk said a prisoner exchange will take place for the more than 50 wounded soldiers when their condition stabilizes. More than 200 other fighters were evacuated through a humanitarian corridor, she said. Hundreds of prisoners from both sides have been exchanged since the war began Feb. 24.

An unknown number of troops remained at the Azovstal steel plant that sprawls across 4 square miles. The plant has symbolized Ukraine’s final holdout in the besieged city.

“The work to bring the guys home continues, and it requires delicacy and time,” Ukrainian President Volodymyr Zelenskyy said.

USA TODAY ON TELEGRAM:Join our Russia-Ukraine war channel to receive the latest updates straight to your inbox

►The Vatican’s foreign minister, Archbishop Paul Gallagher, arrives in Kyiv on Wednesday for a meeting Friday with Ukrainian Foreign Minister Dmytro Kuleba. The Vatican is trying to salvage newly improved ties with the Russian Orthodox Church while offering support to the “martyred” Ukrainian faithful.

►After over 200 years as a nonaligned nation, Sweden will join neighboring Finland in applying for membership in NATO. Russian President Vladimir Putin said the move would make little difference since both countries have been aligned with NATO – but warned that “the expansion of military infrastructure onto this territory will of course give rise to our reaction in response.”

The chief prosecutor for the International Criminal Court said Tuesday he has deployed a team of 42 investigators, forensic experts and support personnel to Ukraine. Prosecutor Karim Khan said the team, working with the Ukrainian authorities, will connect crime scene investigations and strengthen “hard evidence.”

To be classed as crimes against humanity, attacks have to be part of what the ICC’s founding treaty calls “a widespread or systematic attack directed against any civilian population.” Thousands of Ukrainian civilians are believed to have died since the Russian invasion began less than three mont

“It is essential that we demonstrate to survivors and the families of victims that international law is relevant,” Khan said in a statement, pledging to ” bring them some measure of solace through the process of justice.”

$40B funding for Ukraine nears approval

Congress is poised to approve more than $40 billion in emergency funding to support Ukraine, an amount nearly three times greater than what the U.S. has already committed in military, humanitarian and other assistance to beat back Russia’s invasion.

Along with the $13.6 billion passed in March, the combined $53.7 billion is about 81% of Russia’s 2021 defense budget. And more than one-quarter the size of Ukraine’s pre-war economy. The funding does not include the cost of reconstruction, which has been estimated at $600 billion.  Paul Stephan, a University of Virginia law school professor who has worked at the State and Defense departments, was wary of proposals to use frozen Russian assets for rebuilding Ukraine.

“Russia will not always be a pariah,” Stephan wrote in a recent analysis for Lawfare. “When it returns to the fold, it will want its money back.”

Biden to meet with leaders of Sweden and Finland

President Joe Biden will meet at the White House with the leaders of Sweden and Finland on Thursday to discuss those nations’ application for membership in NATO, the White House announced Tuesday. The meeting with Prime Minister Magdalena Andersson of Sweden and President Sauli Niinistö of Finland comes days after both countries announced they would seek entry into the alliance. Their applications must be approved by all current members, however, and Turkish President Recep Tayyip Erdogan has raised objections.

Still, White House press secretary Karine Jean-Pierre on Tuesday reiterated Secretary of State Antony Blinken’s comments Sunday that there is strong support within NATO for Sweden and Finland to join and there are ongoing conversations with Turkey.

“We have every confidence that there will be a consensus,” Jean-Pierre said.

Retired colonel on Russian TV: War is going badly and will ‘frankly, get worse’

A retired Russian colonel broke from the Kremlin narrative of the war in Ukraine this week, warning on Russian TV that as the West ramps up its arms deliveries “a million armed Ukrainian soldiers needs to be viewed as a reality of the very near future.” Thus the Russian’s military struggles are likely to “frankly, get worse,” Mikhail Khodaryonok said.

Khodaryonok said Russia faced “full geopolitical isolation.” The Russian TV host, Olga Skabeyeva, known as the “Iron doll of Putin TV” for her fiercely pro-Kremlin takes, suggested that the isolation was only from the West. But Khodaryonok said support from China and India was not as unconditional as the support Ukraine was receiving from the U.S. and its allies.

“Virtually the entire world is against us,” he said, as translated by the BBC’s Francis Scarr. “And it’s that situation that we need to get out of.”

“A desire to protect one’s homeland, in the sense that it exists in Ukraine, it really does exist there,” he said. “They intend to fight until the last man.”

Hundreds of Ukraine fighters who held on for weeks at the Azovstal steel plant were able to keep Russia from shifting up to 20,000 personnel to other locations in Ukraine, the Ukrainian  military said in a statement. That gave the military “the opportunity to prepare and create the defensive frontiers on which our troops are still present today,” the statement said.

“We got the critically needed time to build reserves, regroup forces, and get help from partners,” the statement said.

The most important joint task of all Ukraine and the whole world is to save the lives of Mariupol defenders, the statement added: “We will fight for you on all fronts as devotedly as you defend the country.” 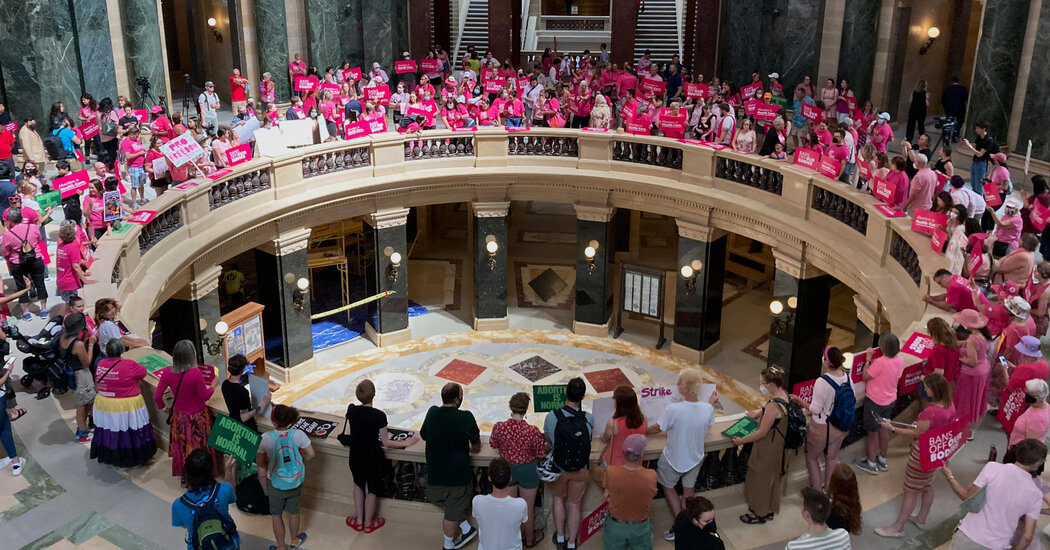 Century-Old State Laws Could Determine Where Abortion Is Legal