For two hours, Cassidy Hutchinson, a former White House aide, laid out a devastating account on Tuesday of former President Donald J. Trump’s actions and state of mind on Jan. 6, 2021, and in the days leading up to it.

Her testimony to the House select committee and a national television audience raised a series of questions that are sure to be the focus of continued inquiry by the committee, federal prosecutors and others seeking to flesh out Mr. Trump’s effort to reverse his election loss and remain in power.

Here are some of the key issues presented by her testimony.

What does this mean for a possible criminal prosecution?

Ms. Hutchinson told the panel that moments before Mr. Trump went onstage to deliver his speech on the Ellipse on the morning of Jan. 6, he was informed that people in the crowd were armed with a variety of weapons.

By her account, he responded by urging that security measures be taken down to allow his supporters to fill in the area around the stage. And she testified that Mr. Trump said he was in no danger because the crowd was supportive of him and that the people there could go on to march to the Capitol.

Legal experts said the testimony provided more evidence to support a possible criminal prosecution, as it suggested that Mr. Trump was aware of the potential for violence but went on to urge his supporters to head to the Capitol. During the speech, Mr. Trump encouraged the crowd to “fight like hell” and march to where Congress was certifying the Electoral College results — even promising that he would join them.

The Justice Department has said nothing explicit about any investigative focus on Mr. Trump. But lawyers have pointed to a number of potential charges against him, including obstructing Congress, conspiracy and incitement.

For months, the Justice Department has been documenting in court papers how rioters charged in the attack have claimed they were following Mr. Trump’s orders when they descended on and breached the Capitol. Ms. Hutchinson’s testimony could place Mr. Trump into a conspiratorial relationship with members of the mob, lawyers said, suggesting that he pushed them into action even though he was aware that they presented an immediate threat.

How the Justice Department will proceed is perhaps the biggest question of all.

What happened in the presidential vehicle?

No piece of Ms. Hutchinson’s testimony electrified the hearing room like her detailed description of a story she said she was told about Mr. Trump demanding to be taken to the Capitol in his armored vehicle when his speech at the Ellipse ended.

Ms. Hutchinson recalled being told by Anthony Ornato, a deputy White House chief of staff, that after Mr. Trump’s security detail told him he could not go to the Capitol, the president “lunged” for the steering wheel and then struck or grabbed his lead agent, Robert Engel. Mr. Trump was not in the armored limousine known as “the Beast,” as Ms. Hutchinson implied, but in an S.U.V. that presidents sometimes ride in.

Secret Service officials, speaking on the condition of anonymity, said that both Mr. Engel and Mr. Ornato would dispute that Mr. Trump tried to grab the wheel of the car or that Mr. Engel was struck. They said the two men would not dispute that Mr. Trump wanted to be driven to the Capitol as the angry pro-Trump protesters, some of them armed, headed in that direction and Congress was gathered to ratify that he had lost the election and that Joseph R. Biden Jr. would be the next president.

Ms. Hutchinson made clear in her public testimony that she did not have direct knowledge of the incident, and it remains unclear what, if anything, the committee did to corroborate it. Still, Mr. Trump’s allies are now pointing to it as a misstep by the committee and using it to undermine the credibility of her testimony.

For months, the committee has suggested that Mr. Trump or those close to him might have attempted to influence potential witnesses. Its members have suggested, for instance, that Mr. Trump may have influenced the refusal of Representative Kevin McCarthy, the House Republican leader, to cooperate with the investigation.

On Tuesday, Representative Liz Cheney, Republican of Wyoming and the vice chairwoman, displayed what she said were two examples of unnamed people associated with Mr. Trump attempting to influence witnesses. One witness was told to “protect” certain individuals to “stay in good graces in Trump World.” In the other example, a witness was encouraged to remain “loyal.”

“Most people know that attempting to influence witnesses to testify untruthfully presents very serious concerns,” Ms. Cheney said. “We will be discussing these issues as a committee and carefully considering our next steps.”

It is not clear whether the committee referred the incidents to the Justice Department for investigation or possible prosecution. According to Punchbowl News, Ms. Hutchinson was one of the people who received such a warning. Her lawyer did not respond to a message seeking comment.

Mr. Trump and his advisers have come under scrutiny in previous situations for reportedly trying to influence witnesses. In 2017, a lawyer for Mr. Trump in the investigation into whether his campaign conspired with Russian officials in 2016 dangled the prospect of pardons to two people under investigation, Michael T. Flynn and Paul Manafort. And in 2018, Mr. Trump’s public statements related to Michael D. Cohen, his former personal lawyer who was under investigation by federal prosecutors, were looked at as possible acts of obstruction of justice.

How did Trump and his aides react to the violence?

One of the biggest issues is what exactly Mr. Trump was doing for the 187 minutes of the attack and what exactly the White House was doing to combat it. According to Ms. Hutchinson, the answer was: not much.

On the day of the attack, Mr. Trump rebuffed efforts by his aides and family members, including his daughter Ivanka, to put out a statement telling the mob to stand down. Instead, he posted to Twitter attacking Mr. Pence.

“Mark, we need to do something more,” Ms. Hutchinson said she heard the White House counsel, Pat Cipollone, tell Mark Meadows, the chief of staff, as he rushed into her office after Mr. Trump’s supporters began entering the Capitol. “They’re literally calling for the vice president to be f-ing hung.”

“You heard him, Pat,” she said Mr. Meadows responded, referring to Mr. Trump. “He thinks Mike deserves it. He doesn’t think they’re doing anything wrong.”

Is her testimony credible?

Given the stakes, it is not surprising that Trump allies in particular are seeking to poke holes in Ms. Hutchinson’s testimony to undermine her credibility. The assertions by unnamed Secret Service officials disputing her account of what happened in Mr. Trump’s vehicle have provided one way for Mr. Trump’s supporters to raise questions about her reliability.

Her relative youth — she is 26 years old — belies a canniness and intelligence, her former colleagues said. One former colleague, Sarah Matthews, who was a deputy press secretary, stood by Ms. Hutchinson and praised her for her bravery.

But another former colleague challenged a different portion of her testimony. Eric Herschmann, a lawyer who worked in the White House and who has testified privately before the committee, said in a statement that he was the author of a note that Ms. Hutchinson testified she had handwritten. The note suggested language for Mr. Trump to use to call off the mob storming the Capitol.

The note was written on “chief of staff” letterhead and read, “Anyone who entered the Capitol without proper authority should leave immediately.” Ms. Hutchinson testified it was her handwriting and that Mr. Herschmann had suggested edits.

Yet a spokesman for Mr. Herschmann said, “The handwritten note that Cassidy Hutchinson testified was written by her was in fact written by Eric Herschmann on January 6, 2021.”

A spokesman for the committee said the panel understood there was conflicting testimony about who wrote the note, but lawmakers believe Ms. Hutchinson was being truthful, and that “what’s ultimately important is that both White House officials believed that the president should have immediately instructed his supporters to leave the Capitol building. The note memorialized this. But Mr. Trump did not take that action at the time.”

That two people are claiming to have written the same note captures the difficulty in assessing an accurate picture around the events of Jan. 6, but also will add to questions about Ms. Hutchinson’s recollections. 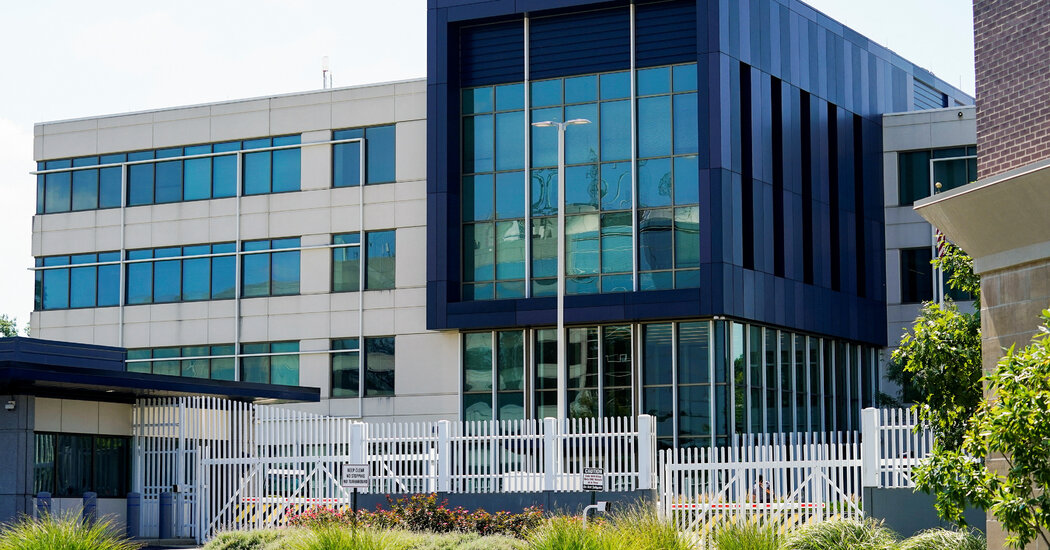 Man Accused of Trying to Break Into F.B.I. Office Is Killed in Standoff