WASHINGTON — A federal judge handed a crucial free-speech victory to six University of Florida professors Friday, ordering the university to stop enforcing a policy that had barred them from giving expert testimony in lawsuits against the state.

The stinging ruling, by Judge Mark E. Walker of U.S. District Court for the Northern District of Florida, accused the university of trying to silence the professors for fear that their testimony would anger state officials and legislators who control the school’s funding. Judge Walker likened that to the decision last month by Hong Kong University to remove a 25-foot sculpture marking the 1989 massacre of student protesters in Beijing’s Tiananmen Square by the Chinese military, apparently for fear of riling the authoritarian Chinese government.

If the comparison distressed university officials, he wrote, “the solution is simple. Stop acting like your contemporaries in Hong Kong.”

A university spokeswoman, Hessy Fernandez, said school officials would review the order before deciding whether to appeal it.

Technically, the 74-page order limits the university only temporarily, until there is a ruling in the professors’ lawsuit challenging the policy. But the judge, who was appointed in 2018 by President Barack Obama, left scant doubt that his opinion of the school’s conduct was unlikely to change, stating that the evidence on the “defendants’ side of the scale sits empty; plaintiffs’ overflows.”

On its face, Judge Walker said, the school’s policy violated the First Amendment by silencing professors who were critical of the state but letting others speak freely, a violation known as viewpoint discrimination.

The order was a turning point in a dispute that has tarred the reputation of one of the nation’s leading public universities and sparked an investigation by the body that accredits it. It also has fueled criticism of Governor Ron DeSantis, a Republican, who has denied pressuring the school to rein in faculty conduct that questions his administration’s policies.

And it has uncovered a trove of evidence that, despite university officials’ flat denial that they felt political pressure, faculty members did. In a report issued last fall, the Faculty Senate complained of “palpable reticence and even fear,” alleging that some school employees had been warned “not to criticize the Governor of Florida or UF policies related to Covid-19 in media interactions,” and that barriers had been raised to publishing data on the pandemic.

Among many other charges, the report also said some faculty had been told not to use the words “critical” and “race” in the same sentence, a reference to the fever on the right over critical race theory.

A lawyer for the professors, David O’Neil, called the ruling “a resounding victory.”

“I think the judge recognized what the university is doing for what it is: an effort to bring a state university under the control of the ruling party in state government,” he said. “If the First Amendment means anything, it means that government can’t pick and choose what speech is permitted based on its viewpoint.”

Three political science professors brought the lawsuit in October after university officials rejected their requests to act as expert witnesses for plaintiffs challenging the state’s restrictive new voting law. They were later joined by a pediatrics professor who had been barred from testifying in a lawsuit challenging Mr. DeSantis’s executive order withholding funds from schools that enforced mask mandates.

Two law professors also joined the suit, saying they had been barred from signing a court brief in a lawsuit against the state unless they hid their affiliation with the school.

Each was told that the actions violated a new conflict-of-interest policy that limited school employees’ involvement in matters “adverse to UF’s interests” — in these cases, opposing the state government of which the university is a part — even though they were acting as private individuals, on their own time.

“And what are UF’s interests?” he wrote. “Why must Defendants regulate Plaintiffs’ speech? How does Plaintiffs’ speech prevent the efficient delivery of government services, impair discipline, workplace harmony or employer confidence?

“Despite being given not one, not two, but four chances to articulate either in writing or at oral argument how Plaintiffs’ speech disrupts UF’s mission, Defendants cannot or will not say.”

In court, lawyers for the university argued that the professors’ challenge was moot because the university had lifted the bans on their lawsuit testimony in November and rewritten the conflict policy to make future such bans more difficult.

But the judge rejected that, noting that the school had not agreed to stop censoring faculty members’ testimony and that the chair of the school’s board of trustees, Morteza Hosseini, indicated little had changed. In remarks to the board last month, Mr. Hosseini said faculty members performing outside work could be neglecting their duties and misusing university funds, and were taking advantage of their positions “to improperly advocate personal political viewpoints to the exclusion of others.”

“It must stop, and it will stop,” he said. “Let me tell you, our legislators are not going to put up with the wasting of state money and resources, and neither is this board.” 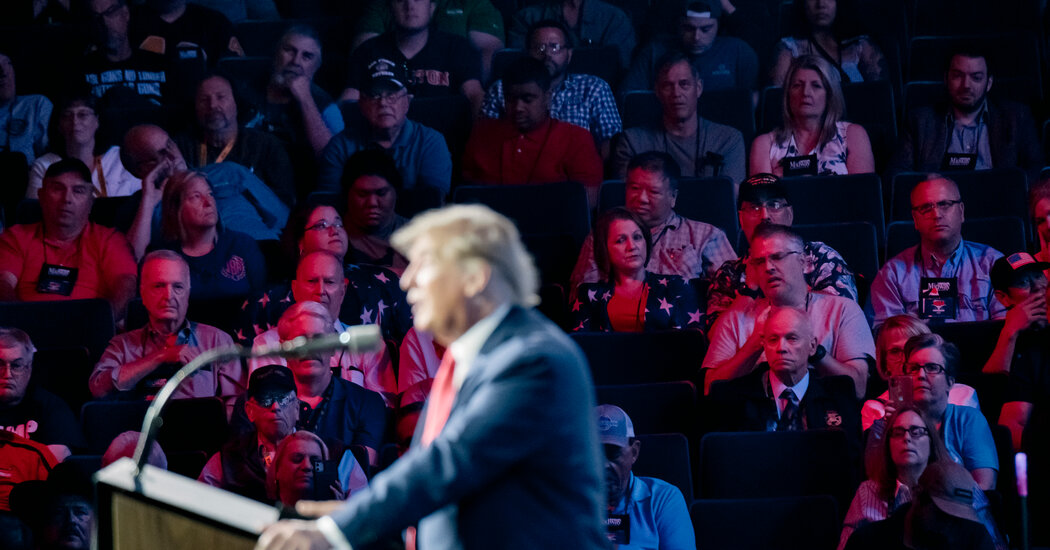 Fact-Checking Trump and Cruz at the N.R.A. Convention