A stepdad was stabbed on his doorstep by his partner’s ex over a Grand Theft Auto argument.

Emergency treatment had to be given to victim Brendan Quinn after his partner’s ex Tyrone Perkins hit out at him for allowing his young son to play the 18-rated video game.

Perkins, 36, was furious his young son was permitted to play the game and stabbed Quinn at least three times as a result.

The 36-year-old, from Birmingham, was first charged with attempted murder after the stabbing in Cheltenham on February 6, GloucestershireLive reports.

But the prosecution reduced the charge to wounding with intent to cause grievous bodily harm and possession of an offensive weapon in public.

The scene of the stabbing in Cheltenham, Gloucestershire

Perkins admitted those offences and was jailed at Gloucester Crown Court on Thursday.

Prosecutor Ian Fenny explained that Perkins’ relationship with his wife Rebecca had broken down in 2019 and he moved to Birmingham.

Fenny said: “Perkins chose to use social media to vent his views and made defamatory remarks over certain issues towards his former wife Rebecca and her new partner Brendan Quinn.”

“Rebecca states that his comments were often abusive and bullying towards her.

“Perkins returned to Cheltenham on February 4 this year to pick up his son for the weekend and when he returned with the boy on Sunday, February 6, he had already made additional comments on social media over the weekend about his concerns over his son watching Grand Theft Auto video game.

“Mr Quinn decided that the time was right to have a quiet word with Perkins about the abusive remarks that he had made about him on Facebook. He tapped him on the shoulder in a bid to clear the air, but Perkins failed to engage with him.

“Instead, Perkins turned around and punched Mr Quinn in the face. This resulted in a brief scuffle between the two men.

“Perkins then left and returned to his van. A neighbour saw him pause for a few moments and remove his jumper and then open the van and take two kitchen knives out of the back of it. He returned to the garden in Broad Oak Way in Up Hatherley.

“Perkins approached Mr Quinn in a rage and began lashing out at him. Mr Quinn tried to defend himself and was subsequently stabbed in his forearm and twice in his back.

“Rebecca heard the commotion from an upstairs window and rushed down to challenge Perkins. It was only then did she realise that Perkins had a knife in his hand. Perkins then left the scene and drove off in his van.”

The court heard that Rebecca then noticed that Mr Quinn was bleeding heavily and called the emergency services. Her neighbours helped Rebecca who was screaming loudly and was hysterical.

Tyrone Perkins was jailed at Gloucester Crown Court on Thursday.
(

The paramedics arrived within minutes and immediately assessed that Mr Quinn was in danger of having collapsed lungs and operated on him immediately because the situation could have easily become life threatening.

Mr Fenny said: “The paramedic’s quick thinking unquestionably avoided a much more serious outcome. On Mr Quinn’ s arrival at hospital he was treated for his wounds and remained as an in patient for five days, during which time he needed surgery to repair his arm and chest drains.

“Mr Quinn’s doctor states that the incident has had an impact on his mental well being.”

In a victim statement, Mr Quinn said: “I truly believed I was going to die from this attack. I am so thankful that I have survived and my physical injuries are healing.

“However, this has not only impacted on my life but my partner and my children’s lives as well.

“I can remember lying on the floor and feeling what I thought was water running down my back. I felt like I was descending into a deep sleep.

“It was only when the paramedics were treating me that I had been stabbed in the back.”

Mr Quinn went on to say that he was “in an extreme amount of pain” while in hospital and was placed on a ward where people were dying. “I thought I was dying too,” he said.

“I was alone for a long time and panicked a lot. I discharged myself as soon as I could. When I arrived home I walked back into the crime scene where I was stabbed. I began to suffer from flashbacks. I never used to suffer from anxiety.

“I’m still taking medication. The doctors tell me that I am lucky to be alive. However, I have lost the sensation in my fingers. The incident has impacted on my interaction with my family.

“I have mixed emotions towards Perkins. I struggle over the situation he is in. It confuses me why I should feel so sorry for him. I want to be angry and to hate him. I know this is how I should feel as he has ruined my life in one moment of rage. It’s put pressure on my relationship with Rebecca.

“Even though I am a victim, the court process has made me feel guilty. We have considered moving house for a fresh start.

“Everything has been a roller coaster of emotions and I am now able to focus on the future.

“I would like to publicly thank the paramedics, hospital staff, the police and the Crown Prosecution Service for all their help in my recovery.”

Rebecca stated: “When Brendan was taken to hospital, I thought he was going to die. I can recall seeing him all wired up in hospital. I asked the hospital staff if he was going to make it. They wouldn’t tell me and only said that they were trying to make him stable.

“I felt scared for Brendan. I was shocked that Perkins could do this to another person. It makes me feel sick in that somebody I was so close to could have killed another man.

“Since the incident I have found myself having panic attacks. I can’t help thinking that the stabbing incident, is all my fault. The only reason Perkins was being abusive towards me because of the text messages. I should have done more to prevent this happening.

“When I am cooking I can no longer use large knives, because when I look at it, it reminds me of the incident and the knife entering Brendan’s body.

“My home no longer feels like a home. For many weeks it looked like a sterile crime scene with the amount of police and others that have been through it.”

Joseph Keating defending said: “Perkins wishes to reiterate that when he was punched to the face and took hold of Mr Quinn and as they fell to the floor they both threw punches at each other.

“Another reason for the ‘red mist’ coming down over Perkins it wasn’t because of the injuries he had just received. It wasn’t just a tap on the shoulder and him reacting badly.

“It was an emotional reaction for which there had been a lot of background heat which had gone on previously.

“His response was that he was now being spoken to about the concerns he had already raised on his social media about his son watching the video game.

“Perkins doesn’t want anybody to think this incident arose out of the breakup of his relationship with his former wife.

“The friction between himself and his former wife and her partner began when he picked up his young son on the weekend who told him that he had been playing a video game, namely Grand Theft Auto, which is an 18-rated video game.

“Perkins then raised the issue with his former wife and her partner. He states that aside from its certification it had graphic violence. His felt his concerns were not being treated seriously and he took to social media to vent his concerns.”

Mr Keating added: “Perkins understands that he is in a very serious situation and it is only due to good luck and the expertise of the paramedics and the hospital staff that this he is facing a more erroneous charge.

“Perkins didn’t go to that address that day intending for this to happen. He didn’t go equipped to cause harm, but he knew the knives were in his vehicle.

“This incident is very much out of character for Perkins who is somebody, despite the friction with his former wife, is that his main concern is that of his son.

“Perkins, who is a trained chef, has regretted his course of action from the moment it happened. It was a momentary explosion of anger.

“He said he saw red when Mr Quinn put his hand on his shoulder. He doesn’t know why.

“On his return to Birmingham he contacted his local police station and told the officers that he’d been involved in an incident in Cheltenham. He didn’t bury his head in the sand and effectively admitted his guilt by doing this and was subsequently arrested.”

Judge Ian Lawrie QC told Perkins: “I accept this was a momentary explosion of temper, which should have been better controlled.

“I accept there was a background context to this over the exchanges you had with your former wife and her partner. I am not concerned with the social dynamics of this, but your reaction on that day.

“You are a man of intelligence who is normally calm tempered. However you had an emotional meltdown on that day in February. You showed no restraint and were violent although there had been a confrontation between you and Mr Quinn. You went to your van and retrieved two knives.

“In your temper you used those knives without inhibition. You caused significant injures to Mr Quinn, two stab wounds in the back and one in his forearm.

“This wasn’t a prolonged incident in the legal sense, but it had a significant impact on your victim.

“I’ve read the victim impact statements and whilst Mr Quinn has suffered significant injuries, he is thankfully not a corpse.

“This was an incident in a domestic context. All the letters you have written to this court, the victims and others show your calmer reflection in which you apologise for your actions and show deep regret and remorse.

“When you are not losing your temper, you are a good man. I understand that you want to apologise publicly to Mr Quinn, but that is something that can be arranged in the future.

“I have no option but to impose an immediate custodial sentence of three years and four months.”

The judge formerly recorded a not guilty verdict on the attempted murder charge which the defendant had denied.

He also ordered the forfeiture and destruction of the knives used in the incident and imposed an indefinite restraining order not to contact his former wife or Mr Quinn, except via lawyers. 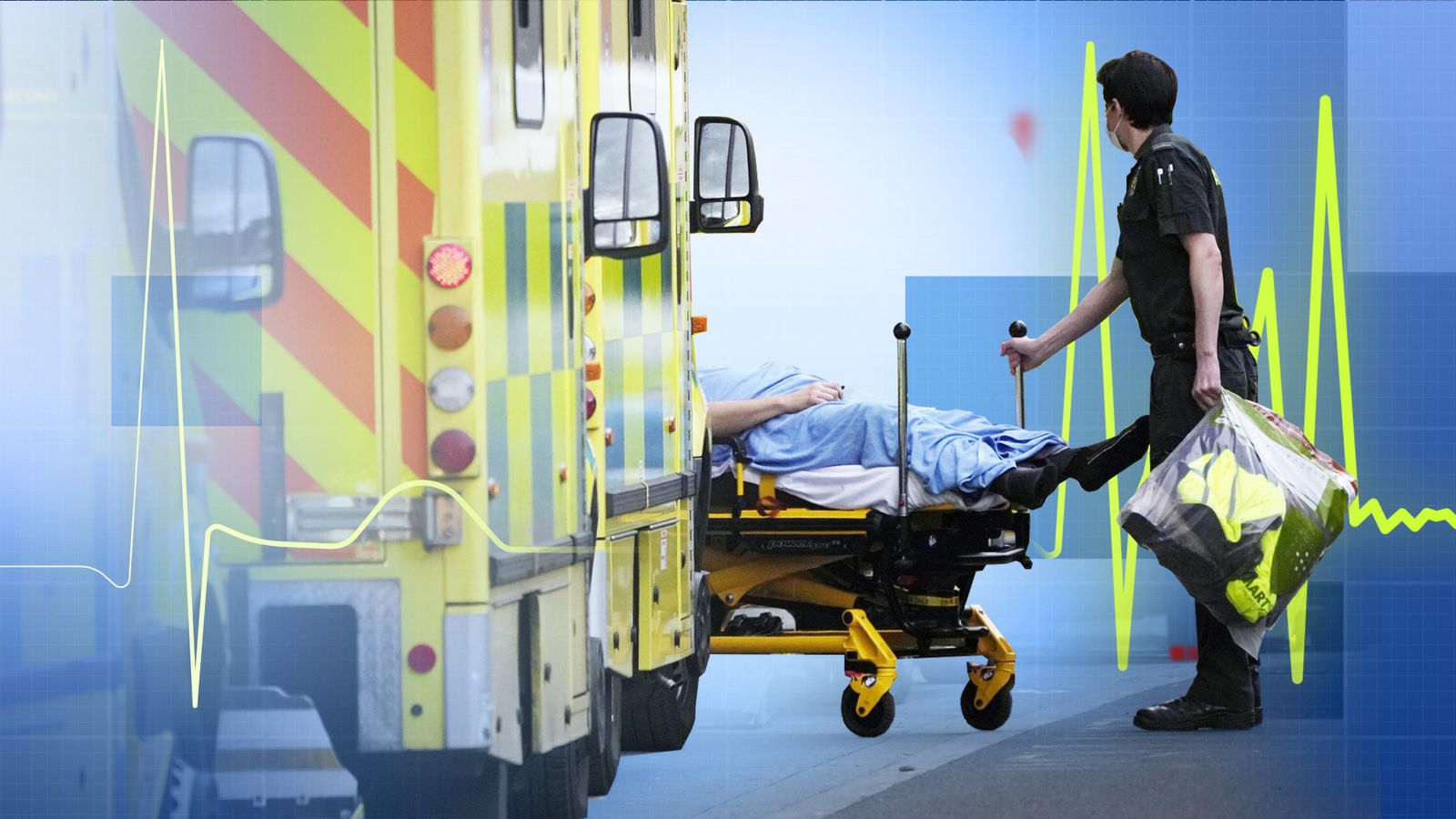 NHS crisis: Politicians are not offering a comprehensive solution on how to fix the health service