Prince Harry and Meghan Markle being seated away from senior royal was no accident, a royal expert has claimed.

The Duke and Duchess of Sussex appeared on the opposite side of St Paul’s Cathedral from Prince William, Kate Middleton, Prince Charles and Camilla Parker Bowles for Friday’s Jubilee service.

Instead, Harry and Meghan were sandwiched between the Queen’s niece Lady Sarah Chatto and Princess Eugenie’s husband Jack Brooksbank.

The Queen chose her seating plan purposefully for the National Service of Thanksgiving in a nod towards the future, the expert claims.

It meant despite the foursome all attending the ceremony together, they did not come into contact.

“She knows she has to begin to pass her duties on and she has been giving us clues to the future,” royal expert and biographer Ingrid Seward wrote in The Sun.

“Her Platinum Jubilee photo, showing her sitting in the Victoria Vestibule at Windsor Castle overlooking the statue of King Charles II, was symbolic hinting King Charles III will soon be with us.

“But the Duke and Duchess of Sussex are clearly not part of the plan.”

Ms Seward explained that the Queen’s balcony appearance with her heir Prince Charles and his son Prince William on Thursday was also a symbolic of the future and the hope for what is to come.

The Queen does not enjoy being taken advantage of and knows that Harry will be granted his “wish to be free” when she passes on the crown to Prince Charles, the expert added.

William, 39, and Kate, 40, took their seats on the right side of St Paul’s Cathedral, occupying the same pew as Princess Anne, Prince Charles and Camilla.

While Harry, 37, and Meghan, 40, sat with Princess Beatrice, Princess Eugenie and their husbands Edoardo Mapelli Mozzi and Jack Brooksbank.

The brothers and their wives did not appear to interact with one another at the church service.

Their last joint public appearance was for the Commonwealth Service at Westminster Abbey in March 2020, three months after Harry and Meghan revealed they would be stepping back from their senior royal duties.

The couple moved to America several days later and now live in Montecito, California, with their son Archie, three, and one-year-old daughter Lilibet.

They officially resigned from their royal duties last February but have returned to the UK to take part in the Queen’s Platinum Jubilee celebrations. 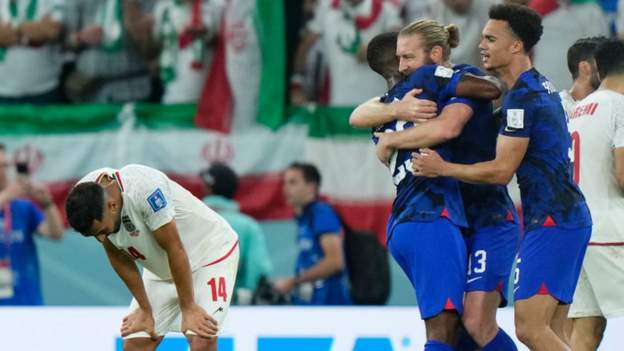 USA relishing Dutch battle – with or without Pulisic