Safrina Safri Bowman, 32, didn’t realise she’d lost her credit card as she travelled to work but two kind-hearted nine-year-olds found the card and returned it home to her safely

A mum has been blown away by the selfless acts of two girls who tracked her down in a heartfelt good deed.

Safrina Safri Bowman lost her credit card on her way to work but didn’t realise later until she got to the petrol station.

The 32-year-old mum-of-one carried on her busy day until an hour later she received a notification from the doorbell camera at her home.

She was blown away by the kind gesture that followed, Edinburgh Live reports.

Two kind-hearted nine-year-olds had found her card and brought it to her small cul-de-sac home to return it to her.

Hania Zawadzka and Amelia Maciak had figured out where she lived and they pushed a note through her door and once in the hope of finding the card’s owner.

The two nine-year-olds captured on the doorbell camera
(

Once the smart kids had confirmed it was Safrina’s card, they handed it back to her.

The next day, the grateful 32-year-old went to the girl’s house to meet their proud mums Wioleta and Katarzyna.

To show her appreciation she gave them a thank you gift which included easter eggs and a cash reward.

She said: “I went to work on that day and had taken my credit card out along with some other items and started my support worker job.

“I left the house at 3.19pm and stopped at Morrisons to get petrol and I couldn’t find my credit card.

“It was a weird moment where you think to yourself I’m pretty sure I took it out with me but I didn’t think much of it, maybe I forgot to take it as I had other items that I brought out as well.

“I started work around 3.45pm and I got a notification from my door bell from the girls at 3.58pm and that’s when I had realised I had lost it.

Safi with the girls proud parents Wioleta and Katarzyna
(

“The girls were sceptical at first and asked me details on my card which I confirmed and they posted it through my letterbox and I had asked where they lived and stated they lived just across the road from me about 30 yards away.

“I told them I would come and see them today or tomorrow when I’m free and thanked them.

“I had finished my tea calls around 6pm and wasn’t due out for bed calls until 7.30pm and that’s when I put together the gifts and went to their house and presented the gifts.”

The impressed business owner explained why the small act of kindness was so special.

“The parents especially are happy and proud, I’ve made new friends and taught the girls values and morals of their good deeds.

“It’s always what I try to do with other kids to teach them right and wrong as kids are our future,” she said.

She continued:”They all gave me a big hug and smiled. I had met the father on the day of giving them gifts on the same day but I hadn’t met the mothers yet until yesterday, they were all there and invited me in for a coffee.

“I ended up staying for about 2 hours, talking about our different cultures, they’re Polish and I’m Chinese/Malaysian and we had similarities which was endearing when exchanging stories.

“We all had a lovely chat and a lot of laughter and getting to know what the girls liked, how school was.”

The stranger was blown away by their kindness and shared the heart-warming tale on Facebook originally.

She said: “To the parents of the lovely girls who returned my credit card, you have raised them really well.

“Instead of going on a contactless spending spree they both chapped on every single door in my neighbourhood until they found me, not only that, they were both asking me card details to make sure I was the rightful owner.

“Just a little appreciation and reminding them that for being genuine and honest, you will reap rewards.

“Thank you girls, I was so happy with their excitement when I gave them their gifts.

The heartwarming post gathered hundreds of likes from locals who were proud of the the girls admirable behaviour with many applauding the kind act.

One local said: “It’s lovely to know there are kids like this in the world. So kind of them. So lovely of you too acknowledging their kindness.”

Another exclaimed: “This is absolutely amazing, well done girls!! And well done to you yourself for giving these girls the recognition. Lovely to see.”

While one resident added: “What a fantastic post to read. Totally cheered me up.” 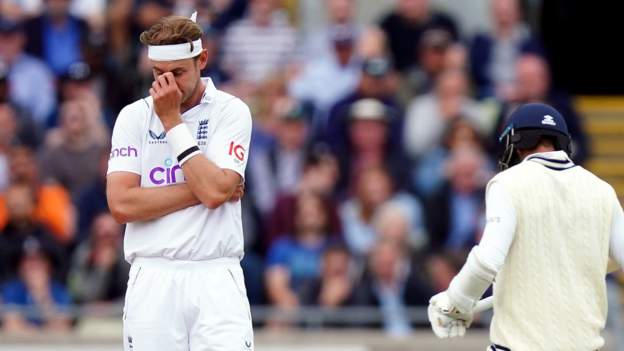 ‘Chaos’ as Broad concedes record 35 runs in an over