Foreign Secretary James Cleverly has urged his ministerial colleagues to keep their views on government policy “around the Cabinet table” as Liz Truss faces an open split within her top team over the 45p tax rate U-turn.

The senior Cabinet member warned his peers that it is “always better to feed straight into the boss” if there are any issues regarding “policy or the relationship with other ministers”.

On Tuesday, Home Secretary Suella Braverman accused Tory MPs of staging a “coup” against the PM over the 45p tax rate – a policy which was unveiled in Chancellor Kwasi Kwarteng’s tax-cutting mini-budget last month and reversed last week.

“She chose the words that she chose,” the foreign secretary told Sky News, responding to Ms Braverman’s comments.

“But when you’re in government, you have the opportunity to feed your ideas straight to the top machine. It’s always best done around the Cabinet table or in the Cabinet committee meetings.

“My view is anything to do with policy or the relationship with other ministers – always better to feed straight into the boss”.

Speaking at a Telegraph event at the Conservative Party conference, Ms Braverman said she had been “in favour” of scrapping the top rate of income tax and was “disappointed” by the government’s U-turn.

She also criticised those in her party who had “undermined the authority of our prime minister in an unprofessional way”.

Fellow Cabinet minister Simon Clarke also publicly disclosed his objection to the reversal of the policy.

The Levelling Up, Housing and Communities secretary posted on social media: “Suella speaks a lot of good sense, as usual.”

The tax cut for the wealthiest 1% was one of a raft announced by Mr Kwarteng in his mini-budget less than two weeks ago that led to market turmoil – with the pound plummeting, the Bank of England having to step in to rescue pension funds and mortgage products being withdrawn.

Do the public and Cabinet still trust Truss?

Despite standing by the policy in the opening days of the conference, Mr Kwarteng confirmed on Monday it would no longer go ahead, saying the measure had become a “distraction” from his objective to grow the economy.

Mr Cleverly told Kay Burley that “a lot of discussions weren’t able to be had” over the chancellor’s mini-budget proposals because of the death of the Queen.

The foreign secretary also disputed that a U-turn took place, adding: “What you’re describing as a U-turn is the smallest element of a really big and significant support package to families, tax cut to families, stimulus package for the British economy.”

Ms Truss is also facing the threat of another major split within her top team over the level of benefits.

On Tuesday, Leader of the House of Commons Penny Mordaunt joined backbench rebels in calling for welfare payments to be raised in line with inflation, which has been at around 10%, rather than earnings at 5%.

The PM has refused to commit to raising benefits in line with inflation, saying she has “not made a decision” on whether to stick to the benefit uprate promised by her predecessor Boris Johnson.

In a few hours, Ms Truss will deliver her keynote speech at the Conservative Party’s conference in Birmingham as she battles to save her premiership just one month into the job.

The PM will wrap up the event by defending her approach and pledging a “new Britain for the new era” after a week of U-turns and infighting. 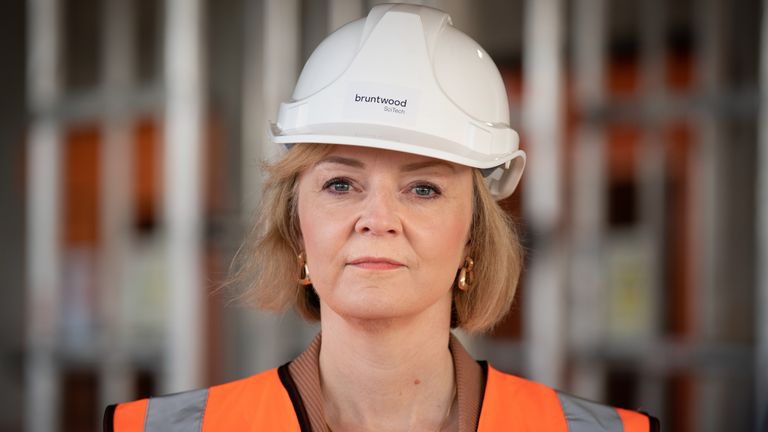 PM: I am ‘not ashamed’ for listening

The prime minister will tell her audience: “Whenever there is change, there is disruption. Not everyone will be in favour.

“We need to grow the pie so that everyone gets a bigger slice.”

She is expected to say: “I am determined to take a new approach and break us out of this high-tax, low-growth cycle.”

Ms Truss will also put her government forward as having an “iron grip” on the UK’s finances that will help everyone.

The hall in Birmingham is not expected to be full as many MPs said they were leaving on Tuesday evening ahead of train strikes on Wednesday.

Liz Truss’s speech is due to take place at 11am on Wednesday. Follow live updates and analysis on the Sky News Politics Hub and on TV.