Laboratory tests using a jet of water have helped physicists determine the ideal angle of urination to minimise splashback at a urinal, and led to an elongated design for urinals that drastically reduces splatter.

“The idea originated exactly where you think it did. I think most of us have been a little inattentive at our post and looked down to find we were wearing speckled pants,” says Zhao Pan at the University of Waterloo in Canada. “Nobody likes having pee everywhere, so why not just create a urinal where splatter is extremely unlikely.”

Enter the splash-free urinal. To design their urinal, Pan and his team had to find the angle at which a stream of liquid hitting a surface produces the least splash. They solved this problem with a computer model that reproduced some previous observations of how dogs urinate. Pan says that dogs instinctively know that lifting their leg will get them closer to a “magic angle” between the urine stream and a tree, or some other vertical surface, that minimises splashback.

To measure how much a given urinal splatters, the researchers directed a jet of water onto test urinals made of very dense foam covered in epoxy. In this splatter test they pitted two experimental designs (the urinals at centre and second from the right, pictured above) against a standard commercially available design and one similar to the urinal featured in Marcel Duchamp’s famous artwork “La Fontaine” (the second and first from the left).

They varied the speed of the jet between different experiments and wiped the splatter with paper towels afterwards. Then they weighed the wet paper towels and compared that to the towel’s dry mass to measure how much water had to be absorbed to clean up the mess. The largest difference in mass corresponded to most hazardously splashy urinals.

Using the dog urination data and the tests with water jets at various flowrates and heights, the researchers determined that for the average human, the magic splash-reducing angle for urination at a urinal is approximately 30 degrees. Accordingly, they designed their test urinals so that no matter what a person does, the impinging angle for urine is close to this value.

While urinals in many public restrooms resemble shallow rectangular boxes, the researchers’ favoured design was deeper and more elongated, allowing for people of most height to achieve the 30-degree angle. As its curvature is similar to a Nautilus shell, the team nicknamed it Nauti-Loo (the second urinal from the right in the image above). In the paper towel test, standard urinals produced up to 50 times as much splashback as this new design.

A rounder urinal design with a triangular opening performed twice as well as the Nauti-Loo in the splashback test, but was not favoured because it doesn’t work for people of all heights. Pan’s colleague Kaveeshan Thurairajah at the University of Waterloo will present their results on 22 November at the annual meeting of the American Physical Society’s Division of Fluid Dynamics in Indianapolis, Indiana.

Pan thinks that replacing standard urinals with this low-splash version could make restrooms more sanitary and save on cleaning costs for businesses, but the team has not yet determined how much it would cost to mass-produce. 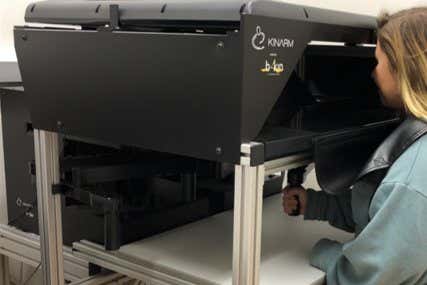 Mammals That Live Together Live Longer