Oil prices rose to a fresh seven-year high and Asian equities and European stock futures fell on Monday as US officials warned a Russian attack on Ukraine appeared to be imminent.

Joe Biden on Sunday spoke to his Ukrainian counterpart and said Washington would respond “swiftly and aggressively” to any Russian military action, according to the White House.

The last-ditch effort by Scholz comes as western nations withdrew diplomatic and military personnel from Ukraine and some European countries braced for an influx of refugees in the event of military action.

On Monday, energy prices climbed as investors digested the latest Ukraine developments. Brent crude, the international benchmark, climbed as much as 1.8 per cent to $96.16 a barrel, marking the highest level since September 2014 and reflecting a rise of about 23 per cent year to date.

The uncertainty also boosted natural gas futures, which rose as much as 4.9 per cent to $4.13 per million British thermal units.

“The whole situation remains quite fluid,” said Marcella Chow, global markets strategist at JPMorgan Asset Management in Hong Kong. Chow added that energy markets in particular remained on edge as Russia was responsible for a third of Europe’s natural gas and 10 per cent of global oil production.

“If there are any disruptions or threats of shutdowns for supply, that will naturally push prices higher from the already elevated levels we’ve seen so far,” she said.

The potential for conflict in Ukraine sent equity markets in Asia lower. Hong Kong’s benchmark Hang Seng index shed as much as 1.7 per cent, while Japan’s Topix and South Korea’s Kospi both closed 1.6 per cent lower.

The falls for global stocks came on the back of a sell-off for Wall Street on Friday, where the S&P 500 dropped almost 2 per cent. 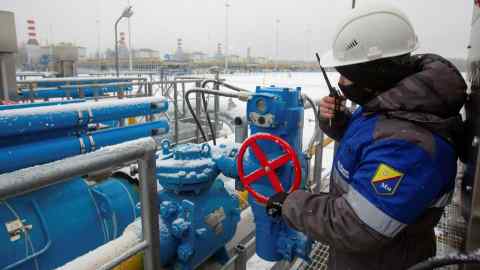 Futures markets pointed to losses for European stocks when markets open later in the day, with the Euro Stoxx 50 tipped to shed 1.6 per cent. The FTSE 100 was expected to fall 0.5 per cent.

Bond yields, which fall as prices rise, were largely steady in Asian trading following a sharp gain late last week after Biden warned tensions between Ukraine and Russia could escalate.