What caught my eye this week.

A friend of mine was bemoaning how some of his staff were not enthusiastic about his upcoming office Christmas party.

Covid cancelled the previous two. My extrovert friend is beside himself to get back to the minefield of Secret Santa, the lottery of dinner seating, and drunken karaoke with two bemused blokes from the Reading office.

I suggested that if somebody didn’t want to join the party, he just gave them £100 in lieu to do whatever else they liked instead.

Which went down like the mini Bounties in a box of Celebrations.

Of course my friend protested that this was a bonding event. Which was what justified the £10,000 budget. An investment in team morale. A chance for colleagues who’d never met to get to know each other.

Indeed anyone who would actually take the £100 alternative would only be revealing themselves as being outside of the team.

The opposite of what he was trying to achieve!

Look, I see both sides. And I’ve been to some excellent office parties featuring genuine friends. Albeit usually as a contractor who rarely saw an 8.45am start with the gang – as opposed to being a wage slave forced to spend another six hours of my life with Gary from accounts, when all that keeps me sane is the 40-hour cap on Gary in a normal working week.

I don’t believe anyone should be put through the cruel and unusual punishment of an office party if that’s how they’ll find the forced festivities.

Besides, wouldn’t my suggested £100 Get Out Of Jail bonus equally inspire warm feelings from somebody dreading the alternative?

I believe so, but I didn’t win over my friend.

And so somewhere in London in the next two weeks you might run into yet another 50 incongruous diners in variously coloured paper hats talking about the prospects for an upcoming trade show – only to be interrupted by my friend standing up to deliver his surely-hilarious end of year awards.

He can’t say he wasn’t warned.

But what do you guys think? Am I being a Mr Scrooge? Or has the pandemic put the clad-iron case for certain office rituals to the sword forever? Share you worst – or who knows, maybe your best – Christmas party anecdotes in the comments below.

Emergency funds: how much to save, where to keep it, and when to use it – Monevator

From the archive-ator: An investor among the anti-capitalists – Monevator

Note: Some links are Google search results – in PC/desktop view click through to read the article. Try privacy/incognito mode to avoid cookies. Consider subscribing to sites you visit a lot.

House prices set to fall 5% next year, says Zoopla – This Is Money

Oil prices are back below to pre-Ukraine invasion levels – Axios

The happiest places to live in Great Britain revealed – Which

Five million in the UK are on out-of-work benefits. Here’s the proof – Spectator

The best mortgage rates for home buyers and movers – Which

Last chance to claim! Cashback offer expires 12 December Open an account with InvestEngine via our affiliate link and get £25 when you invest at least £100 (new customers only, T&Cs apply) – InvestEngine

When are the best ways and last dates for sending Christmas parcels? – Guardian

The American Express Small Shops scheme is back: how to earn £25 – Which

Homes for sale near Christmas markets, in pictures – Guardian

Does this count as market timing? – Oblivious Investor

A year of pain: investors struggle in a new era of higher rates [Search result] – FT

Everything in its right place – Fortunes & Frictions

How much growth can you expect? [US but relevant] – Of Dollars and Data

How to avoid arguing over money – Morningstar

Why they clapped for Sam Bankman-Fried – The Reformed Broker

The IPO outlook in one word [Search result] – FT

Who says you can’t time the market? – The Felder Report

An ARKK-typical problem – Klement on Investing

Why value investing can keep on performing – Franklin Templeton 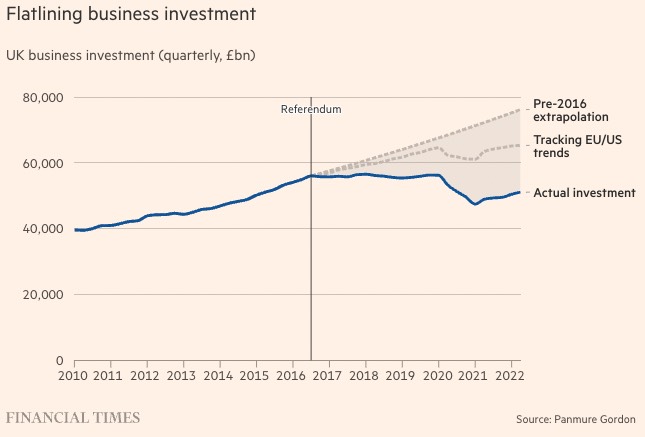 Brexit and the economy: the hit has been ‘substantially negative’ [Search result] – FT

Bad Blood: Secrets and Lies in a Silicon Valley Startup by John Carreyrou – £0.99 on Kindle

Surrounded by Bad Bosses and Lazy Employees by Thomas Erikson – £0.99 on Kindle

The Business Book by DK Publishing – £1.99 on Kindle

(Don’t have a Kindle? Buy one and join the cheap and tidy book club!)

ESG investing after the war – Klement on Investing

Is AirBnB about to go after the longer-term rental market? – Dror Poleg

The myth of the 25-year old brain – Slate

What do you want? – Humble Dollar

You left out the all CAPS part – Seth’s Blog

“Reality is a fiction with an unlimited budget.”
– Hernan Diaz, Trust

Like these links? Subscribe to get them every Friday! Note this article includes affiliate links, such as from Amazon and Interactive Investor. We may be compensated if you pursue these offers, but that will not affect the price you pay.

Thanks for reading! Monevator is a simply spiffing blog about making, saving, and investing money. Please do check out some of the best articles or follow our posts via Facebook, Twitter, email or RSS. Holly Mackay: Where do asset managers sit on the consumer duty map?