DRUZHKIVKA, Ukraine — After weeks of bloody street fighting and months of withering artillery fire, Ukrainian forces will withdraw from Sievierodonetsk, a city that President Volodymyr Zelensky once said would determine the “fate” of the Donbas region of eastern Ukraine.

The retreat from the devastated industrial city on the east bank of the Siversky Donets River was confirmed Friday by Serhiy Haidai, the head of the military administration in Luhansk. It represents the most significant loss for the Ukrainian military since Russian forces seized Mariupol a month ago after a similarly brutal campaign of heavy shelling and street fighting left that southern port in ruins.

It means the Russian military can now concentrate fully on taking control of Lysychansk, Sievierodonetsk’s twin city on the west bank of the river and the last city in the Luhansk region still under Ukrainian control. Analysts expect that the Russians will then set their sights on seizing the remnant of the Donetsk region still held by Ukrainian forces, which would complete their conquest of Donbas.

For now, the battle is far from over, and the fight for what has come to be known as the Sievierodonetsk pocket, a slice of territory now roughly 15 miles wide and three-quarters surrounded by Russian forces, has entered a new phase as Russian troops move to encircle Lysychansk.

“Our colleagues are holding on,” said Oleg, a Ukrainian tank crew member whose captured Russian T-80 had pulled off the front for repairs, its dark green hull now repainted with the Ukrainian flag. “They are repelling the enemy’s onslaught and holding the defense.”

Mr. Haidai said that it did not “make sense” for Ukraine to hold on to what he described as broken positions in Sievierodonetsk. About 90 percent of the city’s buildings have been destroyed, according to Ukraine, and only about 8,000 civilians remain out of a prewar population of 160,000.

“The number of people killed will increase every day,” Mr. Haidai said on Friday. “It was decided that our defenders would retreat to new positions, fortified areas, and from there conduct hostilities and inflict damage on the enemy.”

The fight for Sievierodonetsk was brutal. Street-to-street urban combat interspersed with violent artillery barrages meant casualties mounted on both sides. Ukrainian troops tried to slow the Russian advance, using buildings and alleyways to get in close and negate Russia’s superior firepower.

The destruction of the three bridges connecting Sievierodonetsk and Lysychansk in past weeks left Ukrainian forces in an increasingly perilous position: sending in reinforcements to Sievierodonetsk was almost impossible and evacuating casualties was equally difficult.

The wounded “sometimes die because the evacuation is stretching for one-and-a-half hours to two hours,” said Sergiy, a Ukrainian medic stationed in Lysychansk, who noted that often casualties had to be ferried across the Siversky Donets river in small boats. “Human resources are worth more than the buildings that are left there,” he added.

The Ukrainian defenders of Lysychansk will soon face a similar dilemma as the troops who were in Sievierodonetsk. Russian forces have pushed near Lysychansk’s southeastern outskirts after breaking through Ukrainian defenses in the east this week, and are positioning to advance further from the south, cutting off the key highway that runs into the city.

Lysychansk’s defenders enjoy an advantage in its elevated terrain, which provides firing positions for artillery. But if the Russians break through the surrounding villages, the Ukrainian military will begin to lose that edge.

If they conquer the city, Russian troops could then advance southwest, targeting a key strategic supply hub in the city of Bakhmut, where in recent days Russian forces have begun to increase pressure with cruise missile strikes and artillery.

“It increasingly appears that the Sievierodonetsk-Lysychansk pocket could become untenable, but given the limited forces Russia has available they are likely to run into another line of Ukrainian defenses at Bakhmut,” said Michael Kofman, the director of Russian studies at C.N.A., a research institute in Arlington, Va. “Russia is making incremental gains, but its ability to capture the Donbas remains very much in question.”

Ukrainian officials have said that as many as 200 soldiers a day were dying in the fields and villages of eastern Ukraine.

The Russians have also suffered staggering losses, according to military analysts. Some analysts have said that, by holding out for weeks in Sievierodonetsk, the outgunned Ukrainian military forced Russia to pour more men and armor into the fight, severely degrading Russia’s combat abilities in other areas.

The fight, these analysts say, may have allowed time for more longer-range Western weapons to flow into Ukraine and for Ukrainian forces to begin staging counterattacks in other parts of the country.

The Kremlin’s “ideological fixation” on Sievierodonetsk “will likely be to the ultimate detriment of Russian capabilities in future advances in Ukraine,” even though the loss of the city is still a blow to Ukraine, the Institute for the Study of War, a Washington-based research institute, said on Thursday.

Mr. Zelensky had described Sievierodonetsk and Lysychansk as “dead cities” shattered by shelling and emptied of people. He had alternated in recent weeks between explaining the merits and the risks of withdrawing from both cities.

Just over two weeks ago, however, he framed the fight for Sievierodonetsk as pivotal in the broader war for control of eastern Ukraine. “In many ways, the fate of our Donbas is being decided there,” he said in a speech to the nation on June 8.

“We defend our positions, inflict significant losses on the enemy,” Mr. Zelensky said. “This is a very fierce battle, very difficult. Probably one of the most difficult throughout this war.”

Russia’s Defense Ministry said on Friday that its troops had captured 10 Ukrainian villages in the Luhansk region over the past five days and claimed to have cornered up to 2,000 Ukrainian soldiers in the area. The ministry’s claims, which have been overstated or false in the past, could not be independently verified. A spokesman for Ukraine’s Defense Ministry rejected the report as false.

As Russia has claimed more territory, a partisan resistance movement appears to be growing in occupied cities, fueled by Russian repression and worsening economic and humanitarian conditions, not to mention Ukrainian nationalism.

In the latest attack, Ukrainian guerrilla fighters claimed on Friday to have killed a Kremlin-backed politician in the Russian-controlled southern region of Kherson.

Dmitry Savluchenko, the head of the Department of Youth and Sports for the region, was blown up in his car, according to both Ukrainian and Russian officials. Kirill Stremousov, the deputy head of the Russia-appointed administration, called the attack “a vile terrorist act.”

“The threats that come my way won’t break me and my comrades,” he said in a video address, sitting under a portrait of President Vladimir V. Putin of Russia. “No matter what happens, even after us, Russia will be here, and our children will speak Russian.”

Ukrainians celebrated the attack and said their resistance was growing.

“Our partisans have another victory,” Serhii Khlan, an adviser to the head of the Kherson region’s military administration, wrote on Facebook on Friday. “A pro-Russian activist and traitor was blown up in a car in one of Kherson’s yards in the morning.”

The head of the Ukrainian intelligence agency said this week that Ukrainian insurgents had injured another Russia-backed official, Oleksiy Kovalyov, in the Kherson region. At least two more attacks on people working with Russians in the regions of Kherson and Zaporizhzhia were also reported this week.

The Russians did not acknowledge all of the attacks, which have been reported by witness accounts relayed to Ukrainian officials.

Ivan Fedorov, the exiled mayor of Melitopol who is an unofficial spokesman for the Ukrainian resistance in his city, said at a news conference on Friday that rewards were being offered of up to $10,000 for the killing of top proxy leaders for Moscow.

Thomas Gibbons-Neff reported from Druzhkivka, Ukraine, Marc Santora from Warsaw and Michael Levenson from New York. Reporting was contributed by Ivan Nechepurenko from Istanbul and Natalia Yermak from Druzhkivka. 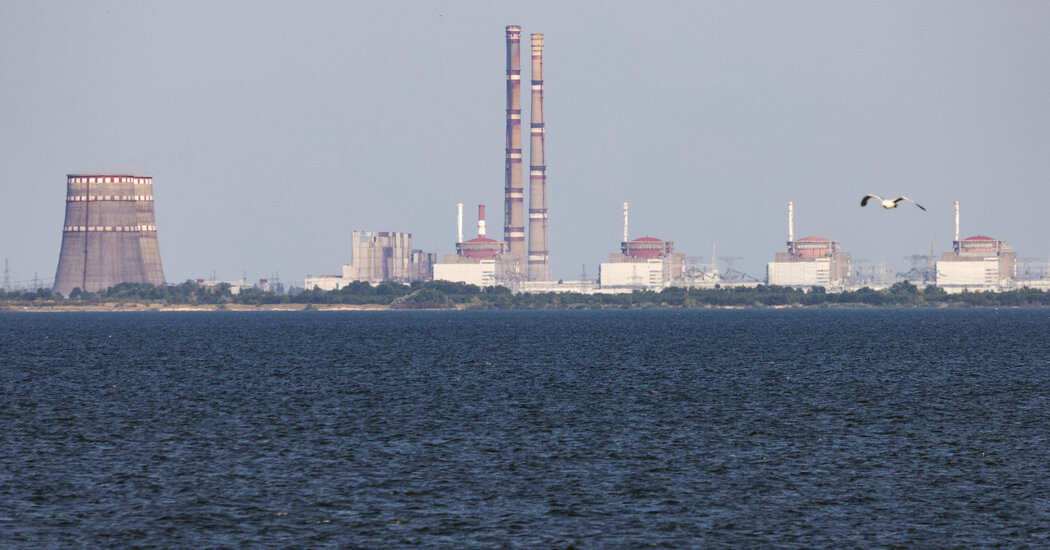 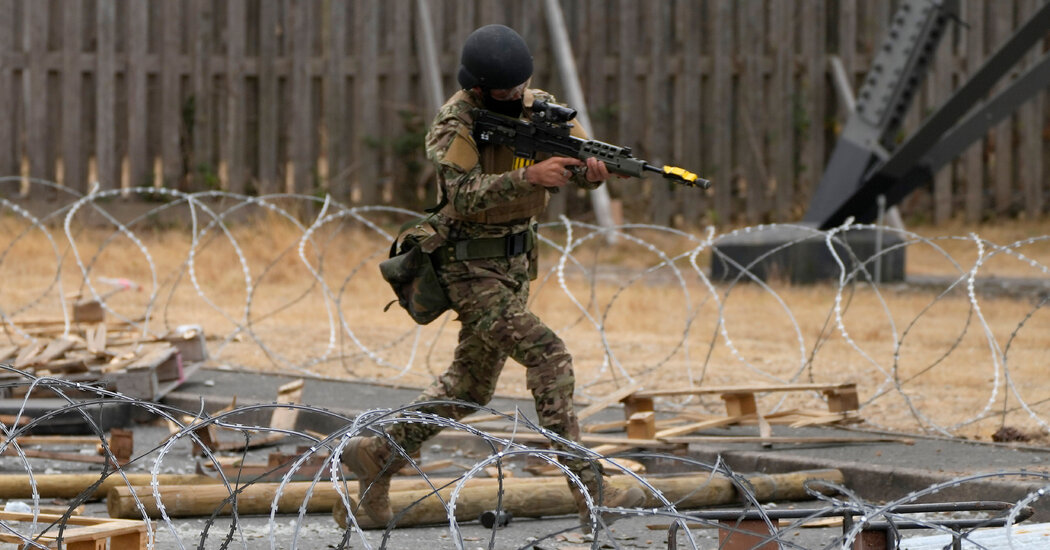 Ukrainian Soldiers Train for the Frontlines on British Soil