DONETSK REGION, Ukraine — Between the cracks of mortar fire and the metallic bangs of Russian self-detonating mines, Yurii, a Ukrainian Army medic, readied an intravenous line for the soldier sprawled on the stretcher below him.

The soldier looked to be in his mid-20s. His face was smeared with dirt and fear.

“Do you remember your name?” Yurii asked.

“Maksym,” the soldier whispered back.

Earlier that morning Maksym had been under a Russian bombardment at the front in eastern Ukraine that had left him severely concussed. Yurii and other Ukrainian medics were tending to him at an aid station barely removed from what has come to be known as the “zero line” where the shelling is relentless.

Daily afternoon thunderstorms had soaked the country roads and wheat fields of Donbas, a swath of rolling fields and coal mining towns that has been the focus of Russia’s military campaign in Ukraine. The sheets of rain turned the bottom of Russian and Ukrainian trenches there into slick mud.

Maybe that is why Maksym was above ground Wednesday morning, having decided to dry out after a damp night.

It is not clear what transpired in the minutes before Maksym was wounded. He was still in shock when his comrades hoisted him out of a pickup truck and handed him to Yurii’s medical crew and the waiting olive drab van-turned-ambulance several minutes later.

“You’re safe,” said Yurii, a former anesthesiologist who was once the deputy head of a children’s hospital in Kyiv, the capital, before Russia invaded. He gave only his first name for security reasons.

“You’re safe,” said Sasha, another medic who had tough hands and a background in massage therapy.

Maksym and his caretakers were certainly not safe.

Overnight, the Russians had fired rockets that had dispensed several anti-vehicle mines around the road and aid station where Yurii and his crew were treating Maksym. Even if the mines are not disturbed, they are set to detonate on a daylong timer.

Ukrainian forces had cleared some of the soda-bottle-shaped explosives, one soldier said, pointing to a video taken on his phone in the predawn darkness that showed troops shooting at a mine until it exploded. But mines were still in the bushes, waiting to detonate.

Yurii and the other medics tried to keep their focus on the wounded soldier. But the immediate demands stretched beyond their checklist of treating intense bleeding or assessing the airway. How to comfort the wounded? How to reassure them that they have survived and made it away from the front? How to give hope even if dozens of their friends have died?

“Don’t be afraid, my friend. You’ve arrived,” Yurii said soothingly as Maksym wormed around on the stretcher, his eyes wide and frantic.

It was clear that in Maksym’s mind, the shelling hadn’t stopped. He was breathing hard, his chest rising and falling in rapid bursts.

“Don’t worry. I am putting the needle in the vein. You’ve arrived, it’s a hard concussion,” Yurii soothed again.

The soldiers who carried Maksym to the aid station piled back in their truck to drive the roughly two miles back to the front line. They were returning to the same task their friend had been carrying out before he was nearly killed: waiting for a Russian attack or for an incoming Russian artillery round to find them.

As they departed, a soldier beyond the trees yelled “Fire!” A Ukrainian mortar launched a shell toward Russian positions. Smoke drifted up from the firing site.

The artillery war in Ukraine’s east is seemingly never-ending. Even without either side attacking or counter attacking, the shelling is constant — wounding and killing and driving those soldiers cowering in trenches and foxholes slowly insane.

At the sound of mortar fire, Maksym lurched on the stretcher once more.

Maksym’s breathing slowed. He covered his face with his hands and then looked around.

The first complete thought Maksym organized and communicated was a string of expletives directed at the Russians.

“Go on, talk to us. You got a wife? You got kids?” Yurii nudged, seizing the opportunity to bring Maksym back among the living.

“The shrapnel,” he muttered.

“Shrapnel?” Yurii asked. He was surprised. Maksym was clearly concussed, but showed no signs of other wounds.

“He’s got shrapnel right here, and here,” Maksym said, his voice trailing off. The medics quickly realized that he was talking about his friend who was wounded when the Russian artillery struck earlier.

“He’s been driven away, taken to the hospital,” Yurii said, though the medic had no idea what had happened to Maksym’s friend. He was just trying to keep his patient from panicking again.

“Is he alive?” Maksym asked cautiously.

“He has to be,” Yurii replied, though he didn’t know.

For Yurii’s ambulance crew and other medics assigned to the area, these types of calls are common. Some days they wait a few miles from the bus station-turned-aid station, the determined pickup point between the front lines and safety, and their 24-hour shift ticks by uneventfully: Yurii calls his wife several times a day. Ihor sleeps. Vova, the son of an armorer, thinks about how to modernize Ukraine’s Soviet-era weaponry.

Other days the casualties are frequent and the medics are left with a constant rotation between the hospital and the aid station as they place bloodied men with tourniquets strapped to their extremities in the back of their ambulances.

Yurii stared down at Maksym, encouraged by his newfound ability to communicate.

Maksym put his hand behind his neck and pulled away, looking at his appendage, almost expecting blood to be there.

“We were all covered by shelling,” Maksym said quietly.

“It’s all good, you’re alive,” Yurii said, trying to change the subject. “The main thing is you did well. Good lad.”

As Yurii readied the stretcher and Maksym for the ambulance, an aging red sedan, a Russian Lada, pulled up to the aid station. The Soviet-era staple came to an abrupt halt, practically skidding on the churned up pavement.

The dust settled. In the distance artillery thudded in a familiar rhythm.

A man in a baggy gray T-shirt, clearly distraught, jumped from the car’s driver seat. The passenger opened his door and yelled: “The woman is wounded!”

She was an older woman named Zina, they would soon learn, and she was facedown in the back seat.

Another group of medics would take Maksym to the hospital while Yurii’s crew handled the newly arrived patient in the sedan, the medics decided.

The two men who had driven Zina to the aid station — her husband and her son-in-law — had asked Ukrainian military positions near their home where to take her after shrapnel from an artillery blast struck her head. The troops had directed them to Yurii’s aid station.

In the Lada, Zina’s blood had begun to pool on the fabric. She seemed to be at least in her 50s, unconscious, another civilian wounded in the four-month-old war, like so many who have been caught between the guns of this war.

“Get the stretcher!” Yurii called.

It was not quite 11 a.m., and another of the Russian-strewn mines suddenly exploded near the aid station. 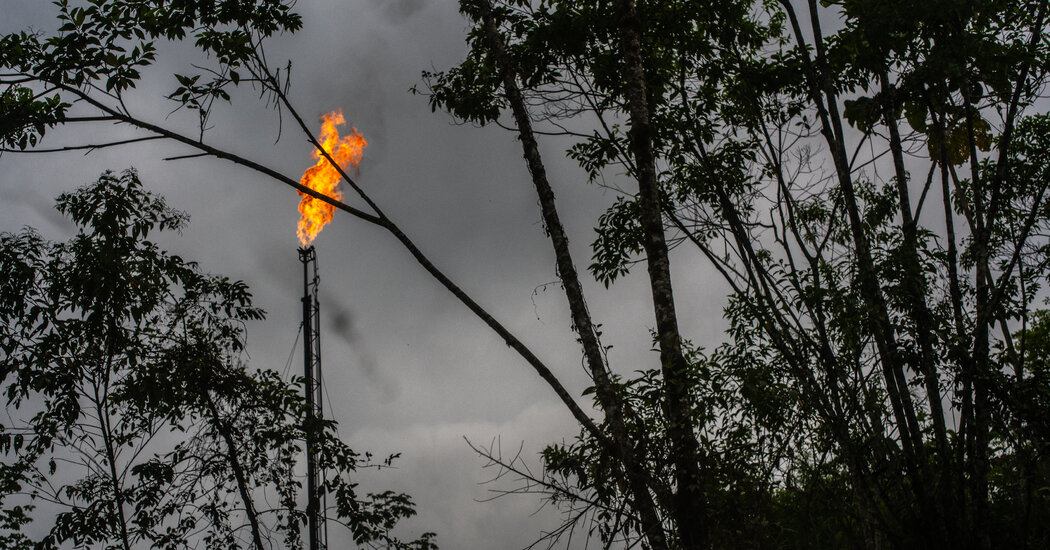 In the Amazon, a U.N. Agency Has a Green Mission, but Dirty Partners