Gene Simmons, the rockin’ KISS Demon himself, has some advice for Kanye West, the hip-hop artist legally known as Ye who just divorced from Kim Kardashian and apparently holds resentment for the celebrity personality’s new partner, comedian Pete Davidson.

Simmons spoke to the subject this week when asked by TMZ. That’s likely because West’s recent music video with fellow rapper The Game, for the pair’s January single “Easy,” seemingly visualizes violence toward a claymation Davidson stand-in, as Today reported.

So what does Simmons think? Watch the video down toward the bottom of this post.

“For the record, he’s a talented guy, there’s no question about it,” the KISS bassist and vocalist says of Kanye before adding, “he’s out of his mind.”

Ye is often upfront about his mental health issues, once saying he had bipolar disorder. Romantically, Ye has lately been linked with First State Behavioural Health COO Chaney Jones, according to The Tab. She was described as a Kim “lookalike” by the Daily Mail.

Calling the situation “serious,” Simmons continues, “[Kim] is your wife, the mother of your children. It’s not childish. There’s something clinically wrong with him, as he’s admitted. It’s a psychological problem. … Pete’s a cool guy, takes the high road. Just ignore it.”

Further, Simmons suggested West should be grateful for his circumstances and find a fulfilling activity outside of entertainment.

“You’ve got a roof over your head, you’ve got food in your tummy,” he offers as if addressing Kanye. “You can do whatever you want. Get a hobby — that’s better. Leave him alone, move on. Love your kids, love the mother of your kids. Let her make her own decision. She’s a grown-ass woman now, and she doesn’t need your permission. Being like that publicly, getting a Kim lookalike — it’s childish.”

He adds, “And it’s not fair to this girl who happens to resemble Kim. Good for you, resemble anybody or anything. But don’t be a hand puppet to somebody who’s playing some kind of game. He needs to back off. He’s not a bad guy, but this is not even childish. … He admitted there’s something clinically wrong.”

Among the rock star’s practical suggestions, however, Simmons did recommend one more confrontational solution for those involved, if required.

“You know, at a certain point, if everybody misbehaves, a good bitch slap,” the KISS singer illustrates — “Oh, sorry, I didn’t realize I was such an asshole.”

16 Things Metalheads Really Need to Get Over

Get over it! Here are 16 things that metalheads really should get over. 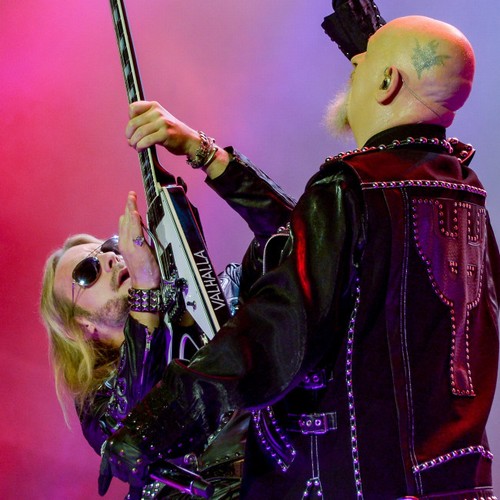