Bale’s Burt Berendsen is a folksy doctor with a glass eye that keeps falling out. He’s hooked on his own homemade pain meds, which cause him to collapse to the ground—which also causes his eye to fall out. Bale is doing intense shtick throughout; he is committed to the bit. Washington’s Harold Woodman served with him in the same racially mixed Army battalion in France during WWI; he’s now an attorney, and the more levelheaded of the two. When their beloved general dies suspiciously, his daughter (a distractingly stiff Taylor Swift) asks them to investigate.

But soon, they’re on the run, inspiring a flashback to how they met in the first place. This is actually the most entertaining part of the film. Russell luxuriates in the duo’s wistful memories of their post-war years in Amsterdam with Robbie’s Valerie Voze, the nurse who cared for them when they were injured and quickly became their co-conspirator in all kinds of boozy escapades. The celebrated cinematographer Emmanuel Lubezki, a multiple Oscar winner for his work with Alfonso Cuaron (“Gravity”) and Alejandro Gonzalez Inarritu (“Birdman,” “The Revenant”), eases up on the sepia tones that often feel so smothering in an effort to capture a feeling of nostalgia. There’s real life and joy to these sequences in Amsterdam that’s missing elsewhere. Robbie, a brunette for a change, looks impossibly luminous—but her character is also a Manic Pixie Dream Girl, a secretly wealthy heiress who turns bullet shrapnel into art. It’s a heavy-handed metaphor for the healing presence she provides in Burt and Harold’s lives.

That’s what’s so frustrating about “Amsterdam”: It’ll offer a scene or an interaction or a performance here or there that’s legitimately entertaining and maybe comes close to hitting the mark Russell is trying to hit. Several duos and subplots along the way might have made for a more interesting movie than the one we got: Malek and Taylor-Joy as Valerie’s snobby, striving brother and sister-in-law, for example, are a bizarre hoot. (And here’s a great place to stop and mention the spectacular costume design, the work of J.R. Hawbaker and the legendary Albert Wolsky. The period detail is varied and vivid, but the dresses Taylor-Joy wears, all in bold shades of red, are especially inspired.) Nivola and Matthias Schoenaerts as mismatched cops who can’t stand each other can be amusing, and it seems like they’re really trying to infuse their characters with traits and motivations beyond what’s on the page. Shannon and Mike Myers as a pair of spies are good for a goofy laugh or two, nothing more. 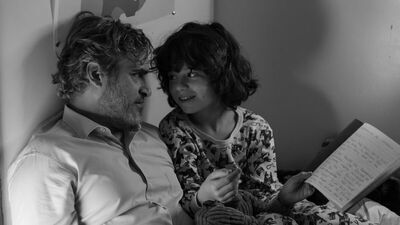