As the first vehicles from the trucker convoy started appearing on Ottawa streets, some Twitter users shared a particular photo: a pickup truck with a confederate flag flying from the bed.

Now, as the convoy descends on Ottawa with the stated aim of opposing all COVID-19 mandates, anti-hate experts allege those with white nationalist and Islamophobic views don’t just represent the fringes of the movement but are among the organizers of the convoy.

“We’re saying that this is a far-right convoy because — from day one — the organizers themselves are part of the far-right movement,” said the Executive Director of the Canadian Anti-Hate Network, Evan Balgord.

“They have previously been involved in far-right movements and have made Islamophobic comments in the past.”

It can be difficult to determine who is a key organizer of the convoy, but there are some names that emerge time and time again — whether as authors of the $7.4 million GoFundMe, as points of contact on the website that boasts a petition with 240,000 signatures, or on social media posts providing widely-shared directions to anyone hoping to join.

Global News contacted all the organizers mentioned in this story, but none responded by the time of publication. Jason LaFace, an Ontario organizer, did pick up the call, but upon the reporter identifying themselves, immediately laughed, said “no thank you,” and hung up the phone.

What does the convoy want?

The convoy initially kicked off with a focus on opposing vaccine mandates — especially the one aimed at truckers. The government announced in November 2021 that all Canadian truckers seeking to cross the border from the United States would need to be vaccinated in order to avoid a 14-day quarantine. That mandate went into effect on Jan. 15.

The United States also instituted its own ban on unvaccinated truck drivers a week after Canada implemented its policy.

In the days since the trucks hit the road, the stated goal of the movement has become muddied. 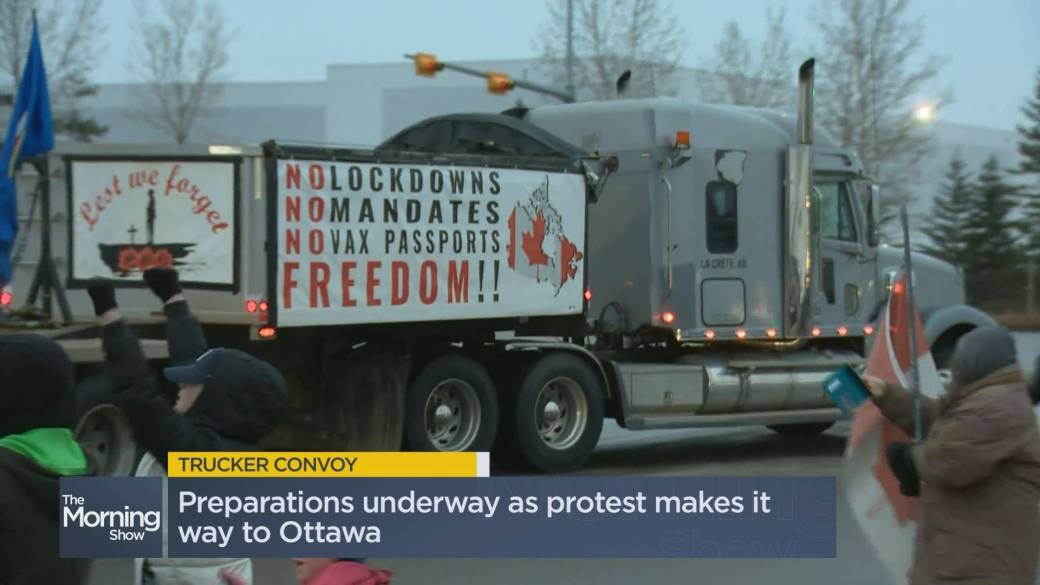 3:58David Akin updates on the trucker convoy headed for Ottawa

David Akin updates on the trucker convoy headed for Ottawa

One trucker who is headed to the protest, Brigitte Belton, told Global News in a Friday interview that her goal is “to get freedom back,” and that she is “not here for politics.”

Commenting on other participants whose goals may be more extreme, she said “whatever their agendas are, that’s not what we’re here for. So they need to be quiet. They need to go home.”

“The GG wouldn’t dismiss a Cabinet that hasn’t lost the confidence of the Commons … moreover, the GG has no authority to independently rescind laws or regulations,” said parliamentary expert Philippe Lagassé.

Who is organizing the convoy?

The convoy has a number of participants with different goals and isn’t cohesive, but some popular webpages help paint a picture of the people behind the convoy.

There is a GoFundMe page that has raised more than $7 million for the trucker convoy. That fundraiser has two names on it: Tamara Lich, and B.J. Dichter.

Speaking to a cheering crowd at a People’s Party of Canada convention in 2019, B.J. Dichter warned listeners about the dangers of “political Islamists,” and said the Liberal Party is “infested with Islamists.”

He added that, by meeting “with extremists,” Conservative and “establishment” politicians “put at risk moderate and secular Muslims, who want nothing more but to integrate into Canada, to become Canadian, and to leave the garbage of their birth country behind them.”

“Despite what our corporate media and political leaders want to admit, Islamist entryism and the adaptation of political Islam is rotting away at our society like syphilis,” he added, according to a story written for the Toronto Star by Alex Boutilier, who is now employed by Global News. 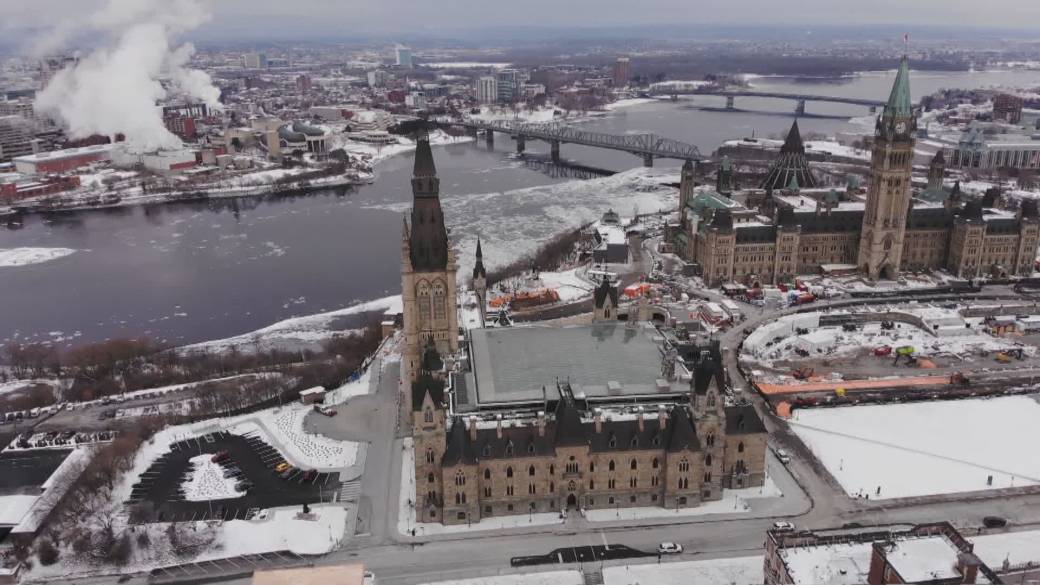 Another dominant voice within the convoy community is a man named Patrick King. King is listed as a contact for North Alberta on Canada Unity’s website, which hosts the memorandum of understanding that boasts more than 240,000 signatures.

King’s name was repeatedly mentioned on the convoy’s walkie-talkie app, Zello, on Friday — but he has ended up in the public eye for different reasons in the past, according to footage posted online.

In a video posted on Twitter in 2019, King suggests that unless Canadians “get up off your as—s and demand change,” they might want to change their names to “Ishmael” or “drop a bunch of change down the stairs” and  “call yourself chong ching ching chang.”

In other video footage, King can be seen repeating racist conspiracy theories. In one clip posted to Twitter by another user, King says “there’s an endgame, it’s called depopulation of the Caucasian race, or the Anglo-Saxon. And that’s what the goal is, is to depopulate the Anglo-Saxon race because they are the ones with the strongest bloodlines,” he said.

“It’s a depopulation of race, okay, that’s what they want to do.”

He then talks about men with the first names “Ahmed” and “Mahmoud” who he claims are trying to “not only infiltrate by flooding with refugees, we’re going to infiltrate the education systems to manipulate it” so there is “less procreation” which leads to “less white people — or you know, Anglo-Saxon. Let’s say Anglo-Saxon, because when I say white, all the ANTIFA guys call up the race card.”

In a Facebook Live posted directly to his page, King says that COVID-19 is “not a naturally occurring virus.”

“It’s not a naturally occurring virus, it’s a man-made bioweapon that was put out to make people sick, to push the narrative for all these jabs, is what it was,” he said.

“Because the jab is the, they want to be able to track you, follow you, know your every movement you do.”

King did not answer two phone calls or respond to emails from Global News.

Jason LaFace — who at times uses the name “LaFaci” — is listed as the North and East Ontario organizer for the convoy on the Canada Unity website, and has been cited in other media as the main organizer for Ontario. In photos posted to his Facebook page, which were screenshotted by Global News, he shared an image titled “Canadian politicians who are not born in Canada” and included his own caption: “traitors to our country.”

According to a screenshot obtained by Global News, LaFace posted a selfie where he wore a hat with what appears to be the initials S.O.O., which is believed to stand for Soliders of Odin — an anti-immigrant group first established in Finland.

The emergence of the far-right Soldiers of Odin group in Canada raised concerns about the potential for “anti-immigrant vigilantism,” according to a de-classified intelligence report obtained by Global News in 2017.

“One of the admins on their website is actually somebody who’s like the vice president of the Soldiers of Odin, a skinhead group in Sudbury, Ont.,” said Dr. Carmen Celestini, a post-doctoral fellow at The Centre on Hate, Bias and Extremism and an adjunct professor at the University of Waterloo.

“His name is Jason LaFace. He also uses other names, but he is a vice president of this group, which organize events that will try to stop immigration, people who are BIPOC or people who are in LGBTQ communities.”

“Last summer,” she added, LaFace posted a message on Facebook indicating that he planned to “paint over a mural in Sudbury for (Black Lives Matter).”

LaFace later apologized, saying he “should have researched a bit more what was going on in terms of the mission and why it was sanctioned by the city.”

“I apologize for my behaviour to the entire city,” he said, according to the Sudbury Star.

However, LaFace showed a slight change of heart in a recent Facebook Live.

“This whole moment in history right now has changed my life for better, for the rest of my life,” LaFace said.

“I’m not a bitter little a–hole like I used to be, where I was pretty ignorant to some people online.”

However, in that same video, LaFace also issued a message about Prime Minister Justin Trudeau.

“There’s things that are working in the background right now, that I found out this morning, Justin Trudeau is going buh-bye. It’s true, he is,” he said.

“It’s done, so now we just have to deploy our plan … he’s gone when we’re done.”

When Global News attempted to contact LaFace for a comment, he said “no thank you” and hung up.

Muddying the convoy’s cause

As the ideologies allegedly supported by a number of the convoy’s organizers make headlines, some truckers are getting frustrated.

Belton is a trucker who has been regularly making TikTok videos about the convoy and plans to attend Saturday’s protest. She is also listed as a Sarnia contact on the Canada Unity webpage.

Singh’s brother-in-law has asked for his $13K trucker convoy donation back, source says

Lich, an organizer of the truck convoy, said in a video posted to the convoy’s Facebook page that those promoting violence or hate do not reflect the position of the protesters.

“As you know, we are on our way to Ottawa to hold a peaceful protest. I just want to put it out there that nobody in this convoy will be inciting violence or uttering threats. That is not what we’re here to do,” Lich said in the video.

“If you see anybody trying to associate themselves with us that is acting in that way, you need to get their truck number and their licence plate and report it to the police.”

For some, the individual views of organizers aren’t as important as what they’re doing for the cause.

When Belton was asked specifically about organizers and told some of what Global News had uncovered about LaFace and King, she said the information about the purported views is “irrelevant” for her.

“All I know is that they’re good people to me and they are helping me.”