The race to become the next leader of the Conservative Party appears to be Pierre Poilievre’s to lose, according to a new poll, that also suggests he may not be able to broaden the party’s appeal.

In fact, the poll found Charest is viewed more favourably among Liberal voters (40 per cent) than Conservatives  (27 per cent) while Poilievre — who nearly half of Liberal and NDP voters view negatively — is seen by 50 per cent of Conservative voters as the most favourable candidate.

“One of them is very popular with the party, but not outside the party. And the other one, the exact opposite is true. So Conservatives have a clear choice ahead of them.”

Ipsos interviewed over 1,000 Canadian adults between Thursday and Tuesday for the poll.

It comes as Poilievre, a longtime Ottawa MP already popular with the Conservative base for his attacks on the Liberal government, is leading the crowded field in spending and hosting big crowds across the country.

Charest, the former Quebec premier and leader of the now-defunct federal Progressive Conservatives, made a splash when he entered the race last month by promising he could broaden the Conservative tent — in part by bringing in more votes from Quebec.

Yet the Ipsos poll found 51 per cent of Quebecers surveyed view Charest negatively, compared to 37 per cent who have a favourable view.

“If Quebec was meant to be a strength for Charest in seeking the leadership, and then ultimately as leader delivering those votes from Quebec, this data doesn’t suggest that he’s able to do that,” Simpson said.

“In fact, he might be running for the wrong party,” he added, pointing to Charest’s relatively high support among Liberal voters and the 40 per cent of Conservative voters who viewed him unfavourably. 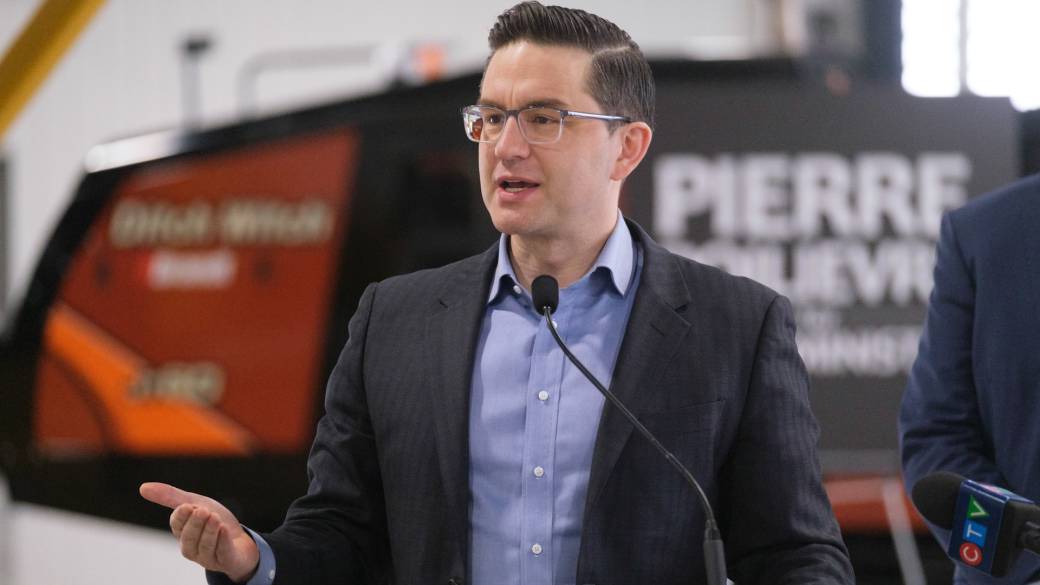 The poll suggests the race is largely between Poilievre and Charest, with anywhere between 60 and 73 per cent of Canadians surveyed saying they did not know enough about the other nine candidates to have an opinion about them.

Even among Conservative voters, 55 per cent said they don’t know enough about another top rival, Brampton Mayor Patrick Brown, while only 20 per cent said they viewed him favourably. Nearly 60 per cent of Tory voters said they are unfamiliar with MP Leslyn Lewis, who is running for the leadership for the second time in as many years.

Only Poilievre and Lewis saw net positivity among Conservative voters surveyed, with more viewing them favourably than unfavourably. Among Canadians in general, all of the candidates were seen more negatively than positively.

Besides Poilievre and Charest, less than five per cent of Canadians said they either wanted any of the other candidates to win the leadership, or believed they could win.

Jean Charest says he can win. But what do Conservatives want to hear?

While Simpson says next month’s debates could change the field slightly, the data suggests the two frontrunners will remain at the top of the pack until the winner is crowned on Sept. 10, with other candidates moving to endorsements as the race goes on.

“Ultimately, it’s up to Conservative members to decide who they want to lead them,” he said.

“But again, a very stark choice between a smaller but perhaps more unified party, or a larger party that has maybe some more factions that are going to be difficult to manage.”

These are some of the findings of an Ipsos poll conducted between April 14 to 19, 2022, on behalf of Global News. For this survey, a sample of 1,001 Canadians aged 18+ was interviewed. Quotas and weighting were employed to ensure that the sample’s composition reflects that of the Canadian population according to census parameters. The precision of Ipsos online polls is measured using a credibility interval. In this case, the poll is accurate to within ± 3.5 percentage points, 19 times out of 20, had all Canadians aged 18+ been polled. The credibility interval will be wider among subsets of the population. All sample surveys and polls may be subject to other sources of error, including, but not limited to coverage error, and measurement error How a corrupt Dominican senator, sanctioned by U.S., is blocking a Canadian gold mine