Friends and family are preparing to be divided as the Calgary Flames and Edmonton Oilers rekindle their hockey rivalry in the NHL playoffs this week for the first time in 31 years.

In some cases, the battle lines are physically marked. For neighbours Wes Real and Travis Burndred, it’s the street that separates their two houses in Lethbridge, Alta.

“There will be some flags hanging in my window pretty soon,” said Burndred, a Flames fan.

“It’s pretty much decorated Flames in there,” Real said of his neighbour’s home, while wearing a Wayne Gretzky jersey. “I’m a little more conservative.”

Battle of Alberta hockey allegiances split in Red Deer: ‘You can’t like both’

The two have lived across from each other for four years and the rivalry doesn’t stop, even when the pair hit the links together.

“We’ve got golf bags,” Real said. “His is a Flames bag and I’ve got an Oilers bag. We stick to our teams, that’s for sure.”

And the competition heats up whenever the Battle of Alberta is on.

“I want Calgary to show the reason why they got first place in the division and live up to the hype,” Burndred said.

For others, the division is within their own home.

“We’re not going to be very happy with each other over the next few weeks,” Jack Fehr said.

The Fehrs are split down the middle. The family of five from Lethbridge has three members under their roof cheering on the Flames and the other two supporting the Oilers.

Remember when? Battle of Alberta set for Wednesday after 31-year hiatus

The battle has been ongoing for years.

When Karalee and Nathan Fehr began dating, Nathan lost a bet and had to wear an Oilers jersey out to dinner. At their wedding, the DJ provided live game updates for the Flames and Oilers game that was happening at the same time.

Now the rivalry is onto the next generation, with their kids Jailen, Jack and Carter choosing sides.

“(Nathan) said very early on I didn’t get to influence our boys — if we had boys — on what team they would cheer for,” Karalee said. “So I took every opportunity to make my daughter understand the true way and she became an Oilers fan all on her own.”

They’re preparing for what could potentially be a 13-day Battle of Alberta. So are Candice Pohl and Shane Duff, who make no secret about their allegiances.

The Lethbridge couple currently have a flag reading “House Divided” with the Flames and Oilers logos hanging in their front window and another in their basement.

“Our first meeting, we just hung out and started reminiscing and then he came back that evening,” Pohl said.

“It happened to be a Battle of Alberta game and he wore his (Oilers) jersey. I wore my (Flames jersey) and we’ve been rivals ever since. But we’ve also been in a committed relationship ever since.”

Series between Edmonton Oilers and Calgary Flames going to be a true battle: Gretzky

The opposing parties said the key is accepting each other’s sports affiliation faults and co-ordinating the decor.

“Game 1, I get choice of lights, so it will be red and yellow,” Pohl said. “Game 2 will be blue and orange and we’ll just alternate.”

“We’ve made it this far, so maybe we can make it through the next few weeks,” Karalee said.

One thing that everyone shares, is the excitement over the Battle of Alberta’s return to the playoffs.

“There’s some major talent on both teams,” Pohl said.

“We couldn’t be more pumped as a couple and rivals as well.”

“It’s pretty cool to have both the Alberta teams,” Real said. “That’s what we were hoping for.” 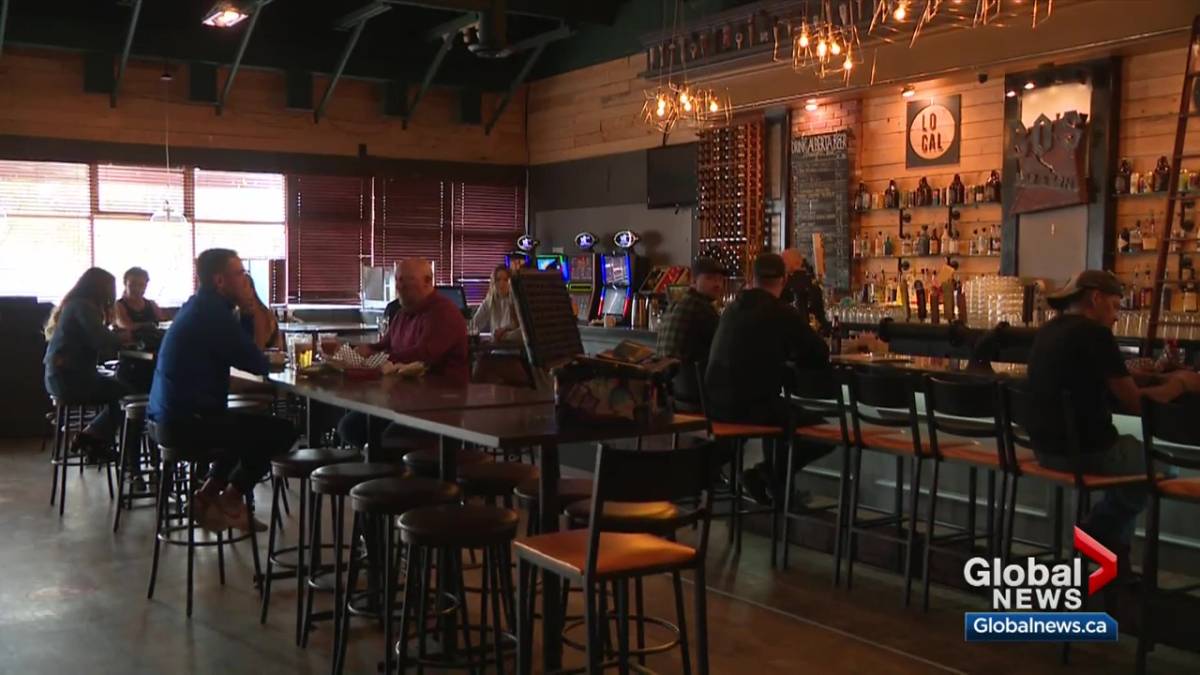 But there’s no agreeing on the series outcome.

“I don’t think it’ll be a sweep, but I’m fully confident in the Oilers,” Karalee said.