Candidates running to become the next leader of the Conservative party need to focus on portraying themselves as capable of winning the next general election and avoid “nasty” attacks on each other, former leadership candidate Peter MacKay says.

In an interview with Eric Sorenson on The West Block Sunday, MacKay — who narrowly lost the leadership to Erin O’Toole in 2020 — said Thursday’s often contentious debate among five of the six candidates was “off-putting” to Canadian voters who will need to be swayed if the party has a hope of toppling the Liberals.

“Frankly, I don’t think the overall public impression of Canadians is positive,” he said.

“Leadership contests by design are intended to test the mettle of potential leaders and their ideas, and to see if they’re tough and are able to defend and, more importantly, articulate those ideas and vision.

“But when it becomes personal, when you see some of the really pointed (and) nasty exchanges on display in that debate, I don’t think it bodes well.”

Much of the unofficial debate was dominated by apparent frontrunners Pierre Poilievre and Jean Charest, who spent the evening exchanging attempted haymakers and accusing the other of being unfit to lead the party into the next election.

Fellow candidate Leslyn Lewis, who faced MacKay in the 2020 leadership race, also hurled several attacks at Poilievre for not sufficiently supporting the convoy protests and avoiding taking a firmer stance on abortion.

MacKay suggested aggressive tactics like these, while popular among some parts of the Conservative base, may not appeal to the general public.

“Let’s never lose sight of that fact: it’s about competitiveness in the next general election,” he said.

“I think Conservatives have to be, frankly, quite concerned about three elections (lost). A possible fourth electoral loss is very hard to swallow for members of this party.” 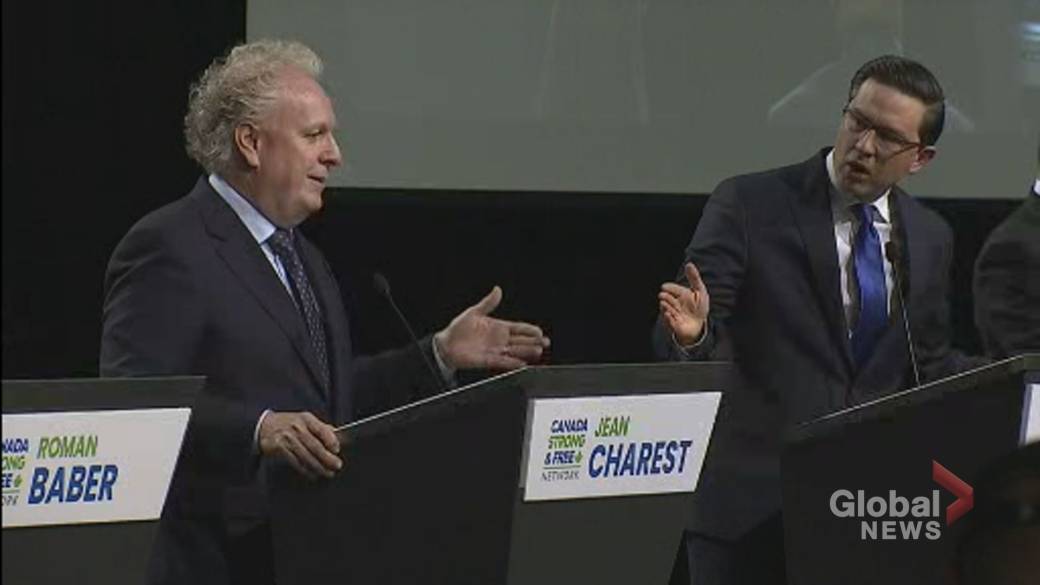 2:01Poilievre demands Charest clarify how much money he received for his work with Huawei

MacKay had positive notes for Scott Aitchison and Roman Baber for giving more “calm and deliberate” performances on the debate stage. Patrick Brown skipped Thursday’s debate, but will appear at the official debates in Edmonton on May 11 and in Laval on May 25.

But MacKay suggested Charest made a better case for electability by pointing to his experience as premier of Quebec — even if, as Poilievre repeatedly pointed out, Charest was a Liberal at the time.

“It’s certainly something that (Conservative members) are considering: who is the most electable? Who is going to give us the competitive edge?” he said.

“No provincial premier has ever become prime minister of Canada. And Jean Charest makes a compelling case.”

Campaigns have until June 3 to sign up their prospective supporters by selling party memberships.

Sources tell Global News the party is on pace to hit as many as half a million members — almost double the roughly 269,000 eligible voters in the 2020 leadership contest that O’Toole won.

MacKay said the race is currently in the “persuasion” phase as candidates scramble to sign up supporters, which he argues is the most important.

Candidates will not only have to win over their own supporters but also those of other leadership hopefuls in order to secure second and third choices on the ballot — a crucial component once voting and counting begin in September.

“This race is far from over,” he said.

“This first debate was really the proverbial shot across the bow for candidates to make an early impression. But there is a lot (more) and I would suggest the majority are still undecided.”

The next leader of the Conservative party is expected to be announced on Sept. 10.