At the start of March, 48-year-old Victor went from being an oilfield paramedic in northern Alberta, to a combat medic on the streets of war-torn Ukraine.

“When this war started, this was actually my duty, to come here and help,” he said.

The father of two has been in Ukraine twice before — in 2018 and 2019 — helping the military. His girlfriend is Ukrainian and she decided to stay and fight for her country when the war broke out two months ago.

Victor said in her first night of sleeping in a barracks, it was targeted by Russians.

“They got heavy artillery barrage, they got shelled.

“She texted me the last goodbye. She said, ‘I love you. I’ll never see you again.’”

What proceeded was the worst ten hours of his life, he said — thinking the worst. But when his girlfriend told him she survived, Victor decided to join the fight and booked the next flight overseas.

“I left behind my two kids — my daughters. Pretty much everything that I have.”

He said he wants to do something good with his life. Working with a Ukrainian special forces troop, he helps soldiers when they’re wounded. When possible, he helps civilians too.

“Combat first, medic second. Basically I am a soldier. I have all my gear, my gun.”

At one point, he said his team slept under a bridge for days, helping families escape shelling in Irpin.

Victor recorded a number of videos showing the horrors he’s experienced in the seven weeks he’s been fighting. One shows bodies of civilians lining the roads in Bucha.

“I’ve seen people with hands tied behind their backs — they were killed in the street, in their backyards, in their basements. Yes, I have seen that with my own eyes.”

Victor’s shock is captured in the commentary on his videos. He says the destruction is unimaginable.

For Canadians at home, he compared it to documentaries on WWII.

“It’s a full-scale war. The Russians are using everything: heavy artillery, mortars, rocket missiles. Everything. Everything they have.”

In another video, he shows some of the spent weapons lying on the burned ground where an airport once sat in Gostomel.

Victor said his battalion was recently pulled back from the front lines, after suffering heavy casualties. Some of his friends have already died.

“Right now, for the first time in a month-and-a-half, for the last couple days I have a decent bed I can sleep on and a roof over my head,” he said.

He feels this will be a pivotal moment in the war, and has no intentions of coming home now. 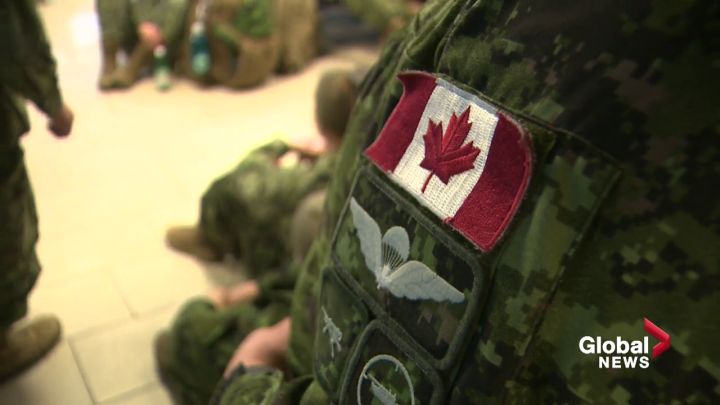 Victor said he’s grateful to Canadians, and the Canadian government, for supporting the Ukrainian military, but added his troop is in desperate need of optical gear like night vision and professional rifle scopes as well as night vision goggles.

Global News is not publishing Victor’s last name due to safety concerns.

He said he could use money for food right now and is accepting e-transfers. Those wishing to help are asked to email [email protected] for information on how to assist.