Crystal Anne With An E comes to us from a sunny clime, though she is an indoor cat that prefers to remain pale. She is an autism consultant by day, and recently completed a degree in information science, mostly because she could and it was fun.

She likes to read (obviously), watch TV while cross-stitching something geeky, play video games, beg her plants not to die in the hell heat of summer, and walk while listening to podcasts that likely involve some sort of murder.

So we know how I do love a Star Wars story, and lo, the SW gods, and Beth Revis, have blessed us with a book that leans into the romance of it all. I took one look at the cover art of The Princess and the Scoundrel and was like

Look at this cover art. Sit with it. Let it get into your brain. 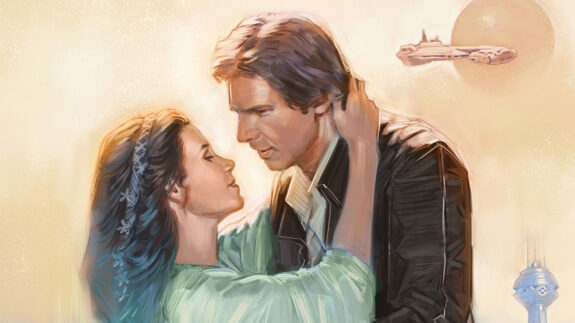 The soft watercolors. The EMBRACE. The loving expressions on their faces. The flowers in her hair. This, kids, is a romance cover. I submit it would make a worthy entry into the Cover Awe canon.

The book opens immediately after the fall of the Empire. And by immediately, I mean you’re still having to occasionally dodge pieces of raining Death Star. Leia is looking at the aftermath of the rager thrown at the end of Return of the Jedi and wondering about what kinds of people were wearing the stormtrooper helmets that were recently being used as a drum set.

This is the beginning of a theme that will continue throughout the book: the fact that Leia is acutely aware of the human cost of war. She wonders about the people that were in those helmets in a way that no one is considering as they drum on them, whether they were indoctrinated, whether they even had any choice in their service to the Empire. She cares, even as others are dancing jubilantly around them.

This awareness is also what contributes to the fact that Leia, throughout the book, has enormous difficulty taking the time for herself and her new husband that she has certainly earned. Even as she wants to spend time with him (and doing fun sexytime things with him, these two are VERY hot for each other), she’s constantly worried about resource negotiations and allocations, establishing trade and military alliances before the remnants of the Empire can do so, and putting on the good show for the people.

The relationship between Han and Leia is very interesting, because these people both know each other very well in some ways and in others, not well at all. They are great at reading each other’s cues and body language, but they are not always great at using their words. In addition, they’ve spent no time together that wasn’t involved in intergalactic civil war, and Han was frozen in carbonite for about a year of that time. There is a scene where Leia is affectionately addressing Chewbacca, and it occurs to Han that they have a whole relationship now that he knows nothing about, because he wasn’t there when it developed. Yes, these two are young, hot, and in love, but they know very little about who they are when they’re not trying to not-die.

One thing I tend to really enjoy in fiction is what happens after the immediate fall of an empire, in which the people doing the rebelling basically have to go “Oh, shit, we’re in charge now, aren’t we?” Yes, kids, you broke it, you bought it. It is one of my most appealing forms of catnip.

There is a ton of that in this book, and since Leia is one of the most public faces of the Rebellion and the new government, everything she does, including her honeymoon, is part of the process. In the case of the honeymoon, it means that Mon Mothma lassoes her into a luxury cruise on a Starcruiser called the Halcyon, which had previously been pressed into Imperial service as a battleship.

If this sounds familiar, it’s because the Halcyon is the experience being given to those lucky folks that can afford the very pricey Star Wars hotel and all its trappings.

So, yes, her honeymoon is a publicity stunt, and maybe she’s redirecting the ship’s route to an ice planet to talk to the prime minister about joining the new government. Leia is not great at taking off the princess politician hat and just spending time with her new husband, something that causes Han no small amount of frustration. There was little discussion about what kind of role he would be taking on as the husband of a prominent politician, and he spends much of the book wondering if he’s truly cut out for that kind of life.

They are also dealing with the fact that even though the Empire is defeated, that doesn’t mean that everyone knows or accepts that. Rumors persist throughout the galaxy that Palpatine is still alive, and there are Imperial loyalists that are actively and openly hostile toward Leia and Han, whether they blame them for the death of a relative that worked on the Death Star or they are now broke because all of their military contracts were canceled. It is always fun to watch especially Leia navigate these kinds of shark-infested waters. She’s a good person, but she’s also sneaky and able to assess advantages and then use those advantages.

Another interesting piece to the character work in this book was the fact that Han and Leia are both processing massive trauma throughout the book, and it absolutely informs much of what they do. In Leia’s case, she has only recently learned of her lineage as the biological daughter of Darth Vader. This news is especially traumatic for her due to the fact that Leia was mentally and physically tortured by Vader, and it is highly difficult for her to reconcile the fact that the man that inflicted that pain upon her was her own father.

It also presents her with a certain amount of conflict over the idea of learning how to use the Force, since she strongly associates its use with Vader. Her lineage is also much of the reason that she is so determined to accomplish as much as she can while she can, as she is operating under the belief that once her parentage becomes public knowledge, she’ll never be able to work in public service again (and sadly, she’s completely correct, as this very scenario comes to pass years later during the events of Bloodline).

Meanwhile, as far as Han goes, this is a man that has only been out of carbonite for a matter of a few weeks, and is still acutely aware of it in his body. He feels very out of step, as he missed so much during the year he was frozen. In addition, he still remembers vividly the feeling of being frozen, in the dark and cold, but still conscious. There is one scene where he has to go diving in very cold water, and is initially shocked by how severely and instantly he is reminded of his experience.

Han and Leia are instrumental in helping each other cope with their trauma. As he initially goes rigid with the sensory memory of his freezing, his wife takes his hand and helps him to center himself. When Leia confesses her fears about using the Force because of what Vader was, it’s Han that points out that Luke’s not Vader, and she’s not Luke, and that her use of the Force, should she choose it, was just that, her use and no one else’s.

Like most Star Wars properties, this book is carrying around tons of plot, mostly revolving around trying to aid and save an Imperially-oppressed planet that they visit during their honeymoon, and will probably appeal most to someone who has read some of the other books that feature Leia, including Claudia Gray’s Princess of Alderaan (which is directly referenced) and Bloodline, and Rebecca Roanhorse’s Resistance Reborn. I believe there are some fairly direct references to some of Han’s stories as well, but since I hadn’t read the stories in question, my understanding was a bit cursory.

Now, the big question (drumroll please), is this a Star Wars romance novel?

You had to know I was going to find a way to drop Sexy Obi-Wan in here.

Well….if you’re going at it from the idea of a romance novel having the HFN ending, sure. They end this book as a happy couple, at the beginning of building a life together. But as a HEA, I saw the movies. I know that they will build that life, they will have a child, and eventually, that life will crack apart and set them on different paths by the time of The Force Awakens. They will love each other until their dying days, but they won’t be together. However, their romance is central to this particular story, so if that’s why you’re here, you’ll enjoy it.

I would be remiss in saying that if you enjoyed this story, Princess of Alderaan and Bloodline by Claudia Gray are also great Leia stories, and Beth Revis has written a story about Jyn Erso from Rogue One called Rebel Rising, which, while I haven’t read it, I enjoyed this story enough that I am likely to go track it down.

There’s also a popular and well-regarded alternate take on Han and Leia’s story from the Legends canon (the story universe that was thrown out when they decided it was time to take us back to a galaxy far, far away), The Courtship of Princess Leia by David Wolverton.

So all in all, good solid B+ for lots of plot, hot couple, and Ewok ragers.

This book is available from:

We also may use affiliate links in our posts, as well.
Thanks!

Star Wars: The Princess and the Scoundrel by Beth Revis